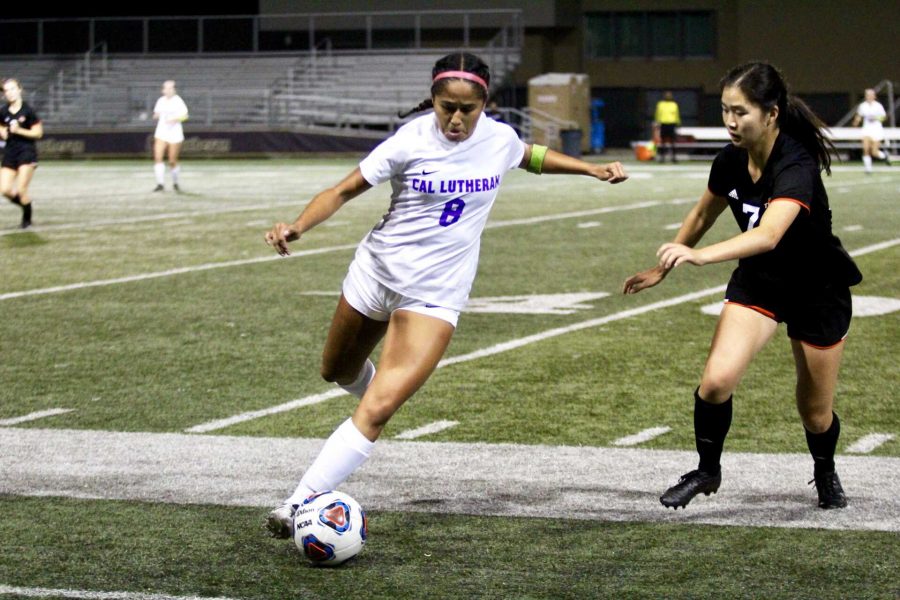 Sophomore defender Trinity Martinez goes up against Occidental senior midfielder Katherine Kim. The Regals and Tigers battled for 110 minutes, before ending the game in a scoreless tie. Photo by Christie Kurdys - Photo Journalist

The California Lutheran University Regals soccer team took on the Occidental University Tigers in a hard-fought draw on Saturday, Oct. 6.

With the Tigers kicking off the first half, both teams came out strong. The Tigers quickly took the shot lead with six shots against the Regals’ four.

“The big thing was making sure that we were communicating in the middle,” said Kiki Bailey, assistant coach and goalkeeper coach.

Moving into the second half, the Regals had an aggressive start, dominating possession of the ball. The Regals took three more shots on goal, none of which found the back of the net.

“We just told them they’ve got to communicate. If we can communicate and we can play quicker, we are going to be able to find those through balls,” said Bailey, coming out of the half.

After two scoreless halves, regular play ended with some excitement. As time expired, the lights of the William Rolland Stadium began to dim and then shut off.

The lights were off for about 15 minutes while players, coaches and fans all received a break from the action as the facilities office worked to turn the lights back on.

“It can be a positive or negative. It helped us because when overtime started, we had momentum,” senior midfielder Sarah Tadeusiak said.

Settles said it was a nice break from all the running they had done throughout the game.

With the lights back on, the Regals and Tigers headed into the first overtime period. The Regals started out strong, quickly rushing into the goal box. The Regals’ defense was also strong, only allowing the Tigers two shots against them.

However, both teams’ offenses still came up short, ending the first overtime period at 0-0. This forced yet another period of overtime.

During the second and final period of overtime, neither team could come up with a goal, forcing the match to end in a draw.

“We’ve got to work on our finishing for sure,” Settles said.

The Regals were limited to 10 shots on goal during 110 total minutes of game time.

Flores made a total of seven saves and played an important role in keeping the Tigers from scoring.

“That’s an amazing effort from her…at that point you’ve just got to keep your head in the game and not get distracted by all the little things, so she did a really good job keeping everyone organized,” Bailey said.

Moving forward, Bailey said that the team needs to “just keep working on playing fast, getting our runs in and communicating.”

The Regals now hold a record of 4-2-3 in conference as they face California Institute of Technology on Wednesday, Oct. 10.