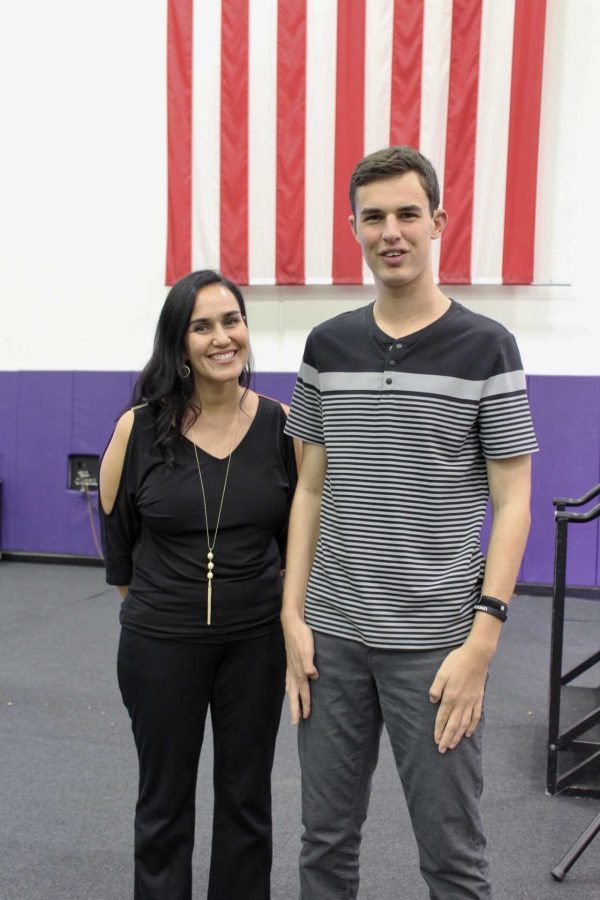 Against all odds: “In mutual respect, we built a very strong and solid partnership that tossed out all the assumptions about the potential of non-speaking students and forged the path we’ve made,” behaviorist Debbie Spelenger (above) said. Photo by Christie Kurdys - Photojournalist

“And then I heard it — ‘Dylan, look at me, I am going to get you out of here, I promise that,” first-year student Dylan Barmache said of an incident that happened in his middle school classroom.

Barmache described being in a special-education class in seventh grade where he was treated like a child even though he said his mind was “screaming to get free.” He met behaviorist Debbie Spelenger who had a different outlook on him and on the special education class.

Slowly over several months, the pair began working together so Barmache could learn how to use a letter board to spell out his thoughts. By eighth grade, Barmache, accompanied by Spelenger was enrolled in all general education classes. He has since graduated high school and started college at California Lutheran University.

Now, Barmache is telling his story in more ways than one. With a theme of creating opportunities for access and success in college for people with Autism, the third annual Spectrum of Opportunity Conference engaged 350 people in Gilbert Sports Arena on Oct. 6.

This year’s conference made a focused effort to increase participation of people with autism. All three keynote speakers were nonverbal autistic college students who shared their journeys to higher education through typed statements that were transcribed on a screen and narrated for the audience.

Activities like an interactive drum circle and table discussions after speaker sessions also promoted participation. A final conference event gave people with autism an opportunity to go in front of the crowd at Gilbert Arena and express what they had learned at the conference.

The Spectrum of Opportunity Conference was founded by Edlyn Peña, a professor in the Graduate School of Education at California Lutheran University who specializes in Autism research. She has been instrumental in organizing the conference, which has quickly gained popularity within a community of parents, professionals and people with autism.

The conference began with a presentation from Barmache. Barmache and Spelenger traded off sharing each side of their journey together from starting in a special education classroom, to using a letterboard to communicate and now to higher education.

Spelenger said she acknowledges the “elephant in the room” as being the difficulty other nonverbal students face in receiving access to education, since there is currently no clear path for typing students in the public school system.

“There needs to be an expectation that non-speaking, limited speaking or unreliably speaking [students] are capable to be educated at grade level given the proper supports and access to communication,” Spelenger said.

Three students who embody the success that proper support and access to communication can provide were the keynote speakers David Teplitz, Hari Srinivasan and Samuel Capozzi. All of the keynotes attend four-year universities, Teplitz and Srinivasan at UC Berkeley and Capozzi at CSU Channel Islands.

Capozzi, a senior and Channel Island’s first non-speaking autistic student, began the keynote presentation with an emphasis on “thriving” and said he believes that autistic individuals  should pursue their own dreams and calling, not those of anyone else.

Capozzi said that the social component of college is one of the most challenging parts, so he makes a concentrated effort to put himself out there.

“Yes I am a glutton for punishment!” Capozzi laughed. He pushes himself to socialize through membership with the academic honors society Gamma Beta Phi and serving on the board of the Ventura County Autism Society.

Srinivasan described his journey to higher education at UC Berkeley with visuals that charted his progress from learning to type in seventh grade to being the valedictorian of his high school.

Srinivasan is now a psychology major and writes for the school newspaper The Daily Californian in the arts and entertainment section. He said that college, “earns us a seat at the table.”

A friend of Srinivasan’s and fellow Berkeley student, Teplitz is a junior studying political science.

Teplitz said that Berkeley is a great place to be autistic because, “Berkeley being Berkeley,” no one notices any of his autistic tendencies.

The atmosphere of the conference was one of a strong sense of community and camaraderie as participants paroused the college information tables between the six different breakout sessions and speaker discussions throughout the day.

Looking ahead, Peña said that next year’s conference might focus on interactions with medical professionals and how to empower people with autism to be self-advocates for their medical care.