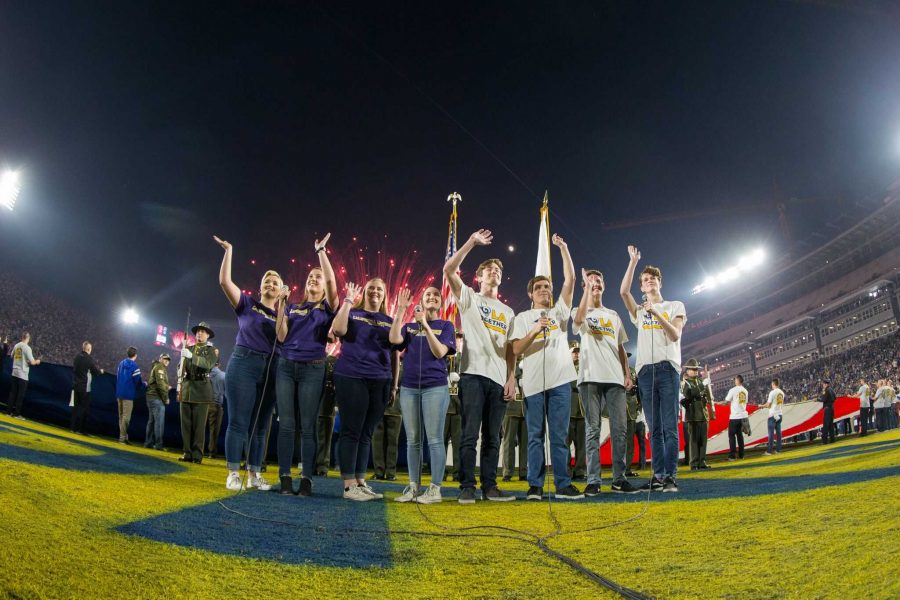 The Cal Lutheran Quartet waves to a crowd of over 70,000 after singing the national anthem on Monday, Nov. 19 at the Los Angeles Memorial Coliseum. Photo by the LA Rams, provided by Karin Grennan- California Lutheran University Media Relations Manager

For three years, the Los Angeles Rams have called Thousand Oaks home, training in plain sight of the painted white CLU rocks on the Mount Clef Ridge at their temporary facility on the northwest corner of California Lutheran University.

But there is nothing temporary about the way the Rams have situated themselves into the Cal Lutheran community. As locals continue to recover from the Borderline shooting and devastating Woolsey and Hill fires, Kingsmen football Head Coach Ben McEnroe praised the organization for its commitment to strengthen its relationship with the university.

“The Rams have become great members of this community,” McEnroe said. “Whether it’s a note of support, community interaction, donations, use of facilities, you name it—we work together and help each other out. Their people have children at our pre-school, we have students who babysit for their coaches and staff, and we work together on little things like that nearly every week it seems like. That’s what community is, and that’s how neighbors should be.”

McEnroe said that Los Angeles Rams Vice President of Community Affairs Molly Higgins reached out to him about donating tickets to the university for the Monday night football game between the Rams and the Kansas City Chiefs on Nov. 19.

After discussing NCAA rules with softball Head Coach Debby Day and Athletic Director Dan Kuntz, McEnroe said that the university decided to give tickets away to the first 80 students who showed up to the women’s basketball game against UC Santa Cruz with two canned goods for local food banks.

Junior Alexa Findley worked the front desk at the women’s basketball game as a student employee for the athletics office. She said that some students waited for over an hour in a line that wrapped all the way around the hallway of Gilbert Sports and Fitness Center. She added that people who weren’t lucky enough to get a ticket still donated canned goods.

“I think this was the perfect solution,” Findley said. “Many Cal Lutheran students have become avid fans of the Rams since they are right in our backyard. So it was a win-win for many students. They got to see their favorite football team and make a difference.”

Senior Hayden Smith said he and his friends planned their entire Saturday around getting in line for the tickets. The four-year quarterback for the Kingsmen is a die-hard Denver Broncos fan as a native of Colorado, but expressed his gratitude for the nearby Rams.

“Just grateful for the Rams for thinking of us in the midst of all the turmoil that has transpired over the past month,” Smith said. “November was a tough one for all of us, so being handed an opportunity to get away and think of anything else and enjoy time with friends was exactly what was needed.”

The Rams had a pair of pre-game ceremonies dedicated to members of the Cal Lutheran community. The organization invited Cal Lutheran alumnus Jordan Helus and his family to light the torch at the Los Angeles Memorial Coliseum before kickoff. Helus’ father, Sgt. Ron Helus, was one of the first responders to the shooting at Borderline Bar and Grill in Thousand Oaks.

The Cal Lutheran Kingsmen and Regals Quartet sang the national anthem in honor of Justin Meek, who was a soloist for the choir and men’s quartet during his time at Cal Lutheran.

“It was a really kind gesture of them, and I think it just shows how much a community can come together when someone like an NFL team can reach out to a university choir that was so directly affected,” said senior Maddy Barnes, a fourth-year member of the women’s quartet.

Barnes said the fellow members of the quartet were honored with the opportunity to perform the national anthem, but described the feeling as “surreal.”

“The feeling is kind of hard to describe because the whole event was so exciting and overwhelming,” Barnes said. “But also the bottom line of why we were there was what we kept coming back to. We were there to sing for the victims and for Justin, and to honor them. That was really important to us.”

Junior Ivy Dyson was not able to make it to the women’s basketball game for the tickets giveaway, but that did not stop her from finding a way to see her fellow students represent the university with the singing of the national anthem.

“My main motivation behind going was to see my friend Dylan Brine sing the national anthem,” said Dyson, who had never been to an NFL game before. “The quartet sounded amazing and I think it was a very nice gesture from the Rams to invite Cal Lu to do that. Plus I ended up witnessing arguably the best game of the regular season thus far and it was honestly an unforgettable experience.”