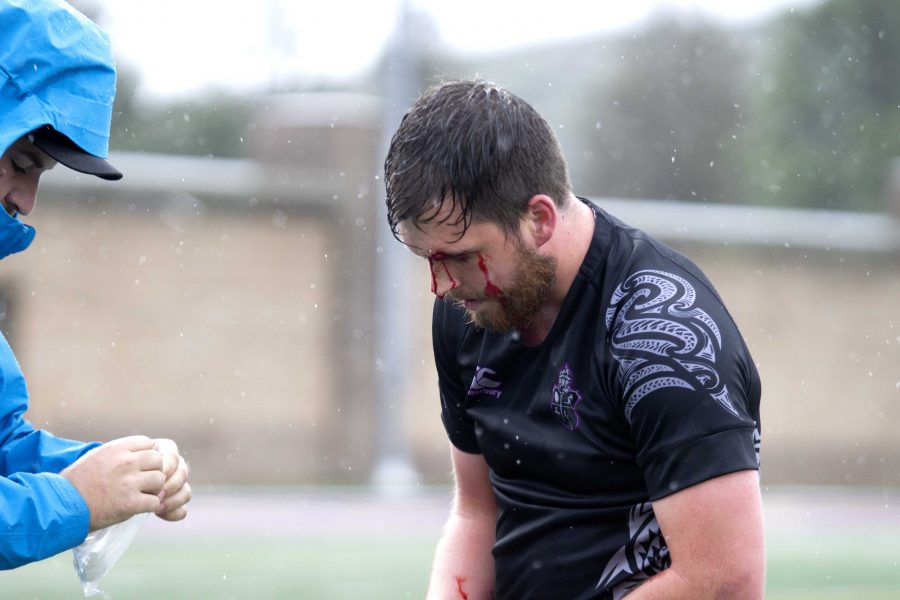 Senior lock/backrow Jack Hoy runs to the sideline to get cuts on his face bandaged up. (Photo by Gabby Flores - Photojournalist)

The win gives the Knights their first victory of the season, moving them up to 1-1 in conference play. The Division II rugby team looks to continue where it left off last year with another strong run to the playoffs in the Gold Coast Conference Intercollegiate Rugby.

Almost 2 inches of rain from Saturday’s storm made for an extremely wet game. However, junior scrum half Austin Malabuyoc was the first to put points on the board as he delivered the first try of the game, giving Cal Lutheran a 5-0 lead.

Senior prop Jarrett Rodriguez had a strong game as the team captain, totaling six tackles and two assists. Scores from Ryan Munoz and center/wing Joshua Lewis were also key in the win.

This season presents new challenges for the Knights as they are overcoming the loss of both experience and talent from last year.

“The way we move forward is to increase our fitness, be able to pass the ball even better and everything technical and basic has to be that much better,” Rodriguez said.

As the game continued, the excitement rose and the scrappiness from both teams showed. Players on both sides were continuously running to the sidelines to get their blood-covered faces rinsed off due to the physical nature of the game.

Junior back row Jake Hitch said he has  played many other sports, but nothing has been quite like rugby.

“It’s the most physical sport I’ve played—nonstop contact and the pace is extremely fast,” Hitch said.

It was a much closer game in the second half as PLNU tied the game 12-12 with 5 minutes left.

In the end, Cal Lutheran proved to be a formidable opponent, closing the game out dominantly and securing the 19-12 victory.

“I think the biggest thing is our team spirit—we have character, we want to win and we’ve become a team, and that’s half the battle,” Head Coach Steve Stone said.

The England native is on his 10th year serving as head coach for the squad. Stone added that the team is working toward two goals for a successful season.

“First off recruitment; if anyone is out there that wants to play rugby, we can still teach them between now and the next game, in two weeks’ time. Second, we must keep learning and developing as a club,” Stone said.

Rodriguez and Stone both attributed the win to dedication in practice, hard work and team spirit.

“We’re all about having fun, but when it comes down to it, the boys come to work every time and it shows in our play,” Rodriguez said.

With the first game of the season under their belt, the Knights look to have a promising future with a talented youthful core and veteran leadership.

“We have the same goal every year, and this is to make it to national playoffs,” Stone said.

The next game will be Feb. 17 at 1 p.m. against California State University, Fullerton at Cal Lutheran’s North Field.