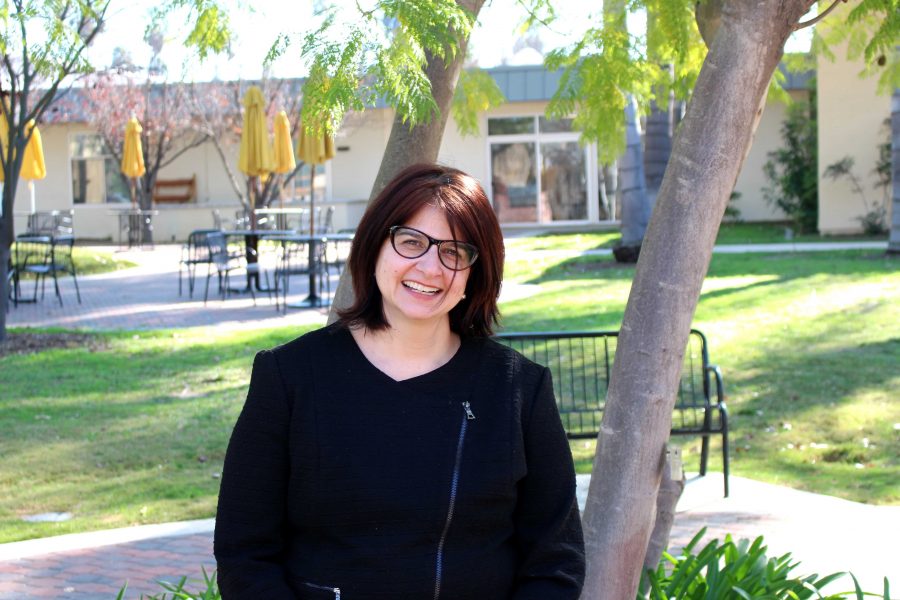 “She didn’t miss a beat”: Despite a difficult transition from dealing with Hurricane Florence at the University of North Carolina to Thousand Oaks in the midst of the Woolsey fire, Sanchez said her main concern was about the community. Photo by Spencer Hardie- Photojournalist.

When Provost Leanne Neilson met Christina Sanchez, who had just been hired for the new position of associate provost for global engagement, she prepared a list of people for Sanchez to meet in the California Lutheran University community. But it turned out Sanchez had already introduced herself to them all.

Since November 2018, Sanchez has overseen the new Center for Global Engagement, which combines the offices for Study Abroad, International Student Services and International Admission.

Sanchez describes her position as one that was designed to promote “goals for global learning and engagement for all students.”

However, Sanchez’s transition from associate director of the Office of International Programs at the University of North Carolina at Charlotte to Cal Lutheran was not an ordinary one.

“[Sanchez] had been dealing with issues in Charlotte, where there were all these evacuations because of the floods and she was dealing with all the international students … who were having to be evacuated. And then a month later, she’s moving here and we’re right in the middle of the fires,” Neilson said.

Sanchez said her previous institution was one of the shelter sites after Hurricane Florence. When she arrived in Thousand Oaks to assume her new position, she found out that the apartment she was moving into had been evacuated because of the Woolsey fire. After three days in a hotel, she was able to return to her apartment.

Despite all of this, Sanchez said her concern was more about the Thousand Oaks community.

“She didn’t miss a beat; she rolled up her sleeves and got started,” Neilson said.

Sanchez, who comes from a military family, taught English in Japan for a year after completing her undergraduate degree.

She has served as the director of International Student and Scholar Services at the University of San Francisco and the assistant director of international programs at James Madison University in Virginia. She has also worked with Semester at Sea, Lessons from Abroad and the International Honor Society for Scholars.

Rowley said he was on the search team looking for candidates for the new associate provost position after the three international offices were combined to work as “one cohesive unit.”

After a national search for the right person, Rowley said he is confident that Sanchez is an asset to the university.

“CLU is at a pivotal time in terms of international education, where we need to take the next step,” Rowley said.

Neilson said hiring Sanchez was part of a strategic move. Cal Lutheran currently has an F1 student visa, which allows international students to come to the university. However, the goal is to establish an international faculty exchange program.

“What we are really interested in is for faculty to come to Cal Lutheran and to be sponsored by us as a scholar… that might be teaching based, it might be research based, it might be a combination of the two, in order to further enrich and enhance our campus community,” Sanchez said.

A J-1 visa is necessary to establish this program. Neilson said it requires federal approval, and for somebody on the staff to have at least three years of experience working with J-1 visas. Sanchez brings that experience.

“Hopefully by 2021…we are fully functional,” Sanchez said, noting that the government paperwork takes time.

In the meantime, her short-term goals are making sure that the office is up and running to increase exposure and outreach. Long-term goals include physical expansion.

“It would be fabulous to have an expanded, stand-alone, independent center with academic programs, with classrooms, with residents for visiting scholars,” Sanchez said.

The new center, located in the upstairs level of the Student Union, is having an open house on Feb. 11 at 9 a.m.

“I have always been passionate about higher education and the university environment, so this has been home for me,” Sanchez said.