Spotting the Birds of Cal Lutheran 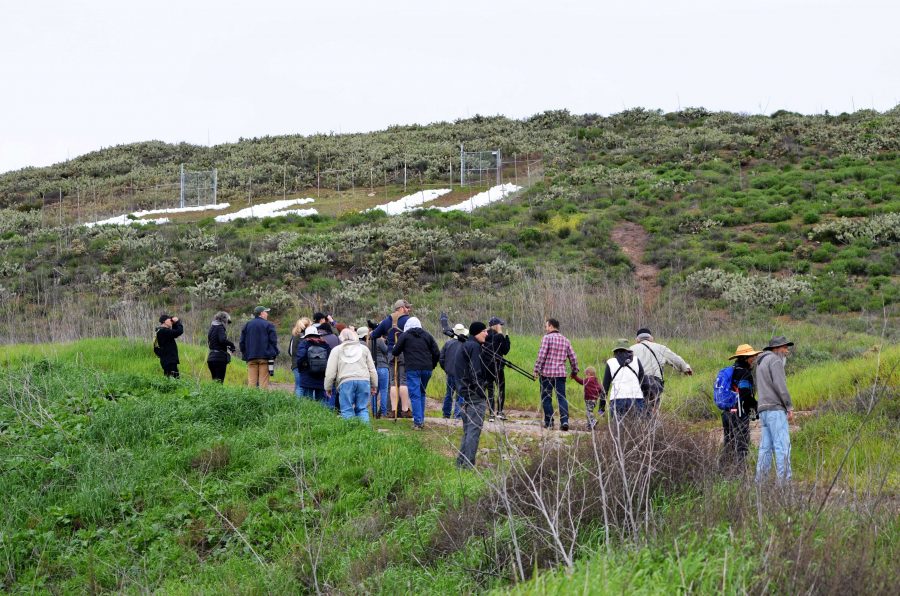 "Birders" gather on Mount Clef behind the Cal Lutheran campus to look for local birds including the endangered California gnatcatcher. Photo courtesy of Cia DeMartino.

Everyone knows California Lutheran University as home of the Kingsmen and Regals, but few realize the campus, which borders Conejo Open Space, is also home to dozens of bird species.

On Sunday, Feb. 17, “birders” gathered near the ‘CLU’ sign on campus as part of the Conejo Valley Audubon Society’s “Birdwalk” event series, in hopes of spotting some of these feathered friends.

“Every week, we do a walk at different locations. I wanted to do the one today because I’m familiar with the campus, but that doesn’t mean we’re explorers or anything, because anyone’s welcome to join,” said Cynthia “Cia” DeMartino, director of the Center for Teaching and Learning at Cal Lutheran.

“I think birdwatching or ‘birding’ is a great hobby because we want more young people to become birders since we usually attract older folks around here for our events. We want to get more people out there because you get to connect with nature,” DeMartino said.

DeMartino said she saw around 30 bird species on the hour and a half long walk. DeMartino added that this was a typical amount of birds to observe on a bird walk.

Angela Bonfiglio Allen, field trip coordinator of the Conejo Valley Audubon Society, said she became interested in birdwatching when she was younger because she was always fascinated by how loud the birds were chirping when she heard them.

“Going through life, I didn’t really know what they were, but one day a friend invited me to go birdwatching with her, so I decided to go and see what kind of birds they are,” Bonfiglio Allen said.

Bonfiglio Allen said that if it had rained, the event would’ve been cancelled to prioritize the personal safety of the birdwatchers, and because the birds would have been keeping warm in their nests.

Rosemary Rowe, one of the birdwatchers at the event, said she is a bird enthusiast, but not an expert like most birdwatchers.

“I love to watch birds and I have a list of a whole bunch of them. I’m hoping to see the locals like the raptors and hawks, but there might be surprises. The raptors are my favorite,” Rowe said.

Rowe said she loves going to these birdwatching events because of how casual they are, despite having to wake up early in the morning to attend the event.

According to the Conejo Valley Audubon Society website, the next birding event will take place on Saturday, Feb. 23 at Arroyo Simi in Simi Valley off of Madera Road.