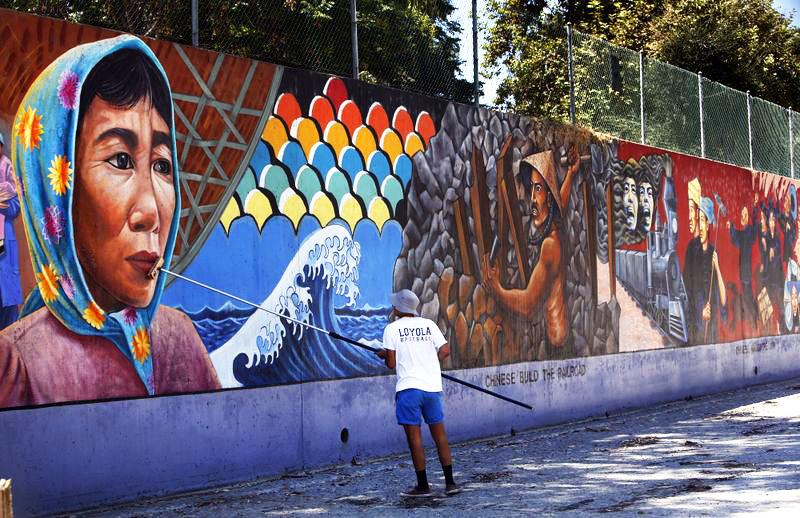 More than words: (Above) Baca’s work aims to highlight political and social injustices that take place in American history during different decades. (Below) A representative from the Social and Public Art Research Center, or SPARC, cleans Baca’s “The Great Wall of Los Angeles” in 2014. Photo courtesy of Mel Melcon/Los Angeles Times.

“Over the years I have been called many things. People called me a street artist, a Chicana artist, an urban artist, a minorities artist, a majority artist. But…I have begun to think of myself as a political landscape painter. I started over the years to begin to describe my work as a tool for transformation of personal and political views,” said Judy F. Baca, an artist, activist and professor of Chicana/o studies at University of California, Los Angeles.

While Baca teaches at UCLA and has received awards for her art and activism such as the Guggenheim Fellowship for Creative Arts, Baca is most well-known for the first mural that landmarked her career as an artist, “The Great Wall of Los Angeles.”

The program is now known as the Social and Public Art Resource Center located in Venice, California, where Baca continues to be the executive director.

The mural project began with 80 youths that were referred by the Criminal Justice Department, some with little to no experience in art or the social history that was being painted in the walls of the Tujunga Wash drainage canal in San Fernando Valley.

Over time, the number of participants expanded to an employment of 400 including youth, historians and artists. Baca said her goal was to have the mural display world history from the perspective of minorities. Baca emphasized the importance of diversity and acceptance of social location and said she wanted to “feature the history textbooks have never told.”

“I’ve been learning to listen to the land to hear the stories hidden there. It is this concept that the land has memory and that learning to put my ear to the ground to listen and to understand the spirit of place that has been the basis of my public art painting for the last 40 years,” Baca said. “It sometimes tends to have political implications, as the land is the very sign of contentious struggles and often becomes defined by territories and borders…it is a reminder that history does not begin when you arrive.”

Carlos Castellanos, a visiting lecturer of English at Cal Lutheran, said he played a large role in planning Baca’s visit to campus. Not only was it important for Castellanos to have the social activist and artist educate students about minorities’ role in history, he said, but Baca’s murals impacted his own life after discovering them while attending his alma mater, UCLA.

“Baca’s work is timely now more than ever. I think it was important for her to be here because of the campus’ Hispanic Serving Institution [HIS] initiative, which I thought would be a nice way to…talk about the importance of understanding the communities we are serving and acknowledging their narrative of where they come from so we could better serve them in the future,” Castellanos said.

Baca is in the process of adding events from the 1960s and 1970s to the mural. Additionally, a green bridge that will allow the public to have a closer view of the one-and-a-half-mile long mural will be constructed out of debris from the Los Angeles River.