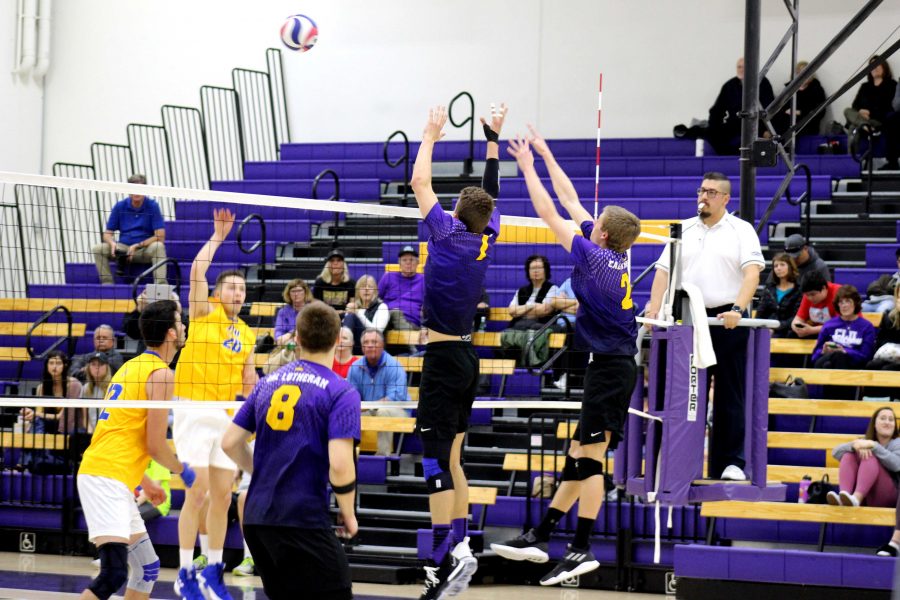 Senior opposite Brendan Ward and junior outside hitter Mason Mercer defend over the net against the Johnson & Wales University Bulldogs. After four wins in the Cal-Lu-Fornia Classic tournament, the Kingsmen are 9-7 on the season. (Photo by Spencer Hardie - Photojournalist)

Kingsmen volleyball added a fourth straight shutout to their winning streak with a victory against Johnson & Wales University Saturday, March 9. The match was the Kingsmen’s fourth in this year’s Cal-Lu-Fornia Classic and the first of  two games on Saturday.

The Kingsmen dominated the game statistically, standing out in the categories of total kills and assists. They had a total of 41 kills in three sets, almost double their opponents’ 21.

Johnson & Wales had less than half of the assists that the Kingsmen were able to tally up. Cal Lutheran finished with a total of 37 assists, 21 of those coming from junior setter Grant Nelson. Junior libero Alec Bennett also made it into double-digit assists this morning with a total of 10.

Rowe was just one dig shy of a double-double. After the three sets, he ended up with a total of 15 kills, 9 assists and 2 blocks.

“I felt good, you know. I really thrive like with how my teammates are doing. When they’re playing well, it makes me even better,” Rowe said.

Reina reached double digits with a total of 10 kills while also managing to earn a single assist and 4 digs.

Prior to the Cal-Lu-Fornia Classic, the Kingsmen were on a seven-game losing streak. After the game, both Rowe and Bennett said although the team did not have the start they wanted this season, the team really came together in January and February to get better.

This is the team’s fourth straight match they have taken in the first three sets, and has improved their record to 8 wins and 7 losses.

Junior middle blocker Justin Dietrich said he was very pleased with his team’s ability to perform in this tournament after a rough start to the season.

“We came into this tournament with a better mindset and have been playing really well together,” Dietrich said.

The Kingsmen then ended their day with a match against the Raiders of Rivier University, who held an impressive record of 12-6, to close out the Cal-Lu-Fornia Classic.

Cal Lutheran took their ninth win of the season by winning the match in four sets, 3-1. The Kingsmen totaled 41 kills, 37 assists and 30 digs to close out the tournament. This keeps their winning streak alive at five and their overall record at 9-7.

The men’s volleyball team went undefeated in the  annual tournament, setting them up above .563 overall with eight games left in the season.

The Kingsmen will then face Endicott College in Gilbert Sports Arena on March 19, before they head to Massachusetts for five games on the road the week of spring break.