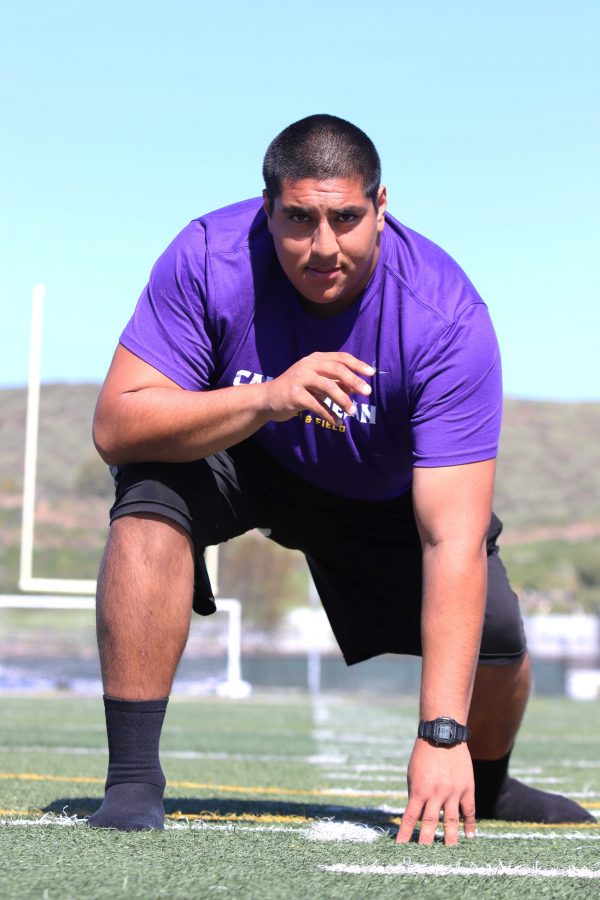 Junior football offensive lineman and track and field thrower Danny Avila started sumo wrestling in 2016 after watching sumo videos on YouTube. He said he was hooked after the first time he tried it. He has since won the bronze medal at the U.S. National Championships in St. Joseph, Missouri and is the third-ranked heavyweight in the nation. (Photo by Arianna Macaluso - Photo Editor)

It is not easy to move him. Just ask sophomore defensive end Caleb Casimere, who lines up against him at football practice everyday.

Ask Avila’s head coach and he will say it is just as big to have the second-team All-Southern California Intercollegiate Athletic Conference pick returning to the offensive line next season.

“Danny [Avila] is a special guy. I love having him on the team,” said Kingsmen football Head Coach Ben McEnroe. “In typical o-line fashion, he just goes out and does his job at an All-Conference level and is pretty low maintenance. I really appreciate him and all that he brings to the university.”

Just four years ago, Avila did not plan on playing collegiate football. In his senior year of high school, he said, he had his sights set on enlisting in the military.

“Entering my senior year of high school, I was really dead set on going to the Navy,” said Avila, who earned first-team All-League honors twice and All-City once as an offensive lineman at Wilson High School in East Los Angeles. “But that was until one of my football coaches talked me out of it.”

Avila’s interest in Cal Lutheran spiked when the head coach of his high school football team told him about the on-field success his sons had as members of the Kingsmen football program.

“They talked to me about Cal Lu and the DIII route. So then I reached out to Coach [Anthony] Lugo because I knew he was an East L.A. cat, and he got me out here,” Avila said.

The junior has played three seasons of Kingsmen football. In his sophomore year, he played in all eight games of the season. In the 2018 season, he helped lead the Kingsmen to the second best offense in SCIAC that year at 3,804 yards.

Nikora now doubles as an assistant coach of the throwers for the Cal Lutheran track and field program. He is the one who convinced Avila to get back into throwing shot put for the first time since high school.

“I’ve never thrown in college before, so I don’t really have any super aspirations,” Avila said. “There’s a lot of guys out there that are way better than I am. So as long as I’m better than myself week by week, I’ll be happy.”

Avila is currently lifting with Coach Nikora and the throwers, but has been showing support at the football team’s early morning weight sessions as a way to remain a leader.

“I’ve been showing up to the morning lifting sessions just to be around the team, just because I didn’t want to be a no-show for a whole half-year,” Avila said. “So I’m just making my face present around the team to let them know I’m not leaving them for something else.”

McEnroe acknowledged that Avila’s presence alone serves as much-needed leadership for guys on the football team.

“[Avila] brings a strong work ethic and he pushes himself and others to be their best,” McEnroe said. “He’s not a huge ‘rah-rah’ guy. He just stays cool and has a great way of elevating everyone around him.”

Avila has embraced the challenge of getting back into throwing shot put while continuing his football career. But going into college, the junior dual-sport athlete picked up a third sport: sumo wrestling.

Avila is a member of the United States Sumo Federation, a group of American wrestlers who pay to compete year-round in sumo tournaments across the country and internationally.

“Sumo is real eye-opening,” Avila said. “It’s kind of like football in a lot of ways just because we train day in and day out. Also, it’s the same level of camaraderie. The only difference is it’s all about you beating your opponent.”

Three weeks ago, Avila took the bronze medal at the U.S. National Championships in St. Joseph, Missouri, which also served as the North American world qualifier. His performance bumped him up to the third-ranked heavyweight in the nation, with another opportunity to improve his ranking at the U.S. Sumo Open March 23.

Avila said football used to rank at the top of his list of passions, but that list has since changed as he has continued to improve in the two-and-a-half years since he picked up sumo.

“For a long time, football was the love of my life. But if I were to go in order now, it’s one, sumo; two, football; three, track,” Avila said.

Avila’s newfound dominance as a sumo wrestler has not lessened his commitment to football. In fact, he believes sumo has helped him improve as a football player mentally and physically.

“I used to get in my head a lot before a game, kind of freak out, and it would affect my play,” Avila said. “But sumo has really grounded me, and I feel like last year I was able to translate those mental blocks and clean them up this year.”

Avila said he dreams of visiting Japan, the birthplace of sumo over 2,000 years ago. But you have to apply to a sumo stable in order to compete professionally in Japan. In addition, sumo tradition doesn’t allow wrestlers to compete with tattoos, and Avila has multiple on his body, including a wooden Aztec weapon called a “macuahuitl” on his right arm to honor his Mexican heritage.

“Unfortunately, I can’t compete in Japan…but I’d love to go to Japan and watch a tournament,” Avila said.

Avila’s teammate and roommate junior tight end Garrett Long admires Avila for his ability to juggle all of his passions.

“I find it incredible when people are able to balance their loads, and Danny is the epitome of that,” Long said. “He’s found a way to balance everything while keeping his happiness and well-being at a prime level.”

For Avila, a criminal justice major, life after sports involves fulfilling a lifelong dream of becoming a police officer. Once he gets his degree, he plans to wait two years and “gain some life experience” before entering the police academy.

“First, I’ve got to lose a bunch of weight since I’m a big ol’ lineman,” Avila laughed. “I love the lifestyle, just having to do something all the time and being forced to think on your feet. It’s just something that attracts me because I could not sit at a desk.”