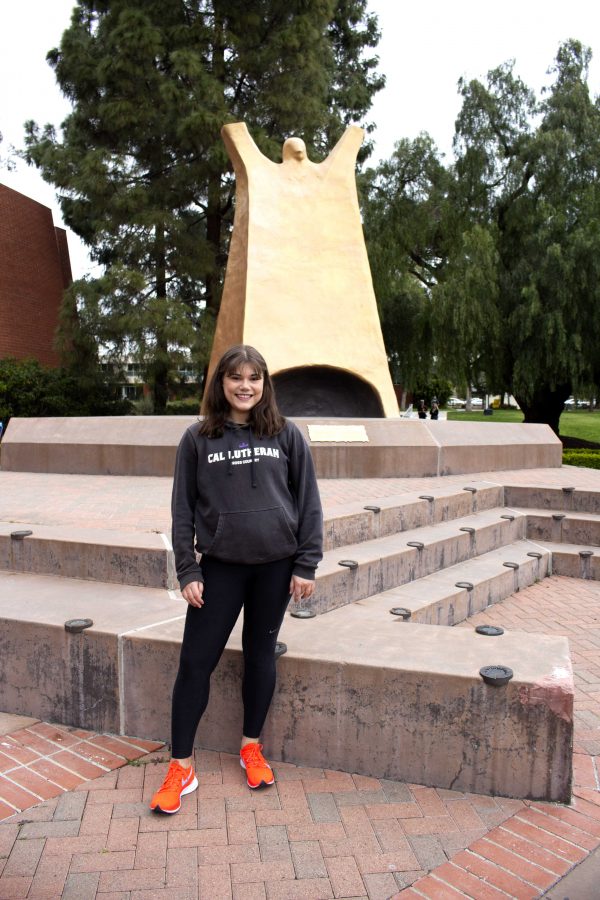 Connecting the country: In June, Cal Lutheran senior Stephanie Allen will depart from the Golden Gate Bridge on a 4,000 mile run to Boston. Participating in the run requires raising $5,000 for the Ulman Foundation, which helps young adults battling cancer. “I’m really looking forward to being a part of a team where we’re all running for something bigger than ourselves,” Allen said. Photo by Jessica Colby- Photojournalist

After a late night encounter with a Facebook advertisement promoting a 4,000-mile run across America, California Lutheran University senior Stephanie Allen signed up the very next day.

The run benefits the Ulman Foundation, a charity dedicated to providing services and support for young adults facing cancer.Services consist of housing for patients and their families along with scholarships and programs to help manage cancer and reintroduce patients to physical activity.

“I’m really looking forward to the experience of being a part of a team where we’re all running for something bigger than ourselves,” Allen said. “You know, it’s not about our times; it’s about where we can go to do what we can for somebody else.”

Before seeing the advertisement, the math major said she had never heard of the foundation. After researching further into the program, she was convinced it was something she had to do.

Allen said she “couldn’t imagine” what it would be like if she were diagnosed with cancer, especially for her mother, and so she immediately wanted to support the foundation.

Allen is no newcomer to distance running. She ran for Regals cross-country in the 2017 and 2018 seasons and track in 2018.

On June 16, Allen will begin her run from the Golden Gate Bridge in San Francisco. Over the course of 49 days, she will be part of a team running across the country, arriving in Boston on Aug. 3.

In addition to running, Allen also has to raise approximately $5,000 for the foundation.

Allen said she planned to sell team T-shirts, but donations can also be made on the Ulman Foundation website.

Some landmarks Allen will be running by are Lake Tahoe, U.S. Route 60, Yellowstone National Park, Mount Rushmore and Niagara Falls.

“What a great way to see all those places,” Allen said.

Rebecca Eddy, program coordinator and former participant of the run, said there will be two teams of runners with approximately 30 participants in each. There are also  two bike teams with 30 members. However, each respective team will have different destinations, such as Baltimore or San Francisco.

Eddy said the distance each day will vary between six to 16 miles, but on the last day each individual will be running approximately 20 miles.

As far as sleeping arrangements, Eddy said runners will be hosted in locations such as churches, schools and community centers.

Eddy said she is in charge of ensuring the safety of runners like Allen. Prior to the run, participants will attend an orientation to cover policies and procedures, take a safety quiz and become first-aid certified. In addition, runners carry road identification, reflective bands, a safety vest and a phone.

In respect to the route taken by participants, Eddy said “safety is the number one priority.” She said she “triple checked” the route to ensure they are on roads with speed limits under 55 mph and have no more than two lanes.

Participants began training in January. They have been cross training and running to build up different muscles to help them meet the demands of the run.

“We hope that all our participants have an opportunity to connect with others,” Eddy said. “And to help connect the country.”

Allen’s mother, Sandie Allen, said it was hard to believe that events such as runs across the country actually happen, but nevertheless thought it was a “great opportunity” and a “great cause.”

“She’s giving back in her own way,” Sandie Allen said.

Sandie Allen said she would be supporting her daughter along the way and will be “keeping in touch” daily via phone.

“She is strong, committed and perseveres even through worst possible circumstance,” Sandie Allen said. “She knows how to jump over the hurdles faster than the norm.”

Sandie Allen explained that even as a young child, her daughter “knew what she wanted and was not a quitter.”

In addition to being passionate about running and math, Allen has acted in shows including “General Hospital” and “Criminal Minds” according to the Thousand Oaks Acorn.

In the future, Allen said she would love to be an ultra marathon runner, with runs ranging from 50 to 100 miles, which is longer than the usual marathon of about 26 miles.