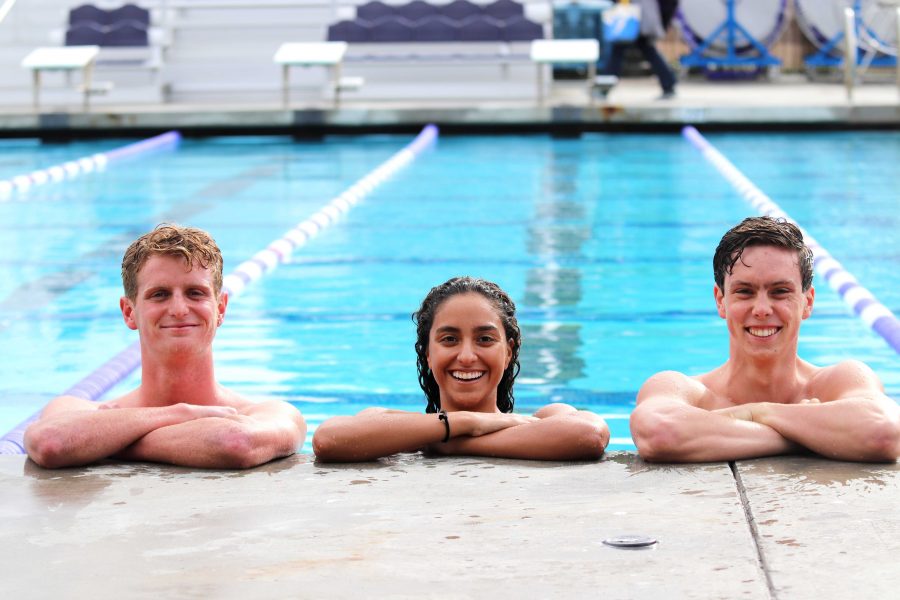 California Lutheran University swimming and diving Head Coach Barry Schreifels has been coaching collegiate swimming for 24 years. He knows greatness when he sees it, and he knows that it exists within three Cal Lutheran swimmers in particular.

“I’ve coached a long time. I’ve worked with dozens of swimmers who have made nationals and every single one of them is special,” Schreifels said.

Sanchez, who will compete in the 50 and 100 freestyle races for the second consecutive year at nationals, said that finishing her swim career at the sport’s biggest stage will be a blessing.

“‘Blessed’ would be the only word I can think of,” Sanchez said, who finished tenth and fifteenth in the 50 and 100 freestyle races last year, respectively. “It is not easy to come back from study abroad, take six months off, have six weeks to train to the best of my ability and then have the opportunity to go back to nationals.”

Nybo, who earned NCAA Division-III All-American honors last year as a first-year, will swim in three events: both the 100 and 200 fly and the 200 individual medley. He dominated those events at the Southern California Intercollegiate Athletic Conference Championship weekend, taking first place in the 200 IM with a meet record of 1:49.43, first place in the 200 fly at 1:47.85 and third place in the 100 fly at 49.15.

“It feels like validation for all of the hard work I have put into swimming and anything that I have given up to make practice,” said Nybo, who was named the 2019 men’s swimming athlete of the year by the SCIAC in February.

For the second consecutive year, Brewer will compete in both the 500 and 1650 freestyle races and the 400 IM at nationals. The junior admitted that last year he felt pressure to perform, but that his mindset changed for this year’s events.

“I’m super happy to have made the meet and am more than anything excited to travel with friends to a new part of the country,” said Brewer, who placed top three in all three events at the SCIAC Championships. “But I’m not feeling too much pressure this year. I’m going in ranked a little lower this year and am looking forward to racing with less expectations.”

Nybo has similarly embraced a more relaxed mindset inside the pool.

“I have definitely learned to enjoy the race a lot more,” Nybo said. “Last year it felt like every race was life or death, but this year I was really able to have fun swimming and enjoy the experience.”

Schreifels believes that success at nationals requires self-confidence, something he feels is characteristic of the three swimmers.

“I think the way to succeed at a national meet is to show up confident in the work you did all year,” Schreifels said. “AJ, Ben and Grace are swimmers who led the team by word and especially example. They put in the work. The strength of self-confidence is obvious with our CLU three.”

Schreifels acknowledged that it takes a different approach to coach swimmers who represent three different groups.

“Brewer is a distance swimmer, Nybo swims middle distance events and Sanchez participates in sprints,” Schreifels said. “So it is technically very different coaching each of them. But all three are intense, focused athletes.”

Brewer said he feels like he has grown a lot from the swimmer he was as a sophomore.

“Losing a head coach and a large senior class forced a lot of us older swimmers to take a lot more responsibility and I think we all grew a lot as people because of it,” Brewer said.

Schreifels, who is in his first year as head coach of the program, made it his goal to “help these swimmers set their goals early in the year then watch them work so hard to achieve them.”

Sanchez, who was unable to meet with Schreifels until the first day of training camp, credits Schreifels with changing her pre-season mindset and building a strong player-coach relationship.

“At the beginning of the swim process when I came back, I just wanted to have fun and enjoy my last year, and [Schreifels] told me, ‘You might want to switch that to thinking about when you make it to nationals,’ and I didn’t believe him,” Sanchez said. “He’s a great man, a great coach and I honestly believe that my team will be left in good hands for the years to come.”

Competing in nationals extends their season, which means the three swimmers will be missing classes. But Nybo, Brewer and Sanchez have done this before, and all three said they’ve planned accordingly.

“Luckily, I have not had to miss any class for swimming this year, but I will be missing a full week of class for NCAAs,” Nybo said.

Nybo said he has already made plans with his professors to take his midterms outside of class.

“I have always had to play the game of catch up and then play the game of ‘get-ahead,’ because you have something upcoming soon,” Sanchez said. “The whole purpose is to get ahead and not have to worry about it while you’re at nationals so you can focus on swims, the environment, having fun and taking in the moment on how hard you’ve worked for something that not many people get to say.”

Schreifels believes his swimmers will be prepared for the meet and advised them each to remember to “listen for the beep and go.”

“The three are special athletes and each has strengths that have made our CLU program so much stronger,” Schreifels said. “My words of advice generally is to let the atmosphere of the meet, the talent of all the great swimmers there and the emotion all to lift them and their efforts. At some point, it comes down racing, simply racing.”

Schreifels also believes that the team motto will serve each of them well.

“We have a saying that we live by on the team—‘Nobody swims alone’—and never will that be stronger than it will be for Ben, Grace and AJ at the NCAA Championships.”