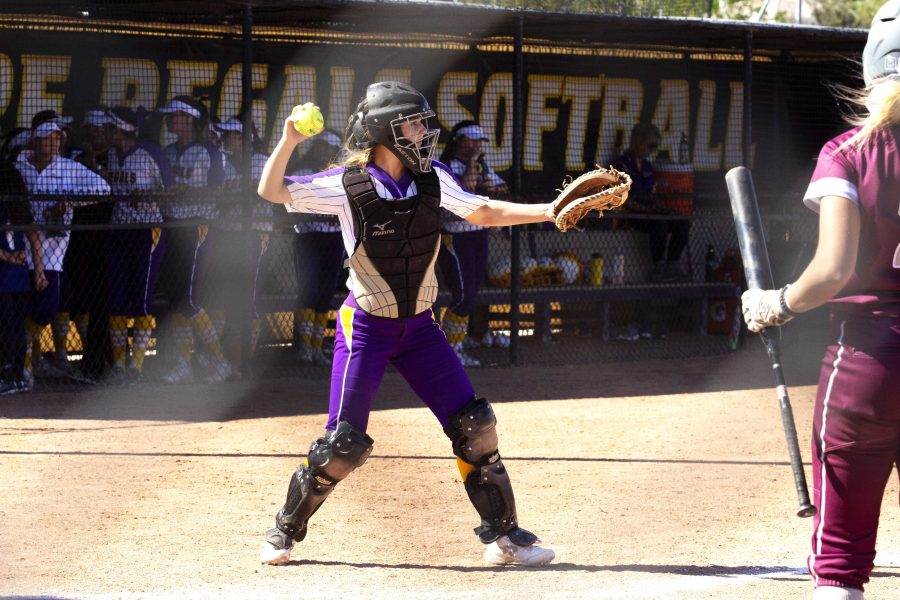 During the Regals' doubleheader against the Bulldogs, junior catcher Lexie Findley totaled one hit and one run, including a single off a bunt. (Photo by Gabby Flores - Photojournalist)

The California Lutheran University Regals hosted the University of Redlands Bulldogs in an important Southern California Intercollegiate Athletic Conference doubleheader on Saturday, March 16. The Regals were unable to bring home a win, losing the first game 11-3 and the second 4-1.

Cal Lutheran had a rough time with the at-bats as they were unable to generate any real offense all day.

In the first game, Redlands started the scoring with a run in the second inning and continued their momentum with three more runs in the third. The Regals looked to spark their offense in the bottom of the third inning with the bases loaded, but were only able to push one run across the board as Redlands pitcher Nicole Stanzione looked to be in a groove early.

Along with a stalled offense, the Regals had a tough day defensively with seven total errors accounted for, including six in the first game.

Regals junior third baseman Kendall Marinesi said the team came out too tense in the first game, but were able to relax and play better in the second.

“Today we had a pretty rough time defensively. Redlands was consistently taking advantage of us being flat-footed and I think that made us a little more tense and on edge,” Marinesi said.

The game seemed out of reach when in the top of the fourth the Bulldogs were able to score five more runs, making it a commanding 9-1 lead. The game ended in the sixth inning, with a final score of 11-3.

The second game looked to be a more promising match as the Regals bounced back and stepped up their competitive play.

Although they kept the Bulldogs offense under control, the Regals offense could not counter with runs of their own.

Serrano said she knows what it takes to be a collegiate starting pitcher, and mindset and preparation are important to her play.

“During my pregame warm-up, I visualize pitching to the other team and the catcher, and I talk about what we plan to throw to certain batters,” Serrano said. “I was able to stay focused because of my teammates. I focused on hitting my spots and being okay with the other team hitting the ball because I knew my teammates would make the plays.”

Just like the first game though, the Bulldogs answered whenever the Regals got runs across home plate. After taking a 1-0 lead by a double down the left field line by junior first baseman Catherine Slabaugh, Redlands responded with three runs of their own in the top of the third taking the lead 3-1.

The Bulldogs added 1 more run in the top of the fifth that proved to be all they needed as they secured the sweep with a final of 4-1 in the second game.

Cal Lutheran added one win and one loss in a non-conference doubleheader at home Sunday, March 17 against State University of New York College, Cortland. The final scores were 6-2, Cal Lutheran, and 6-1, Cortland.

The Regals now hold a record of 6-10 overall and 1-7 in conference. They will look to improve their record in another non-conference doubleheader Tuesday, March 19 against Williams College.