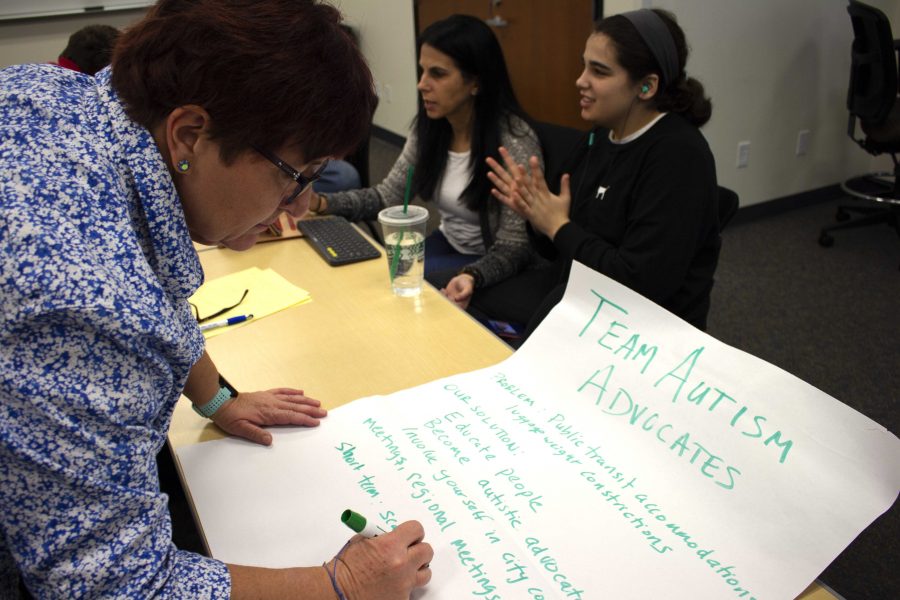 Autism, or autism spectrum disorder, is a developmental disorder that refers to a wide range of conditions characterized by difficulty in social interaction and communication and by restricted or repetitive patterns of thought and behavior, according to the website Autism Speaks.

The event was coordinated by Mel Spence, an assistant professor of education at Cal Lutheran. This was Spence’s second year hosting the event.

Panelists introduced themselves and briefly spoke on everyday challenges for the autistic community. After, attendees broke off into groups to come up with possible solutions to these issues.

The issues discussed at this year’s panel were transportation, hardships interviewing for jobs and difficulties with law enforcement who are not trained on how to interact with people on the spectrum.

“A lot of people who are on the autism spectrum, along with other people with disabilities, they do take Access Paratransit to get to their destination if they are not travel-trained, or have no means to take the bus independently,” Barnett said.

Access Paratransit is a service through the Los Angeles County Consolidated Transportation Services Agency that is a “federally mandated civil right” for those with disabilities who cannot ride public fixed-route buses and trains, according to the AccessLA website.

“In high school and middle school, my parents often had to fight tooth-and-nail to get the services I need in school and through regional center, and as I get older I realized that my parents and other adult support teams can’t always do the work for me,” Barnett said.

The panelists talked about the stigma surrounding those with disabilities, particularly those with autism. They said people simply do not know how to communicate or act around those who are on the spectrum.

Cal Lutheran graduate student Delaney Noel attended the event to continue her education on working with individuals who have ASD, as she has an interest in teaching students with disabilities one day.

“I can [go] into the future teaching people with special needs from a different viewpoint and a different standpoint just knowing what they go through on a daily basis,” Noel said.

Noel said she found the event to be incredibly eye-opening to struggles she was not aware of before, particularly the dangers those with disabilities face with law enforcement.

Spence said she hopes to make finding a solution reality with the help of colleagues from various departments.

The panelists said they are advocating for individuals on the spectrum in hopes of familiarizing people with and educating people on the topic of autism.

“As someone who is able to communicate, someone who is aware of their surroundings, I feel it is my obligation to speak up for myself and become my own advocate. Because as an adult, you have to fight your own battles,” Barnett said.