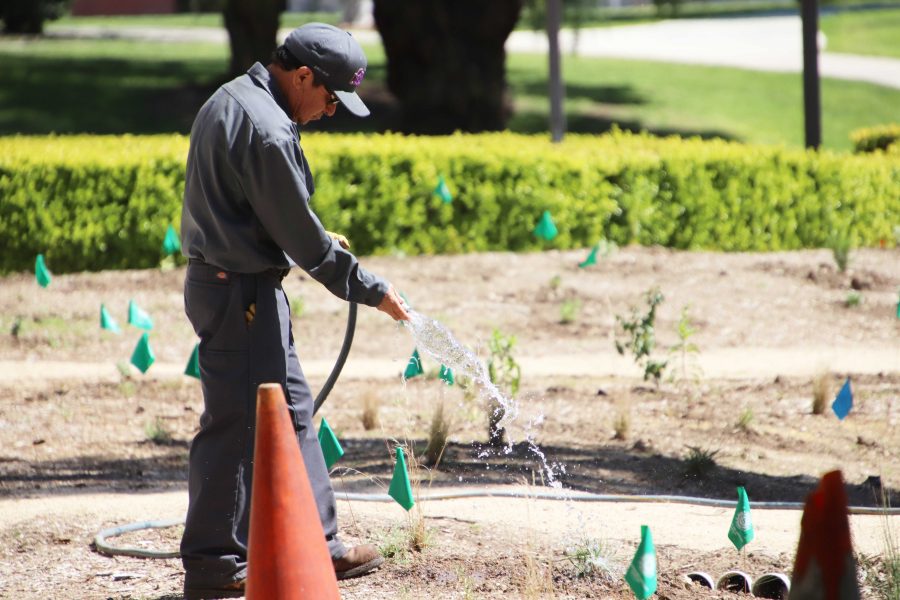 Spring has sprung: Groundskeeper Alberto Ramos waters the native plants near the Pearson Library individually to make sure each gets the proper amount of water. The garden project is still a work in progress. Photo by Arianna Macaluso - Photo Editor

As part of the Sustainable Edible Education (SEEd) project initiative, California Lutheran University is in the early stages of implementing a native plant ecosystem near the Pearson library. 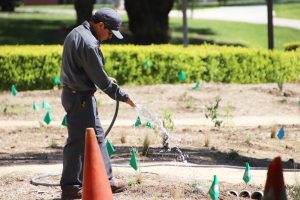 Spring has sprung: Groundskeeper Alberto Ramos waters the native plants near the Pearson Library individually to make sure each gets the proper amount of water. The garden project is still a work in progress.Photo by Arianna Macaluso – Photo Editor

Grounds Operations Supervisor Richard Wagner said the native plant garden will be home to nearly 91 different species of plants, with over 640 plants total. Director of Facilities Management Mark Jacobsen said the native plants are coming from a variety of local businesses such as Agromin, Matilija Native Plant Nursery and The Theodore Payne Foundation.

“We really wanted to have a place that was central and that people walk by all the time and that would be inviting, but we also wanted a site on campus that could use a little beautification,” said Samuel Thomas, a religion professor and associate dean of students and faculty affairs.

The idea for the garden was a collaborative effort by Thomas and Associate Professor of Religion Lisa Dahill. Thomas said he used to talk with Dahill about their “obsession” with native plants and the ways native plants can “attune” people to the ecological context in which humans live.

Dahill said the native plant garden will be used to educate people about native planting, biodiversity and connection to Native Americans such as the Chumash tribes, who inhabited what is now Ventura, Los Angeles, Santa Barbara and surrounding areas.  Native plants have been planted in the garden and groundskeepers are in the process of laying mulch on top of the dirt.

“I wanted to have more and more places on campus that connect us to that broad ecosystem and then that can be used as learning tools to deepen those connections,” Thomas said.

Dahill said a portion of the native plant garden will eventually be used as an outdoor classroom and possibly a sculpture exhibition space.

“I would want it to be a place that would inspire people to really grasp how beautiful native chaparral and native California plants are,” Dahill said.

In order to renovate the area near the library, Thomas and Dahill needed to write a grant proposal through the City of Thousand Oaks Community Enhancement program. The program requires that each beautification project have some environmental benefit like litter removal, tree planting, recycling programs, food composting or water conservation.

According to the grant proposal, the project was designed to extend the ecological footprint of the SEEd Garden. The garden’s mission is to demonstrate sustainability and teaching resources for faculty, students and members of the Thousand Oaks community.

Thomas said the application for the grant was submitted in October 2017 and was later awarded to Cal Lutheran in January 2018. However, the process of planning and working with the landscape designer was not completed until June 2018.

The preparation of the site, Thomas said, was pushed back until December 2018 because there was the risk that the plants would not make it through the heat of summer.

Dahill said the community enhancement grant was $5,000. However, as planning was underway, the original area that was dedicated to the project tripled in size, causing a shortage in funds. Dahill said the extra funding came from  the Cal Lutheran budget.

“The university sees the values of this and wants to invest in it because it’s a benefit to the school,” Dahill said.

According to the grant proposal, companies like Agromin will be providing donations and lending their expertise in soil preparation. The Matilija Native Plant Nursery and Theodore Payne Foundation will be donating native plants and provideing guidance about the planting process.

However, there are still features of the project that have yet to be completed. The implementation of signage to describe the variety of native plant species and the incorporation of a rainwater catching system to provide a sustainable source of water for the plants have not been started.

Jacobsen said because of some issues related to the layout of the garden, the rainwater catchment system will be on hold until further notice.