Co-Directors of Scandinavian Center: Celebrating Their Heritage for 60 Years 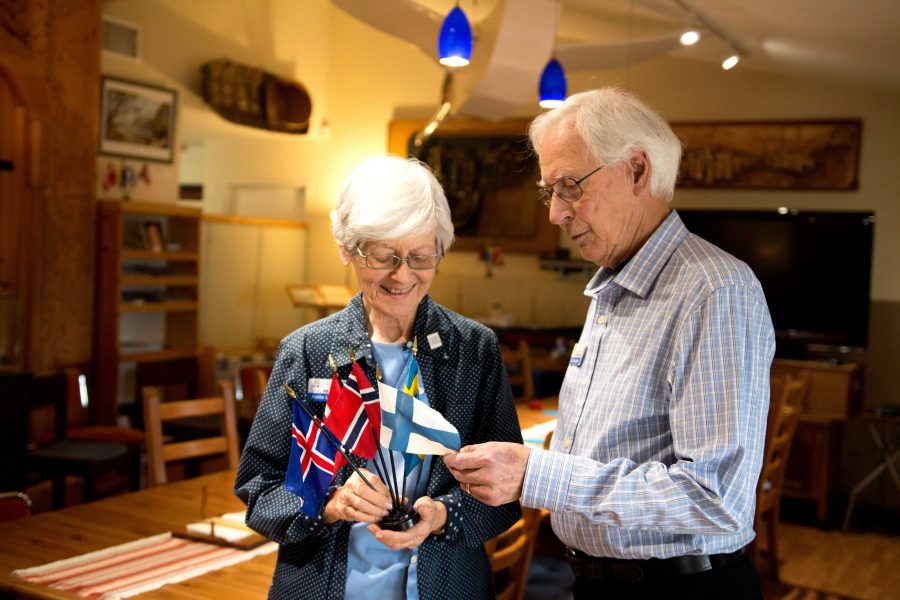 A couple of Scandinavians: Richard and Anita Londgren are co-directors of the Scandinavian Cultural Center on Cal Lutheran’s campus. While some may doubt that couples can work together, Anita said it depends on the personalities and how much you work at it. Photo by Katie May- Photojournalist.

For the past 16 years, Richard and Anita Londgren have worked side-by-side at the Scandinavian Cultural Center on California Lutheran University’s campus. The couple is passionate about their heritage, and strive to educate others through the center.

“We complement each other,” Anita Londgren said.

Anita and her husband Richard Londgren are currently co-directors of the center, which is home to the Scandinavian American Cultural and Historical Foundation. The foundation is responsible for the annual Scandinavian Festival, which was hosted for the 44th time in Kingsmen Park on April 6-7.

They attribute their successful working partnership to common interests. They both have a strong Lutheran background, and a passion for writing and editing.

Anita described Richard as a “prolific writer.” She proofreads his books, which are available on Amazon, and he creates the graphics. One of the many topics he has written about is Scandinavian architecture.

Richard, who is from Minnesota, and Anita, who was born and raised in San Francisco, met at Pacific Lutheran University in Parkland, Washington. They were in a morning religion class together.

“I flirted with her…I tried to start up a conversation,” Richard said.

After attempts to get her attention, he asked her to go to a basketball game in Seattle. Anita agreed, and that is where it all began. They frequently went to a coffee shop and did homework together during the rest of their time in college.

This year, they are celebrating their 60th wedding anniversary.

After getting married, Richard worked at the University of Washington, as well as for the Oregon Journal. Anita started an education program in a county jail.

Despite their careers, the Londgrens never forgot their heritage.

Richard is of Swedish heritage, and Anita is three-quarters Norwegian and one-quarter Swedish.

After living in Tacoma, Washington for 40 years and raising three children, Richard and Anita moved to Thousand Oaks and became involved with the Scandinavian American Cultural and Historical Foundation.

Richard, who has a business and marketing background, started out as the director. But as he spent more time writing his books, Anita stepped in.

Anita, who has a social services background, has been on the foundation board for 16 years and president for three years. Richard joined the board a few years ago.

The Scandinavian Cultural Center is not officially part of Cal Lutheran. It is a separate nonprofit organization that works with the university.

“We like Cal Lutheran and we have been connected with Lutheran activities for a long time,” Richard said.

Madeline Barnes, president of the Scandinavian club on campus, said Anita is kind and welcoming.

The 20-member board gathered local Scandinavian groups in the community to help out. They even hired an event planner to assist with the event.

“People come literally from all over the world to go to this,” Barnes said.

Even after the festival is over, Richard and Anita continue their work at the Scandinavian Center.

“There are a variety of activities that Scandinavians promote. Some of them are fun like the festival, and some of them are more serious like learning about explorers and artists and musicians,” Anita said.

Richard and Anita also take care of all the art and antiques in the Scandinavian Cultural Center. The center has classes and meetings frequently.

“We admire what Cal Lutheran does,” Anita said. “This is a way for us to help other people get connected to Cal Lutheran.”