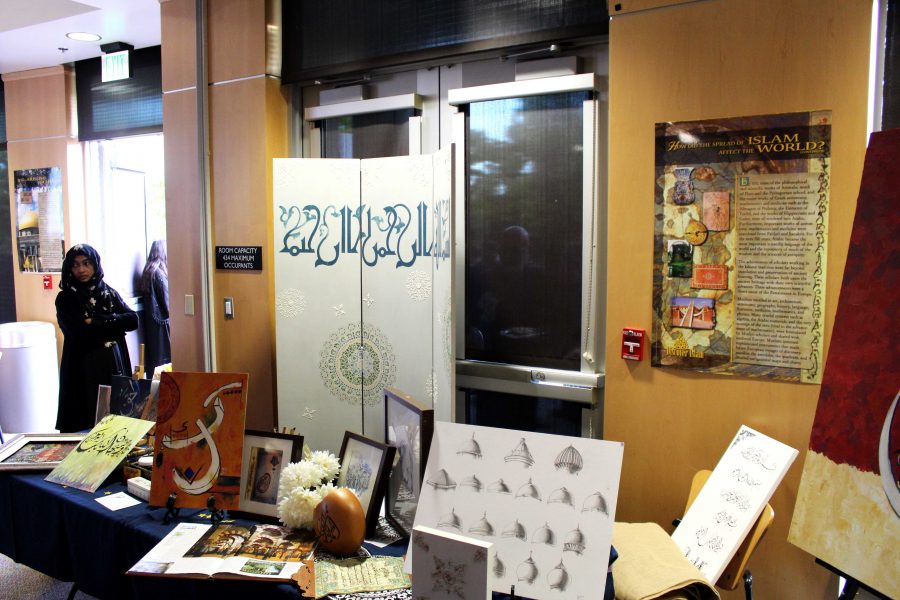 A display on Muslim artifacts at the April 23 Muslim Culture Banquet. Photo by Spencer Hardie- Photojournalist.

The second annual Muslim Culture Banquet drew hundreds of students, faculty and members of the public to California Lutheran University’s Lundring Events Center for an evening of cultural lectures, free food and displays on various aspects of Muslim culture.

Junior Sana Shah collaborated with Moorpark College’s Muslim Students Alliance to host this year’s banquet April 23 for anyone interested in learning more about Muslim culture. Shah is the president of Cal Lutheran’s MSA and coordinated the first banquet last year.

“[The first banquet] was to just raise awareness for Islamic Awareness Week. So basically, it can get people accustomed to the Muslim culture and that it’s not a far-off thing, since there are more similarities than differences,” Shah said.

Shah said she expected about 50 people to show up to last year’s banquet, but more than 200 people came. Shah said she took a rough estimate of how many people showed up to this year’s banquet and believed there were 225-230 guests.

“I didn’t collaborate with Moorpark College last year because it was our first one, and I just wanted to see how it would go if I went about it myself. With their help, it just got better than last year’s because we were able to have more food, speakers and stuff like that,” Shah said.

Shah said she plans to continue hosting the banquets for as long as she’s in charge. She said she hopes attendance will continue to grow, because she starts planning during the fall semester and has many ideas she hopes will come to fruition.

Shah said she believes reaching out to other MSAs, such as the MSA at University of California, Los Angeles, will help build community and spread the word about interfaith. Shah said she also enjoys collaborating with high school MSAs as well.

“Three years ago, there was no MSA here, and being part of a Lutheran university that does accept diversity and interfaith, they should be proud to host Muslim students at their school…I have all the help from Campus Ministries, and me knowing that they’re supporting us gives me all the confidence I need to host more events like this to bring people together,” Shah said.

The halal meal was catered by New York Chicken & Gyro. Shah said the halal diet is similar to kosher because, like Jewish people, Muslims have dietary restrictions against pork and alcohol. Shah said one of the requirements of a halal dinner is ensuring that an animal is treated well before being killed in a painless, healthy and clean way.

Shah said she is happy she chose Middle Eastern food because it makes people go out of their comfort zone and try new things.

Junior Kerstin Westerlund heard about the banquet from Shah when they were both in the Center for Global Engagement and through flyers. Westerlund said she wasn’t able to go to last year’s banquet as she was studying abroad but was impressed by this year’s banquet.

“The food looks amazing… I think food is important to learn about a person’s culture,” Westerlund said.

Westerlund said she is going to Morocco this summer and the banquet aligned with her interests to learn more about Muslim culture and the Arabic language.

Sophomore Abigail Espinoza-Alfaro heard about the banquet on the HUB. She said she appreciated having food served after the lectures so people could pay attention to what speakers had to say. Espinoza-Alfaro said she’s Catholic, but was surprised to learn she shared many similarities with the Muslim students who hosted the banquet.

“I would go to next year’s banquet because it’s important to learn more about the Muslim culture given today’s society, because of misinterpretation of information that is not well known to people who make assumptions,” Espinoza-Alfaro said.