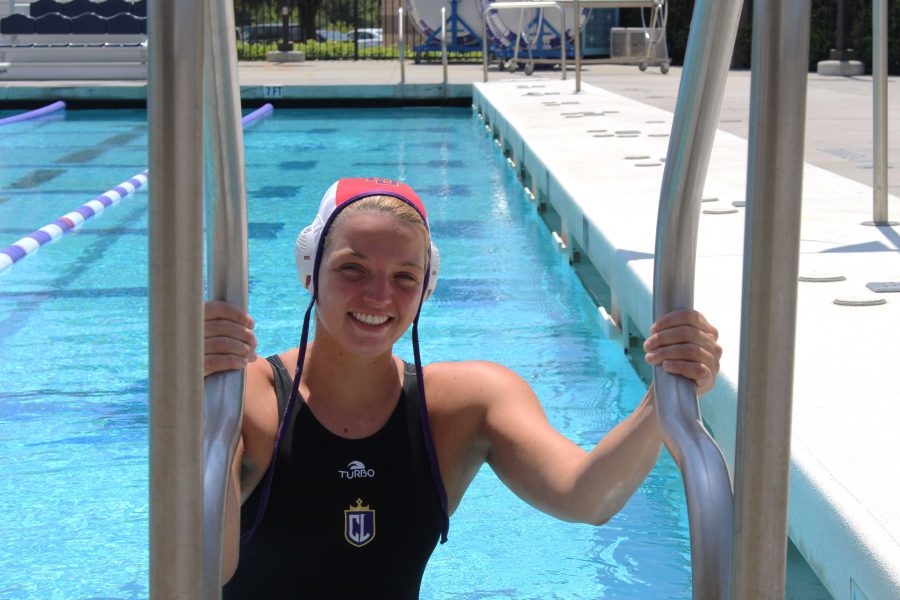 Senior goalkeeper Bailey Meyer was named Second Team All-SCIAC her sophomore year and First Team All-SCIAC her junior and senior years. The chemistry major and German minor has also been named SCIAC Athlete of the Week three times, making her the only water polo player to win the award more than once. (Photo by Spencer Hardie - Photojournalist)

But the 6’2” goalkeeper’s season is not over yet—the Regals water polo team’s impressive 21-8 record earned them a spot in the the National Collegiate Water Polo Championship tournament. The Regals will face the Pacific Tigers in the opening game on Tuesday, May 7 at 1:45 p.m.

This year marks the Regals’ second SCIAC Championship in program history, and first since 2009 when they went undefeated in conference play.

“It was and is absolutely wonderful. We worked so hard in both season and off-season, and these girls put everything they had into the team, and to see it all pay off is the greatest feeling in the world… and it’s not over yet,” junior attacker Christin Hirn said.

Head Coach Craig Rond said in an email interview that Meyer earned First Team Honors by “simply being the best goalie in the conference.”

“She is a phenominal leader and a peer favorite,” Rond said.

After earning First Team Honors just days before the championship, Meyer said she went into the tournament confident and excited. But she was still surprised to break the school record with 912 saves in her four years.

“I didn’t think I was going to get as many saves this year, just because our defense is a lot better than it has been in the past,” Meyer said.

As a sophomore in high school, Meyer played basketball and swam, but wasn’t passionate about these sports. So she figured she would give water polo a shot. Now, she can’t imagine life without it, she says.

Despite her success in front of the net, Meyer did not start off as a goalkeeper.

“I actually played in the field for most of my high school career, and played goalie my last year. So starting again as goalie in college my freshman year, I didn’t play at all really,” Meyer said.

Meyer said the main reason she came to Cal Lutheran was for the water polo program.

“I wasn’t sure about the school. I mean, I liked the campus, but when I met the coach, I was like ‘Yep, this is it,” Meyer said.

Since becoming a Regal, she said the team has become family and the coaches have played a huge role as mentors in her life over the last four years.

Hirn, who has competed alongside Meyer for the past three seasons, praised Meyer for her leadership on the team both in and out of the pool.

“She encourages everyone in the water, whether it is during practice or a game. She brings such positive energy to the team and really just brings everyone up around her,” Hirn said.

After graduation, Meyer is weighing several options. She is either going to apply to graduate school in Scotland and continue playing water polo or she will begin working right away. She has a passion for coaching and said that is one possibilty.

“What I’m going to miss most is that it’s just been a family from start to finish,” Meyer said.

As the season nears its end, Meyer said she will miss the Cal Lutheran water polo program. Her teammates and coaches reciprocate the feeling.

“I’m going to miss her personality the most. She brings so much laughter and positivity to the team, and I’m also going to miss having her in the pool with me and watching her make amazing blocks,” Hirn said.