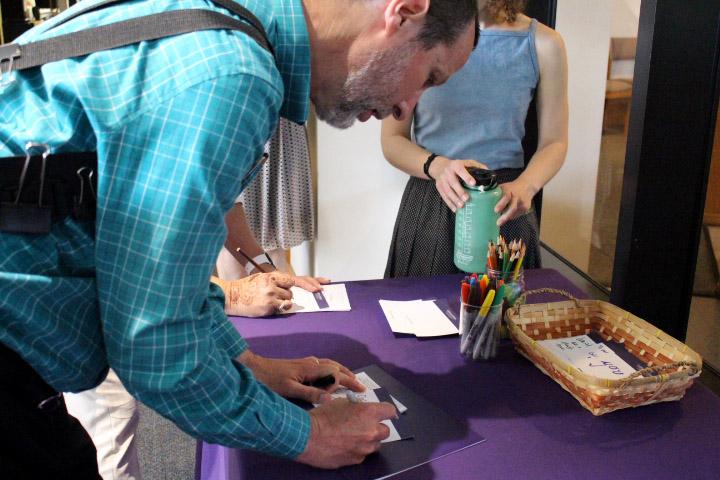 Come together: Chapel hours May 2 was dedicated to a service for Holocaust Remembrance Day. Students, faculty and Cal Lutheran community members wrote letters to pay respects to the nearly six million Jews who were killed during WWII. Photo by Jessica Colby - Photojournalist

On May 2, faith leaders from California Lutheran University gathered with students at Samuelson Chapel in honor of Holocaust Remembrance Day. Yom HaShoah is recognized internationally as an annual day of reflection to honor the nearly 17 million lives lost during World War II.

Rabbi Belle Michael and Reverend Scott Maxwell-Doherty welcomed students into the chapel for the interfaith service. In her opening statement, Michael reflected on the April 27 shooting at Chabad of Poway synagogue in San Diego and a shooting at the University of North Carolina Charlotte.

“Today, we remember what blind hatred can do to us,” Michael said. “And come together to celebrate our differences.”

Sophomore Sophie Katz, co-president of Hillel Club, told the congregation the story of her grandmother and Holocaust survivor, Frances Katz. Frances Katz now has Alzheimer’s disease and is unable to share her experiences, but she has previously written about what she remembered from the war.

Frances Katz was a child during World War II. She survived the war despite her home being destroyed during a bombing raid and her father being killed. After immigrating to the United States, Frances Katz went on to become the mother of several children and a beloved grandmother.

Frances Katz regularly told her family about her experiences during the Holocaust and is deeply committed to her Jewish faith.

Sophie Katz read her grandmother’s words aloud and reflected on the importance of speaking on behalf of those who are no longer able to share their stories with the world.

On surviving World War II, Frances Katz wrote, “we were some of the very fortunate ones who survived.”

“Hatred is hatred. It’s very blind and… people buy into it. So, we need to keep reminding them where it can lead, every year,” Michael said.

Michael said she believes the primary importance of Holocaust Remembrance Day is an act of solidarity with those who continue to lose their lives in acts of senseless violence.

Michael said Jewish people have historically been seen as the archetypal “other” as a way to socially scapegoat them.

“However, we are all the other,” Michael said. “Unique. That’s what makes us human.”

Yom HaShoah is a day for reflection and a commitment to one simple act: to remember. Cal Lutheran has hosted an event on campus in recognition of the International Holocaust Remembrance Day for the last 10 years, typically in partnership with Hillel Club.

This year’s Yom HaShoah also included a campus walk in addition to the service, which was attended by the provost, university president and other leaders of the Cal Lutheran community.

Maxwell-Doherty recited a closing prayer based on one written by Rabbi Jonathan Sacks.

“What happens when humanity fails to recognize that those who are not in our image are nonetheless in God’s image?” Maxwell-Doherty said. “We remember and pay tribute to the survivors who are witness to what happened and to the victims that [were] robbed of their lives, they will not be robbed also of their deaths.”

A closing hymn was sung by first-year student Lola Chen and sophomore Chelsea Darnell, accompanied on the piano by the chapel music coordinator Jessica Helms. Attendees were welcomed back into the lobby to enjoy refreshments and reflect on the impact of violence in the world.