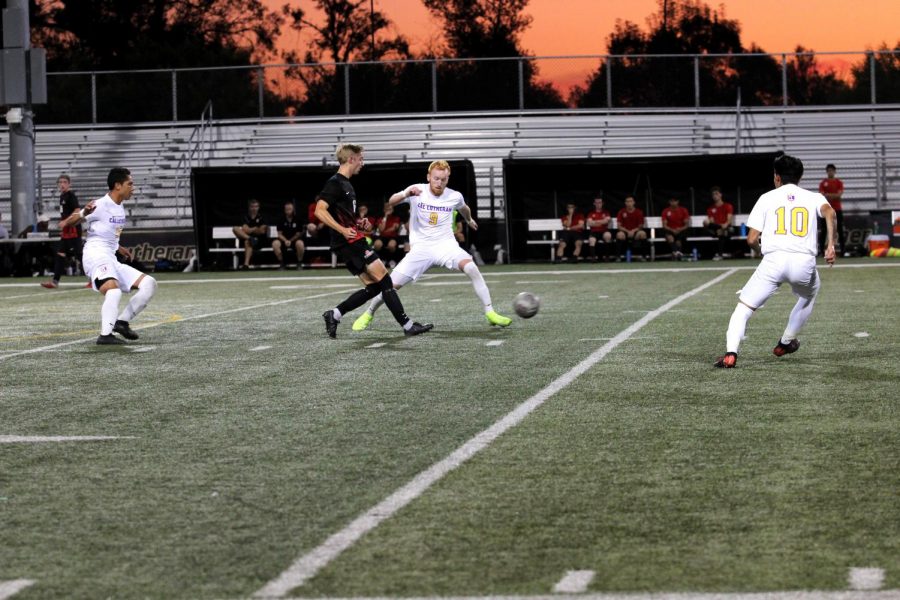 Senior forward, Aaron Winsick, made the first goal of the night against the Foresters.

The Kingsmen captured their second win in a row, defeating Lake Forest College by a score of 2-1. Coming off a home win last Sunday, the Kingsmen looked to take full advantage of their streak.

“We’ve just been grinding and getting ourselves better every single day, you know what I mean. We knew that our preseason was going to be tough and we haven’t had an easy game. We are seeing different types of teams that I think will hopefully prepare us for SCIAC so we can have a good run at it,” Head Coach Miguel Ruiz said.

The Kingsmen proved too much to handle for the Lake Forest College Foresters who traveled all the way from Illinois.

Right out the gate, the Kingsmen pressed the Foresters’ defense, creating an opportunity for an early goal by senior foward Aaron Winsick at 7:52 in the first half.

Pressure was building for the Foresters to make a comeback as the end of the game approached. In the 81st minute, Erik Truitt of the Foresters scored a goal, closing in on the scoreboard.

The Foresters continued to press, but sophomore goalkeeper, Owen Ebner, made a play to save the game for the Kingsmen.

With only five minutes left in the game, a foul was called within the penalty box. This led to a penalty kick for the Foresters, giving them an opportunity to tie and force the game into over time.

Ebner made a diving attempt at the penalty kick, blocking it and securing the win for the Kingsmen.

In the final minutes, the Kingsmen defense stepped up to the Foresters’ defense and was able to stop the final attack of the game and end with their second win in a row.

“Our keeper came up huge with a P.K. I don’t even know what the call was. So I think in the second half they just came out after us, and I think we survived and were about to do what we needed to do in the second half to finish the game out strong, which was exciting,” Ruiz said.

The Kingsmen look to move forward after their win and take on Claremont-Mudd-Scripps, September 18 at 7 p.m. at home.