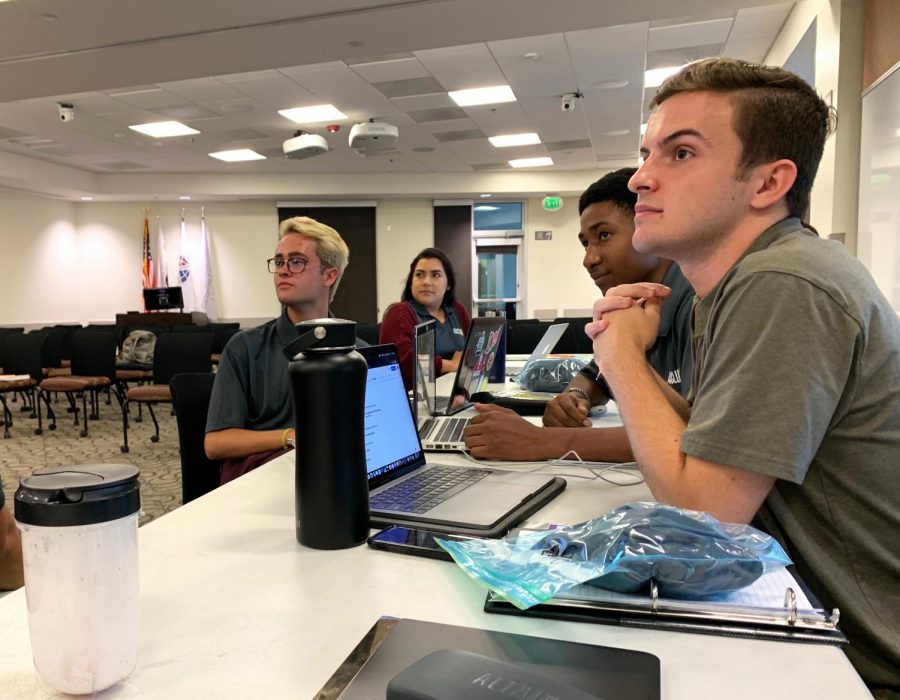 Discussing the upcoming semester: From left to right, Garrett Wyatt, Maria Reyes, Josh Gatison and David Bryant at the ASCLUG Senate meeting last Monday. Voting for Senate elections opens at 8 a.m. on September 19. Students can vote on the Spine or on Blackboard

This past Monday, September 9 Associated Students of California Lutheran University had their first meetings of the semester. Senate and Programs Board met to discuss the new school year, upcoming elections and events.

On Thursday, September 19, students can vote for representatives in the Senate. This includes four first-year positions, one junior position, one international position, one transfer position and one commuter position.

Voting will take place on the Spine at Cal Lutheran. There will be computers set up from 8 a.m. to 5 p.m. Voting will also be available online on Blackboard, under My Organizations.

Basmajian said these proposed changes have gone through the Executive Cabinet and will go to Senate and Programs Board next. Once approved by these two divisions of ASCLU, the student body will have the ability to vote on the changes within the next couple of weeks.

“They’ll see everything and have a vote in everything that happens,” Basmajian said.

Along with proposed constitutional changes, ASCLU now allows students to attend all meetings for a public comment section. Meetings will be held on a weekly basis for both Senate and Programs Board. Senate meets on Mondays from 5:20-7 p.m. in Ullman 101, and Programs Board meets on Mondays from 7:15-9 p.m. in the Kingsmen Room in the Student Union. ASCLU will now allow students to publicly address their concerns at all meetings.

These public comments will be held at the beginning of both the Senate and Programs Board weekly meetings, Basmajian said.

“I really believe in servant leadership, and being there to serve students and make sure that they are able to voice their opinion,” ASCLU Relations Director Hannah Nandor said.

The ASCLU office is located in the Student Union building, and is open from 9. a.m. to 5. p.m., Monday through Friday. Executive Cabinet, Senate and Programs Board also have contact information available online at the ASCLU webpage.

“Reach out to me with any concerns or comments [students] have, I just want to hear their voice so I can be a voice for them,” Basmajian said.