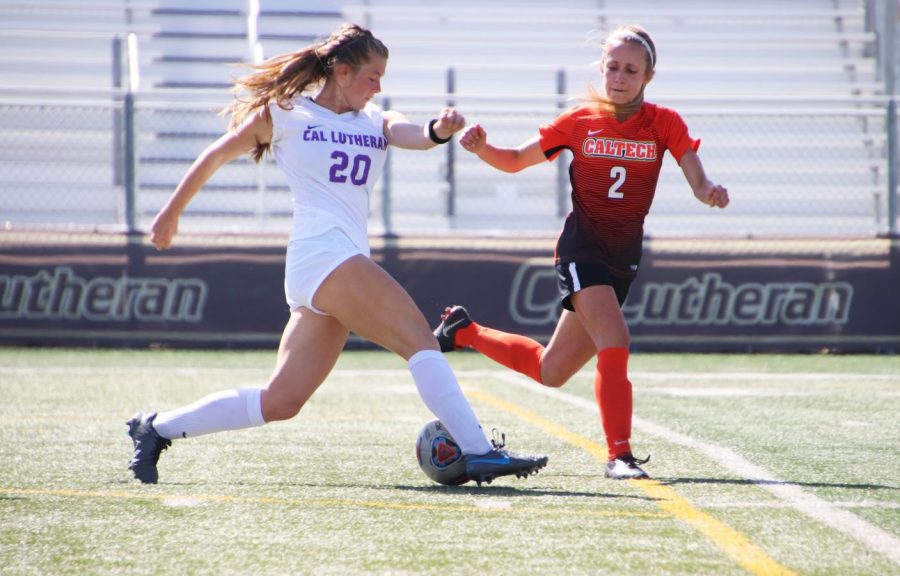 Alexandra Fagerberg, junior forward, scores her second goal of the season against Caltech.

The Regals captured their first conference win of the season, taking down the California Institute of Technology Beavers by a score of 4-0. After losing in double overtime to the Whittier College Poets only three days before, the Regals looked to turn a corner and get their first Southern California Intercollegiate Athletic Conference win of the season.

“I was a little bit disappointed that we didn’t come out playing with the kind of urgency that we needed, especially coming off the loss on Wednesday,” Regals Head Coach Frank Marino said.

After starting their season 0-7, the Caltech Beavers could not handle the pressure of the Regals offense. In the first half alone, the Regals had 11 shots on goal, compared to the Beavers who did not complete a single shot.

“I was hoping for a little bit more urgency in our play. There were some moments that were really good and I thought we were doing some good things, but we didn’t really put a consistent good 45 minutes together in the first half,” Marino said.

After a slow start to get the Regals’ offense going, junior midfielder Hannah Trengove scored her first unassisted goal of the season at 42:41 in the first half.

“I was playing attacking mid and the ball just kind of shot out, and I was like, okay, I am going to take a shot and see what happens and maybe it will deflect and go in, and that’s what happened,” Trengove said.

Things seemed to turn around for the Regals in the second half, as they increased their tempo and improved offensive strategy.

At the 65 minute mark, junior forward Alexandra Fagerberg recorded her second goal of the season, extending the lead to 2-0.

Keeping the pressure on the Beavers, the Regals looked to extend the lead even further. One minute after Fagerberg notched her second goal of the year, the Beavers allowed another goal, making the score 3-0.

Urgency was key for the Regals throughout the game, Marino said. One minute before the end of the game, first-year forward Ella Velcelean scored her first goal of her collegiate career, solidifying the win for the Regals.

“I am really excited, and I am just looking forward to the rest of the season with my amazing teammates,” Velcelean said.

Moving forward, the Regals look to find their pace and ultimately secure a spot in the SCIAC championships at the end of the season.

“I think we just have to get back to how we were playing earlier in the season,” Marino said. “We went to Texas and played two really good games and some good soccer. Since we went back home, we haven’t consistently played at the same pace and the same level that we played there. I don’t know what we have to do find that, but we have to find that same energy.”

The Regals look to continue their play this week, taking on conference opponents Chapman and Claremont-Mudd-Scripps Wednesday, Sept. 25 and Saturday, Sept. 28.