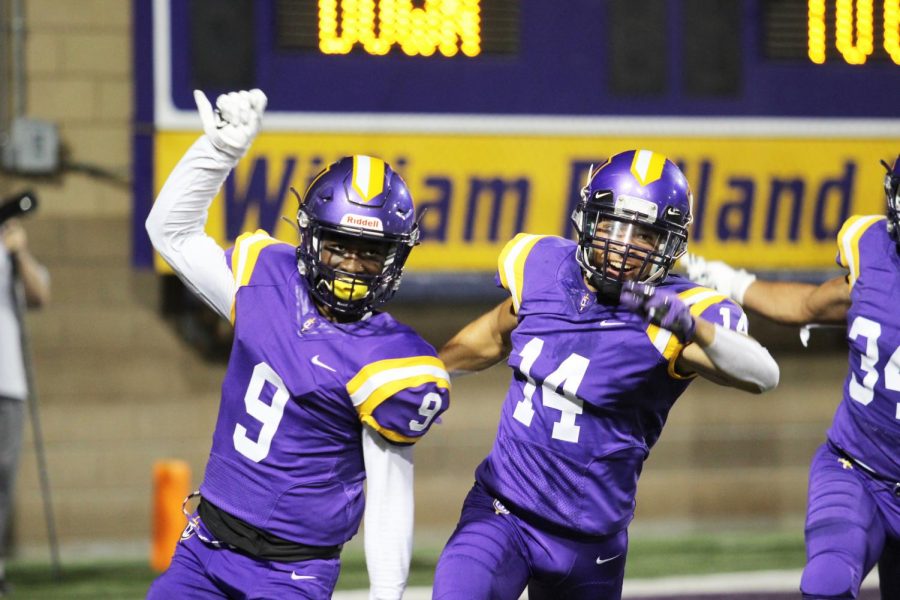 The California Lutheran University football team took to the field Saturday night for its home opener against Pacific University of Oregon.

Competing at William Rolland Stadium, the Kingsmen took advantage of the energy from the crowd to route the Pacific Boxers by 45-28.

The Kingsmen players seemed to use the crowd’s electric energy as motivation to propel themselves forward and keep the intensity high.

“Our fans and our student body showed up tonight. That was awesome, so thank you to the students that came here,” Kingsmen Head Coach Ben McEnroe said. “I mean they were on their feet. The place got loud a couple times. It was really cool to see that energy in the stadium.”

Coming off a loss against Pacific Lutheran University on Saturday, Sept. 14 the Kingsmen looked to come out of the gate strong and focus on playing shutdown defense, keeping the ball in the hands of the Kingsmen offense as much as possible.

“Our mindset this week was just getting better, you know, just working on stuff that we messed up last week. It was really just taking the parts and really working them together. We’re being one defense, like last game we had one part of the defense that didn’t really work, but now we combined and it really showed,” said sophmore defensive linemen Thomas Bambrick.

As the defense in the first half proved too strong for the Boxers’ offense, it was time for the Kingsmen offense to make drives and get the ball in the endzone as many times as possible.

First-year wide receiver Cameron Jones had a strong first half, receiving two touchdowns from senior quarterback Cesar De Leon, ending the first half with a 25 yard reception into the endzone which extended the lead to 38-0.

“Honestly, we wanted to come back from last week. We knew exactly what we were capable of, so we just had to refine the chemistry between the quarterback and the receivers and we just opened it up,” Jones said.

The Kingsmen were determined in the first half, relentlessly scoring as they looked to change the script from their last game in Washington.

“Last week we came out really slow in the first half. It was probably the worst half of football I have played in my life. The goal this week was to come out strong and stay strong the whole game. The first half was to keep driving, driving and driving,” said junior offensive lineman Chris Leveque.

“I think we were just completing stuff. I just found a really good rhythm, and my receivers, I mean I got some studs with my receivers. They make my job look really easy. They made some great catches so I put it all on me,” De Leon said.

In the second half the Boxers came out stronger. With almost 10 minutes to go in the third quarter, the Boxers scored their first touchdown of the game.

Notching one more touchdown pass in the second half allowed for a Kingsmen lead of 45-7. Substitutions were made by the Kingsmen to give the starting lineups on offense and defense a rest.

“We tried to play a bunch of guys. The first score that they had came off of a special teams mistake, so they were on a short field. You’re going to score 80 plus percent of the time on a short field. After that we unloaded the bench. We came back down and scored another touchdown. That was 45-7. We were playing second and third team guys the rest of the way,” McEnroe said.

The Boxers had a strong fourth quarter, scoring three more touchdowns, but it wasn’t enough as the Kingsmen took their first win of the season by a final score of 45-28.

“Every game comes from practice. This is probably our best week of practice we had all season. We come out and practice and we practice hard every single day and don’t let any day up, like in walkthroughs and in mental reps. We make sure everything is perfect, and we come out strong in the game,” Leveque said.

The Kingsmen will take on non-conference matchup University of Wisconsin-Stout at 1 p.m. on Saturday, Sept. 28 at William Rolland Stadium.