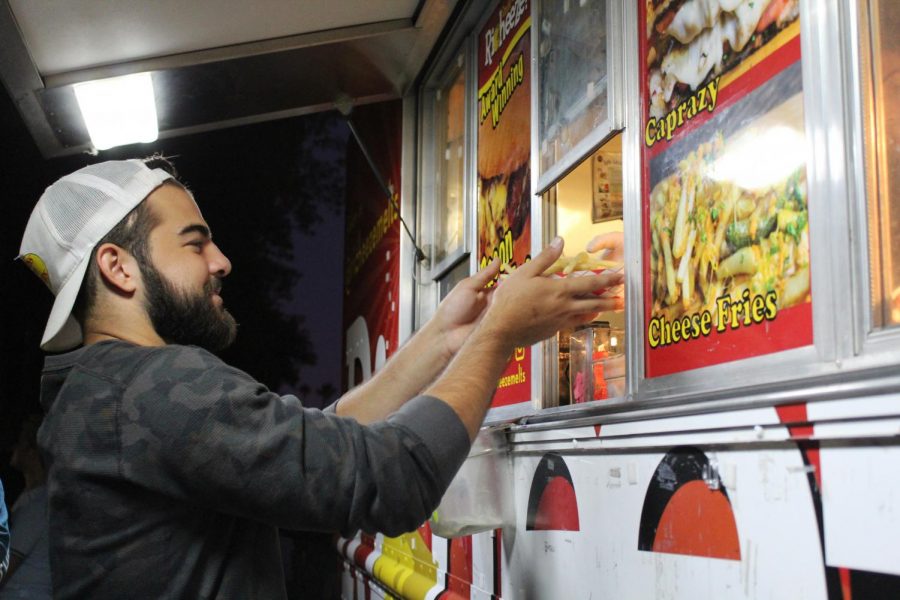 Azubah Collins, ASCLU junior representative, assisted clubs in creating the games and planned most of the carnival with help from Programs Board Director Chelsea Dunmire.

Collins said she worked to include a variety of food options to accommodate the dietary needs of students.

“I know I wanted a lot of food trucks cause that’s really what students love to see is that free food option,” Collins said. “So I really took a lot of time trying to combine having vegan, vegetarian, dairy free, like any type of food restriction or allergy that someone would have to have in all the food trucks and also diversity in food.”

Go Fusion Poke Bowls, Richeeze Grilled Cheese and Main Squeeze Lemonade were some of the options at the fair.

Giana Marie, a graduate student at Cal Lutheran, was one of iCLU Radio’s Co-Program directors for the night. iCLU oversaw the music for the night, Marie said.

Marie attended the event with junior Tatiana Gabrielle. They brought along their younger cousins, two-year-old River and five-year-old Hendrix.

“We went to the [homecoming] the year before last, and we were showing [the children] pictures and they were so excited,” Marie said. “So we’re like ‘lets bring them to the carnival this year’.”

River and Hendrix danced along with the music as they showed off their face paint.

The face painting booth at Fall Carnival did not have traditional animal face designs. Instead, the Work of Heart face painting employees decorated the students’ and childrens’ faces with glitter art. A poster showed the different designs available, and students were able to pick the colors of their glitter and face paint.

“The glitter is made from a eucalyptus cellulose, so it breaks down in warm water,” said Angel Santori, one of the workers. “It’s not made from plastics, so therefore it is environmentally friendly.”

This was not the only unique touch to the carnival. Along with the music provided by iCLU Radio, there were live performances. One of these was by junior Marc Quezada, in the third performance of his career.

“Honestly, it feels incredible. All the love given by the fans was fantastic,” Quezada said. “It’s my goal to perform in front of anybody and just kind of share my message of positivity and just try to give a light mood to anybody’s energy.”

There were also inflatable rides at the carnival. ACLU President John Basmajian even got in on the fun as he jumped around in the Hungry Hippo game.

Other games included classic carnival games such as three-legged obstacle courses and can knock downs. These games were run by different clubs as a way to promote their organization.

The Happiness Club was one of the clubs at the carnival. Member Dani Hazan said their ‘fish bowl’ game had also been featured at the Involvement Fair, and this was a “perfect opportunity” to bring it out again.

Depending on how well students did in the games, they could qualify for raffle tickets to win prizes. The prizes included a GoPro, an Apple Watch, an Echo Dot and an Away luggage.

The winners were contacted Saturday morning via email.

Students at the event could get a small keepsake in the form of a photobooth photo, as they were able to go inside a green Volkswagen bus and pose with different props.

Cal Lutheran has had carnivals in the past. However, families would have to pay to enter, Collins said. Programs Board combined the carnival with a past event called Food Truck Frenzy to come up with the foundation for this year’s Fall Carnival.

“I kind of brought a little bit of everything [to] it when I was given the project and started to make it happen,” Collins said.