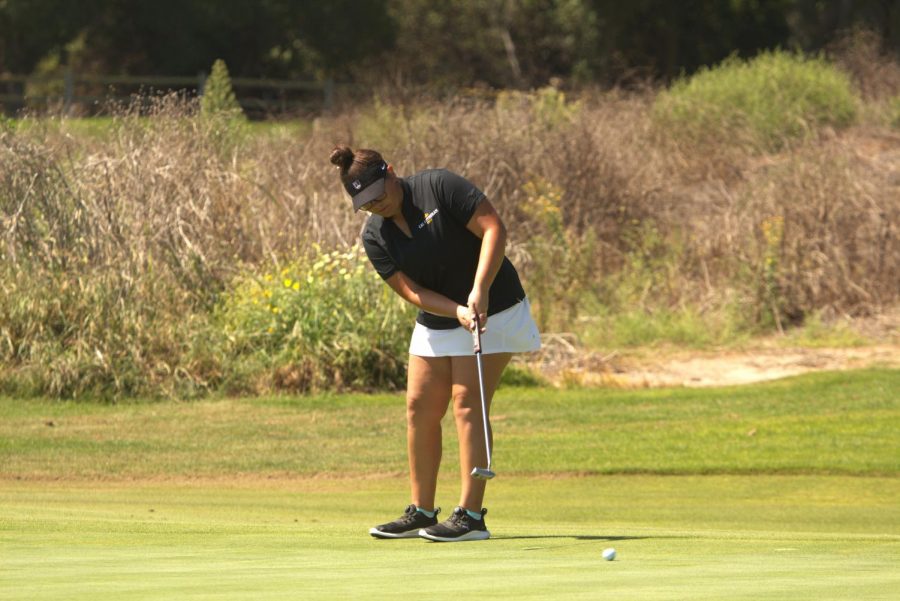 The California Lutheran University golf teams have started off the year with a plethora of record breaking swings. Only four weeks into the school year, both the men’s and women’s teams have already broken the previous program records for Cal Lutheran.

Both teams competed in the California State Intercollegiate tournament on Sept. 16 and 17, where each team had the opportunity to showcase their talent.

First-year Claire Cornejo had an especially impressive tournament. She set the program record for the individual 36 hole tour, with a score of 147, said Head Coach Jeff Lindgren, who coaches both the men’s and women’s teams.

“I love being on the team, it’s awesome. My sister’s on the team too, so it’s really cool,” Cornejo said.

Seniors Erica Mitchell and Brooke Logsden did their part to put their names in the record book as well. Mitchell shot a 154, placing 18th with 10-over-par and Logsden shot a 151, tying for 11th with 7-over-par. Lindgren said the two have been instrumental in the team’s success.

The next weekend, the women’s team competed again at the Bulldogs Classic on Sept. 21 and 22. The Regals broke their team record with combined scores of 311 and 294.

“I want to go to nationals as a team… we have four seniors, and it’s stacking up to be a cool experience for all of us,” Cornejo said.

The men’s team was also successful at the first couple tournaments this year, with several players claiming their spots on the program records list. First-year Jeffrey Perry placed first of all 57 players in the California State Intercollegiate tournament with a score of 208, Lindgren said. This new record wiped the old one out by four points.

“As a freshman there isn’t a lot of expectations, so you kind of get to go out there and just do your best,’’ Perry said.

Lindgren intends to bring fall’s success into the spring season.

“I think I’ve done a pretty good job of recruiting, and I feel confident in the freshmen and their abilities, and now they’ve gone out and shown that they really can back that up,” Lindgren said.