The art legend that is De Lesprie 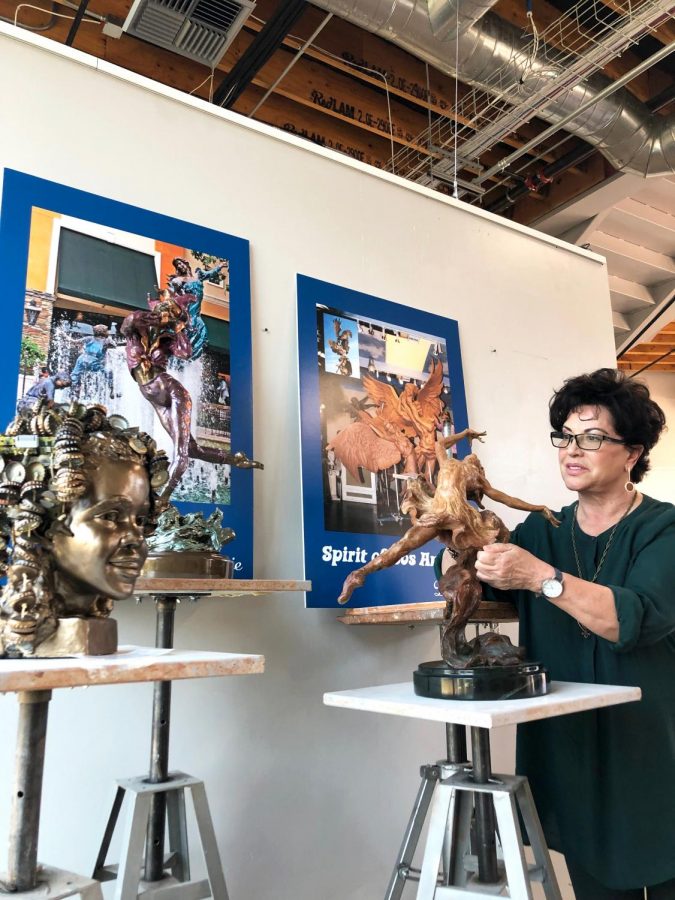 De Lesprie’s latest sculptures include a native Ethiopian girl with bottle caps as hair (left) and a girl dancing (right).

“I started doing art when I was a young girl,” Lesprie said. “I was hiding mostly in cupboards, closets and under the bed from my father because he was an alcoholic and he was a terror. I started painting along the baseboards underneath everybody’s bed in our house.”

Lesprie’s mother was a painter and her sister is now a sculptor as well.

Lesprie said her first venture in sculpting was in Canada at a Native American reservation. Lesprie said when she was younger she never believed she would be able to make a living from it.

Now, Lesprie’s sculptures, statues and monuments are on display across the globe.

In Thousand Oaks, her work is displayed at The Promenade at Westlake, Janss Marketplace and at Los Robles Regional Medical Center.

According to her website, her featured sculptures in the Los Angeles area also include President Eisenhower at the Eisenhower Medical Center, a bust of Dick Van Dyke and his wife Arlene Silver at the Midnight Mission, Spirit of Los Angeles at the Grove and Gene Autry at the Autry Museum of the American West.

“I was doing a sculpture on my kitchen table and John Wayne’s son Michael Wayne saw what I was doing and asked me to finish [Statue of Crazy Horse] for him,” Lesprie said. “That piece was seen by Jackie and Gene Autry and they felt that because if I could sculpt…Crazy Horse with the dignity and pride that I depicted, then I could sculpt Gene and the gentleness and the warmth that they wanted him to be portrayed.”

She said Sylvester Stallone and Arnold Schwarzenegger have both seen her work and asked her for commissions as well.

Despite her celebrity clients, Lesprie said she has always believed she is a better teacher than she is a sculptor.

Professor of Multimedia and Chair of the Art Department Timothy Hengst said the art department hired Lesprie because she demonstrated great quality and the students showed much development when under her advisement.

“She did a remarkable job with the students. Their quality of their work was remarkable, and she worked really hard with them and developing their sculpture skills,” Hengst said. “We have that class again in the spring, and thought that during the fall would be a good opportunity to get other students on campus familiar with her work and maybe excited about the opportunity of taking sculpture as well.”

Heather Nelson, a student of Lesprie, started sculpting last semester in Lesprie’s class. Nelson said Lesprie made it very easy to understand sculpture. She said now she has an overall understanding of human anatomy and sees how little things add up to make big differences.

“She is so talented, and is a great teacher because she really gave a lot of constructive criticism and encouraged us to try our best. She was really understanding and was really looking forward to us improving throughout the whole semester,” Nelson said.

The sculpture Lesprie is working on during  her live art demonstrations is a life size bust of a native Ethiopian girl. The sculpture will be made out of clay and mixed media including gourds, plants, grasses and body paint, Lesprie said.

“I just hope everybody comes by to see what it looks like when I’m doing it, so that they can see the process,” Lesprie said. “It’s attainable for students and attainable for anybody out there in the community.”