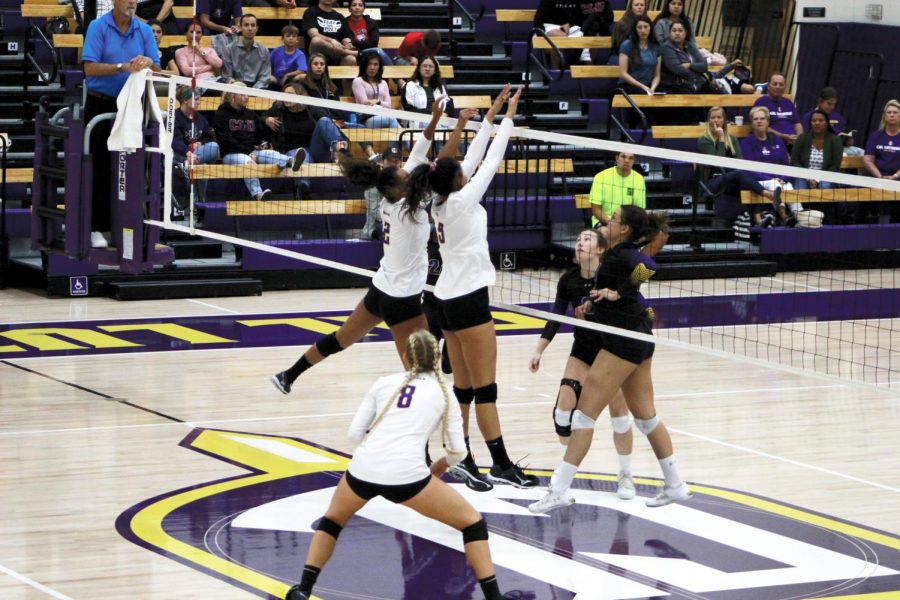 Regals volleyball dominated in a straight-set victory against Whittier College on Friday, Oct. 4, coming in with an 3-2 record in the Southern California Intercollegiate Athletic Conference.

The team was coming off a two-game losing streak to Claremont-Mudd-Scripps and University of La Verne.

“The message this week was that we are going to work on our game and let them worry about us. We have certain things that we do that defines us as Cal Lu volleyball and I thought we played like that for the majority of a match, so that was really good to see,” Head Coach Kellee Roesel said.

Junior opposite hitter Mackenzie Martinez and first-year middle blocker Christina Williams both felt like this game demonstrated what Cal Lutheran volleyball is all about.

“It felt really good tonight. We were just trying to focus on playing CLU volleyball and we finally felt like tonight we did that. So we are gonna take what we did and run with it and keep doing what we are doing because everything worked tonight,” Martinez said.

“We just need to keep progressing. We feel like most of the teams that we play are veteran groups, and we are very young and still trying to figure out a lot of stuff so we feel like we can progress a lot and improve in a lot of areas, so that is what is really exciting for us,” Roesel said.

The team played their game and didn’t worry about what was happening on the other side, Roesel said.

“We really have that ‘never give up’ mentality, and we want to carry that with us through the end of the season and see where that takes us,” Williams said.

A huge focus for the team this season has been practicing hard.

“We have had a couple hard practices and we’ve just been focusing on balling out and doing the best we can, and going on we just want to continue to play like this and play Cal Lu volleyball,” Martinez said.

“It was a key win and we really set our standard on how we should play here on out and I think this is how it is going to be,” Williams said.

The Regals are now tied with La Verne for third place in SCIAC.

“Everybody in the SCIAC is good this year, all of the coaches are really good but I think having a young group, we just have a high ceiling right now and I think if we keep improving that will give us the best shot to vie for the conference title,” Roesel said.

In 2017, Cal Lutheran came in third place in SCIAC and in 2018 they came in second. In 2015, the Regals were national champions in the National Collegiate Athletic Association.

“I was really pleased with the group effort today. We played our game for three sets and we played at our pace for the entire match,” Roesel said.

The Regals lost to Chapman University on Saturday, Oct. 5, giving them a 10-8 record. Catch the next game against The California Institute of Technology on Tuesday, Oct. 8 at 7 p.m.