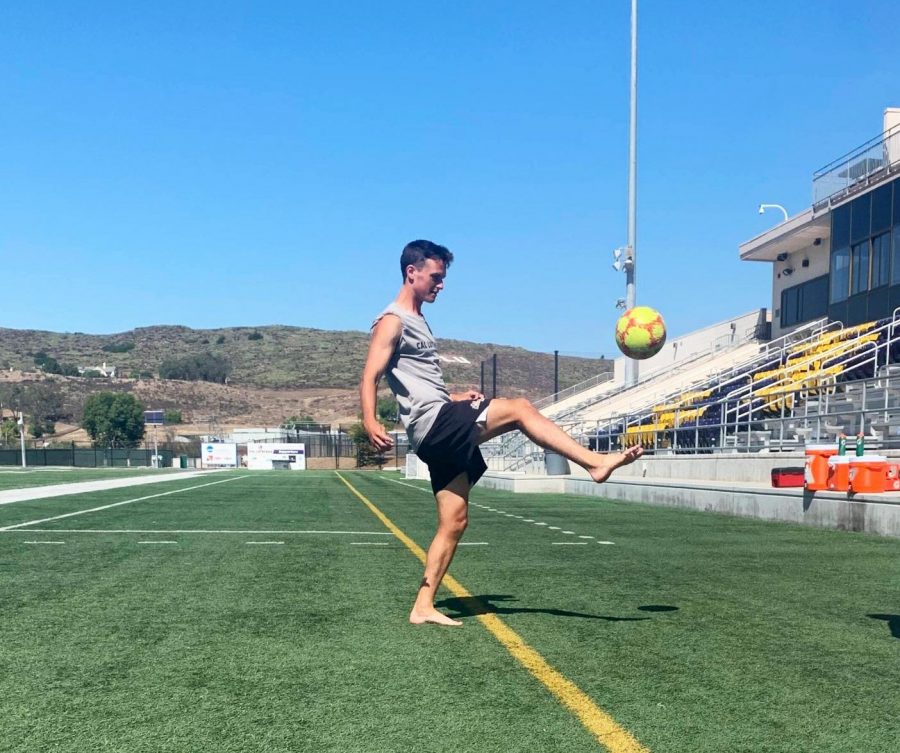 Sophomore Cameron Korshavn practices for the next varsity soccer game at the University of La Verne on Oct. 9.

Sophomore varsity soccer defender Cameron Korshavn has had a whirlwind career at California Lutheran University. Having barely started his second season with the Kingsmen, Korshavn has already been awarded athlete of the week.

“I was shocked, but I mean a little bit excited because something like that doesn’t really happen too often,” Korshavn said.

Korshavn is from Torrance, California where he attended West High School and played  club soccer for LA Galaxy South Bay.

As a first-year, he came to Cal Lutheran with little expectation for playing time, but soon realized there was room to grow on the team. Once practice started, Korshavn knew he was going to need to step it up.

Both coaches and teammates describe Korshavn as someone who puts in the work.

“It’s all him, he’s come in here and puts in the time. He talks to us and asks what he needs to do better, then goes out there and does it,” Ruiz said.

Roommate and fellow teammate Nick Bryant described Korshavn as someone who brings his “A-game” and is always there to lend a helping hand.

“It’s super fun playing with him. He’s super helpful and I think he just contributes to the team a lot,” Bryant said.

Both Korshavn and Bryant described one of their most successful team feats as the chemistry they have achieved on and off the field. Ruiz said the team is  “young, with only four seniors and two juniors,” but this hasn’t stopped the players from finding their groove.

“We’ve been continuing to grow our chemistry. You can even see from freshman to sophomore year the chemistry has grown,” Korshavn said.

Ruiz is looking to the future for this team’s success and cites players such as Korshavn as instrumental to achieving their goals.

“He gets down to business– just a blue collar player. He puts the work in, and it’s great for our team,” Ruiz said.

The athlete of the week award was given to Korshavn after the Kingsmen took on the Pomona-Pitzer Sagehens, defeating the team 1-0. This was their second conference win, putting their record at 2-1. Since then the Kingsmen have defeated Chapman University and lost to Occidental College, leaving their current record at 3-2. On Wednesday Oct. 9, the Kingsmen will play the University of La Verne.

Ruiz said his team takes the season “one game at a time”  so his players can focus on the task at hand. If players and coaches start worrying about games that won’t happen for weeks, then they cannot expect to perform their best at the current game. Staying focused is a big part of the team’s success, Ruiz said.

“Coach always tells us not to look past the next game on the schedule, on Saturday we have Occidental, but I don’t even know who we play after that,” Korshavn said.

Korshavn said the Kingsmen were originally slated as second to last in the Southern California Intercollegiate Athletic Conference, but with their current record, they are tied for fourth. Both coaches and players hope to finish the season strong, and to continue to build their chemistry on and off the field.