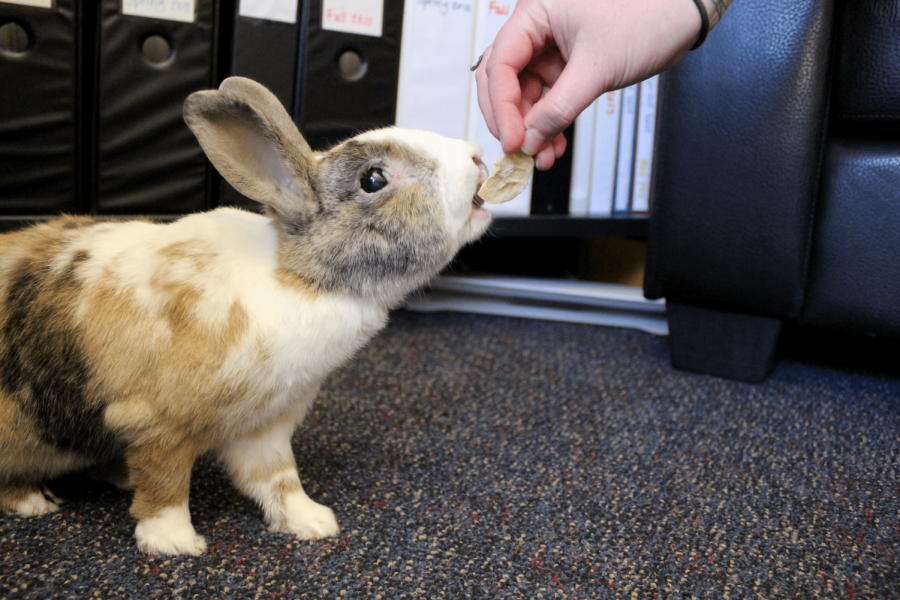 Nemo, the male therapy rabbit, receives dried bananas– his favorite treat– from his handler and Interim Director of CAPS Beth Turner, who is credited with bringing these rabbits to Cal Lutheran’s campus.

Mocha and Nemo are two therapy rabbits that started work on Oct. 16, 2018 at California Lutheran University. They work part-time with their handler, Beth Turner, interim director and licensed psychologist at CAPS.

“I have had rabbits for over 10 years now and I’ve always been interested in animal assisted therapy,” Turner said. “I always thought I had to get a dog to do that. And then I found an international organization that recognizes rabbits as well as llamas and guinea pigs and all that stuff.”

Turner adopted Mocha and Nemo to train them as therapy rabbits.

Mocha is the female and oldest rabbit of the two. She has a soft brown coat. Nemo, male,  is multicolored from white to light brown and even some black.

Olivia Huffman, a senior and religious studies major, was one client that used the rabbits in the past, although she is currently studying abroad in Scotland.

“I have worked with the bunnies a handful of times, and absolutely enjoyed the experience!” Huffman said in an email interview. “They were a calming presence for me, and provided a great deal of comfort during some difficult times. Realizing how much they helped during my situation encouraged me to start the process of getting a support animal of my own, and I couldn’t be more grateful to CAPS for all they have done to help me.”

Huffman said the bunnies are a valuable asset to CAPS and she would love to see more animals in the program.

In order to be qualified for therapy, Turner said the rabbits had to pass various tests to get certified.

“Are they safe? Are they not gonna bite? And that type of stuff,” Turner said. “They also have a lot of stress endurance tests.”

Despite these requirements, there weren’t many hurdles to cross when the time came to introduce the rabbits to CAPS.

Licensed Psychologist Ginny Maril was the director of CAPS at the time of the introduction of the rabbits.

“I was excited at the prospect of being able to provide therapy animals to Cal Lutheran students,” Maril said in an email interview. “Dr. Beth Turner is very experienced in working with rabbits and brought the idea to me to see if it would be a possibility at CAPS. There were never any doubts that they would be helpful to our students.”

Maril said she never had any concerns about the rabbits, and it was a fairly easy process to bring the rabbits in.

“We had administrative support as well which made things go very smoothly,” Maril said.

The biggest difficulty with the rabbits was making the office “bunny-proof,” Turner said. She had to ensure the rabbits were comfortable and had a place to hang out, and that they had food, water and a spot for their litter. Turner said she had to move any wires out of the way in case of chewing.

Despite this, Turner said the best part of having the rabbits is “that I get to take my pets to work with me.” She said they provide great breaks for the staff and “everyone loves petting them and feeding them treats.”

To prevent any allergy related incidents, Turner said the office keeps a sign by the front desk reception area informing people that there may be rabbits present in the office and to inform the staff of any concerns or allergies.

“For those who have let us know about allergies, we schedule them on days that the bunnies are not here,” Turner said. “I also want to give a big shout-out to our housekeeping team, who do a fantastic job of keeping our offices cleaned and fur-free.”

Since the bunnies started working, they have had a total of 119 appointments with student clients, Turner said.

“The bunnies go nuts for bananas and banana chips,” Huffman said. “I encourage all who visit them to bring them these treats, as it will definitely provide a good laugh and earn you their hearts.”

Mocha and Nemo were a little shy and chose not to comment. However, Turner said you can find them working Tuesdays at CAPS or by appointment for any therapy needs. You can also follow their Instagram @mochaandnemo.