Justin Meek honored with flagpole by the Samuelson Aquatics Center 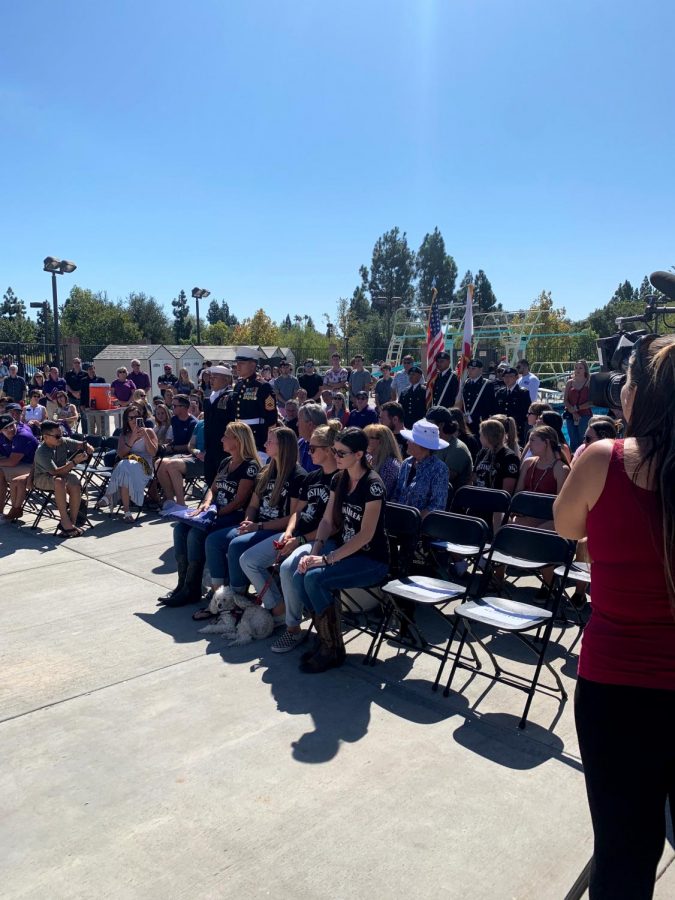 Close to a year after the shooting at Borderline Bar & Grill, students, faculty and alum gathered to commemorate late alum Justin Meek. Justin was a son, brother and friend to members of the California Lutheran University community.

Justin’s memory has been immortalized on the pool deck of the Samuelson Aquatics Center. After a close win by the Kingsmen water polo team, spirits were high as people gathered around the west side of the deck for the first ever flag raising on what is now the Justin Meek Memorial Flagpole.

Justin played for the Kingsmen water polo team and his younger sister Victoria Rose Meek plays for the Regals.

According to Swimming World Magazine, the new 35 foot flag pole was dedicated prior to a 2 p.m. match against Washington & Jefferson and following a 14-13 win against Chapman University.

The project was funded by the Blaauw family, who have a son on the team. Chuck Blaauw said he had very strong feelings about the tragic events of last November, which prompted him and his wife Roxanne Blaauw to make the donation.

“My wife and I lost a child as well… so there was a little bit of a connection there for us, and our son goes [to Borderline] a lot, so it could have been tragic for us all over again. It was that connection initially that prompted us to do this,” Chuck Blaauw said.

After the flag was raised and waved over the pool, attendees got up to speak on their memories of Justin. Cal Lutheran President Chris Kimball described Justin as someone who was always seen smiling on campus.

“He was such a great person, and to lose him so tragically was horrible. But to have a permanent remembrance that connects to his [Justin’s] love of country and his heroism is just wonderful,” Kimball said.

The Cal Lutheran community has hosted several events to carry on the memory of Justin, including a memorial bench dedicated in May.

Men’s water polo Head Coach of Craig Rond also spoke about Justin during the ceremony. Rond said he had the privilege of being Justin’s coach during his college water polo career. Rond told the story of his last encounter with Justin, where they talked about his future in the Coast Guard. Rond’s story left people in the crowd in tears.

“It was important to me for it to have the word ‘hero’ on [the flagpole] because really that’s the way I look at it. I call him a great American hero because he died in battle, and he died saving people’s lives,” Rond said.

Justin’s parents, Roger Meek and Laura Lynn Meek, both have military careers. Rond said this inspired Justin to pursue a career with the Coast Guard.

The flagpole will stand for years to come, so future students will know that Justin Meek, known by many as a “hometown hero,” attended their school.