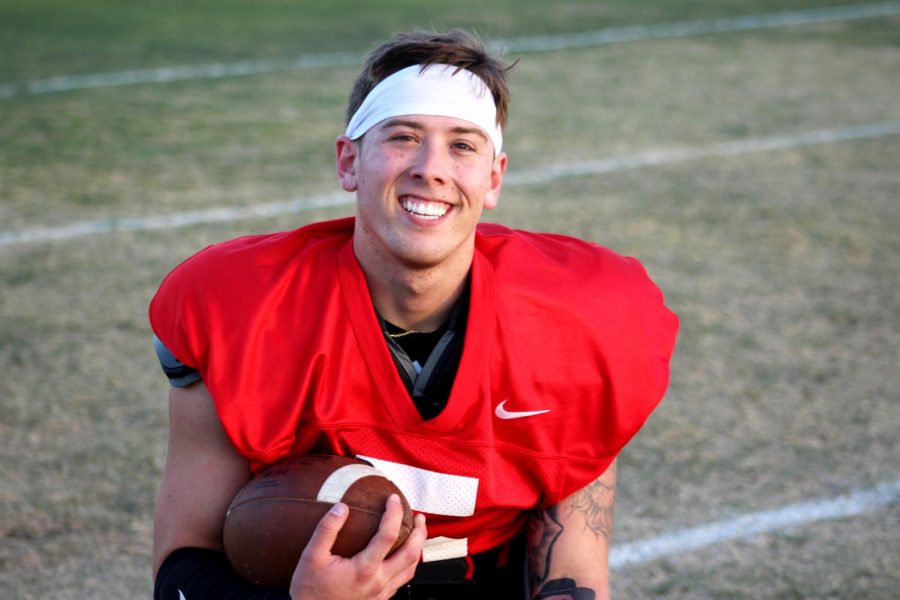 Senior quarterback Cesar De Leon has passed for 17 touchdowns and thrown two interceptions with a completion percentage of 63.9% in the Kingsmen’s first six games of the season.

De Leon, born and raised in Bakersfield, California, began playing football in third grade and has never looked back. His passion for the game began by following in his older brother’s footsteps.

“My older brother really was who inspired me to play football and to play quarterback. He was the first one that started playing. Being the youngest of three, he was the one who first put the football in my hand, taught me how to throw, and I wanted to be just like him when I was younger,” De Leon said.

Growing up De Leon admired athletes across all sports.

“When I was younger, LeBron James was someone that I looked up to. When it comes down to football, it’s always Tom Brady because he is the best of the best, and I always wanted to have a playing style like Brett Favre and Baker Mayfield,” De Leon said.

This season Cal Lutheran is 2-1 in the Southern California Intercollegiate Athletic Conference and 3-3 overall.

“He always puts the team first. He’s a leader and I love to have him as our quarterback,” Jackson said.

Holland said De Leon has had an impact on and off the field with his offense.

“He’s definitely someone that you want to keep on your team. He’s someone that can go out on the field and light your defense up and at the same time, we’re chilling watching TV together on the weekends,” Holland said.

“I love the way he holds people accountable and how he holds himself accountable. He’s a guy that can tend to be hard on himself at times, but it’s so rare these days to find young people that aren’t afraid to step up and say ‘hey man you got to pick it up.’ Cesar [De Leon] has that quality and it is serving well as a teammate so far,” McEnroe said.

This year, there are many new players on the team and McEnroe believes this has been important for De Leon feeling comfortable around his teammates and the offensive system.

“He’s a likable guy, so he knows when his teammates come at him for being too critical, he knows it’s not personal. No matter how old you are, the quarterback is expected to be one of the leaders on the team. He embraces that role and everyone respects him,” McEnroe said.

Goals and aspirations for the season include “winning the SCIAC,’’ Jackson said.

“We’re all in, and are going to do anything to win a ring,” junior wide receiver Jajuan Thomas said.

This is De Leon’s first year at Cal Lutheran after transferring from Northwestern Oklahoma State University. De Leon said he has enjoyed his experience on campus so far.

“I love it. I was in Oklahoma last year so I’m definitely happy here. I’m glad I made the switch. Everyone is really welcoming here and there is a family type feel that I love,” De Leon said.