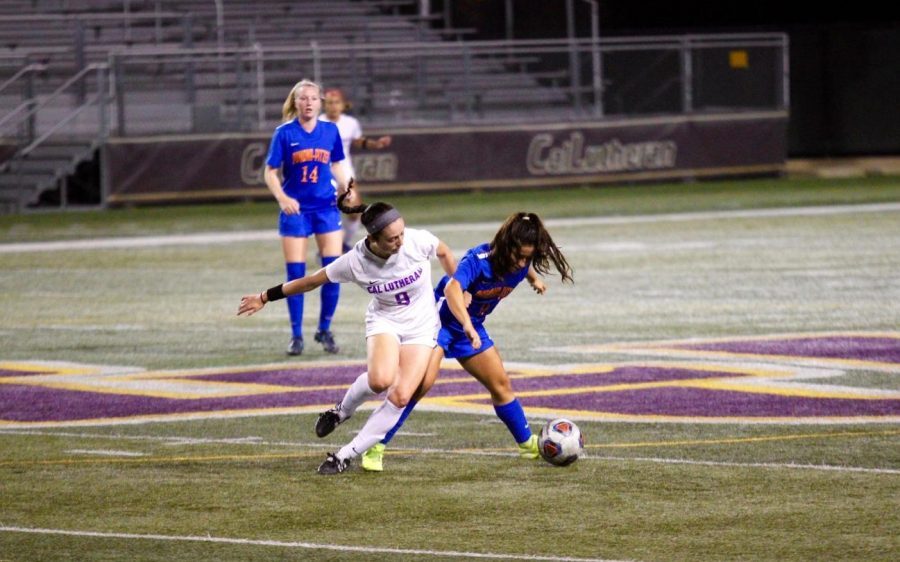 First-year forward Mandy Crawford goes after the ball against Pomona-Pitzer on Wednesday, Oct. 16.

On Wednesday, Oct. 16 the California Lutheran University Regals soccer team faced the No. 7 ranked team in the nation, the Pomona-Pitzer Sagehens. The Regals put an end to the Sagehens undefeated streak, winning the game 3-1.

“I think the most important thing for us right now is to keep the four game streak going and don’t get on a high horse,” sophomore forward Danielle Vis said.

Pomona-Pitzer had a handle on the game with 18 at-goal attempts throughout, but scored on only one of those attempts. Soto played  goalie all game with a total of 11 saves, one shy of her season record.

With a tight conference and facing an undefeated team, Head Coach Frank Marino said “We knew we had to get some points today.”

Going into the game against the highly ranked team, the Regals were determined to do everything they could to win, Crawford said.

“Looking at how they play and seeing what they do well, trying to make it as difficult as we possibly could on them and find our spots and pick places where we thought we could be successful,” Marino said on the game strategy.

During the first half of the game, Fagerberg scored the first goal in the 20th minute with the help of a tight pass from Crawford between two defenders.

Crawford said during practices leading up to the game they had the forwards move up and focus on finishing because they knew they weren’t going to have many opportunities to score in the game.

The Regals used Pomona-Pitzer’s weaknesses against them and made it difficult for them to keep up, Marino said.

Crawford scored the second goal of the game in the 50th minute with another tight pass to Vis.

Vis, playing left wing, has scored a total of three goals overall this season. Vis said it was “a lot of practice,” mainly focusing on finishing and taking opportunities.

“Danielle [Vis] is gaining confidence with her finishing — and tonight she showed great composure on both finishes,” Marino said.

The Sagehens did not give up easily. In the 73rd minute, senior midfielder Bria VarnBuhler hit a volley into the net when a corner was left open, putting the Sagehens on the board.

Vis secured the win with her second goal of the night in the 90th minute of the game.

The Regals came out with a win at the end of the night with nine at-goal attempts.

The Regals now have a five game winning streak after defeating the University of La Verne on Saturday, Oct. 19. In the Southern California Intercollegiate Athletic Conference, the team is 6-1-2 and has an overall record of 8-1-3.

The Regals will travel to Claremont-Mudd-Scripps on Wednesday, Oct. 23 and return home to take on the University of Redlands on Friday, Oct. 25 at 7 p.m.