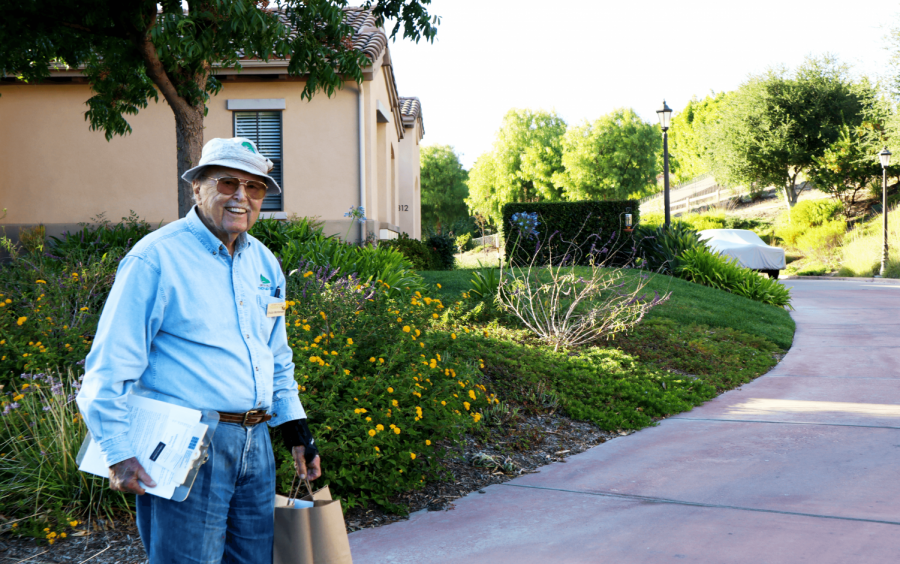 Chuck Mortensen, 95, gives a tour of University Village, a retirement community which is located across the street from California Lutheran University. Mortensen said he celebrated his 95th birthday on Saturday, Oct. 19.

As he emerged from the gates in front of University Village wearing aviators and carrying a clipboard, he asked “Are you looking for Chuck Mortensen?”

Mortensen said leaving his home in Northridge was a disheartening experience because he and his wife had worked on their house for years, but when he realized he couldn’t maintain it forever, he had to let go.

“My wife and I did the gardening. I cut the lawns, I edged the lawns, painted the trim of the house,” Mortensen said. “I realized maybe I don’t have to trim the lawns anymore…it added up to the point where I was ready to try something different.”

Mortensen was once a teacher, school counselor, vice principal and principal for the Los Angeles Unified School District. He retired from education after 35 years. Mortensen said he related tremendously to the transitional phase children experience while becoming adolescents and wanted to help young people on their journey.

It was his teaching background and the desire to give back to students that propelled Mortensen to participate in Cal Lutheran’s Communication Cafe. Communication Cafe is a weekly event intended for non-native English speaking students who can be mentored by individuals who have business or academic experience. Mortensen said every session he mentors is an enjoyable encounter with people whom he’s never met.

“I think it was the teacher experience that I had something to offer and give back to students,” Mortensen said. “I always end up learning more than what I give them.”

Ida O’Donoghue, fellow volunteer at Communication Cafe and fellow resident at University Village, said in an email interview that she had once been a neighbor of Mortensen in Northridge. O’Donoghue said she was the one who invited Mortensen to the cafe because his career in education made him an ideal mentor for students.

O’Donoghue said Mortensen is so dedicated to teaching young people that learning from him would be beneficial to any student. O’Donoghue keeps in touch with Mortensen by having dinner and listening to Mortensen and his wife Martha’s stories about the San Fernando Valley during the 30s’ and 40s’, O’Donoghue said.

“[Mortensen] brings a wealth of knowledge to the table,  he is a problem solver and is excellent at taking different points of view,” O’Donoghue said. She said that anyone who meets Mortensen will remember him for his open heart.

Mortensen said he graduated from University of California, Los Angeles in 1949 after coming back from World War II. Although Mortensen was never directly in combat, his task was to provide ammunition for his battalion. Mortensen said being in the army played an important role in his life. However, he always wanted to be a teacher or any position in education, Mortenson said.

Academic Advisor for the School of Management, Loredana Carson, who is in charge of Communication Cafe, said via email that all students who spend time with the cafe’s mentors will gain valuable knowledge.

“In general, students benefit greatly from time spent with our volunteers, including Mr. Mortensen,” Carson said. “I think all the volunteers will be remembered when these students return home for their positive impact on the students’ lives.”

Recently turning 95 has not stopped Mortensen from making his way to the Communication Cafe to volunteer. Mortensen said his birthday plans included drinking scotch and eating dark chocolate.

Mortensen said giving back to the community and hopefully making a difference can be done at any age. That is one of the many lessons he wishes young people to take away from his experiences.

“Well if there’s anything in my point of view it’s giving back… we want to give back to the community,” Mortenson said. “Instead of always being in a position of receiving, try to give back, even by doing small things.”

Ida O’Donoghue is not a resident at University Village.