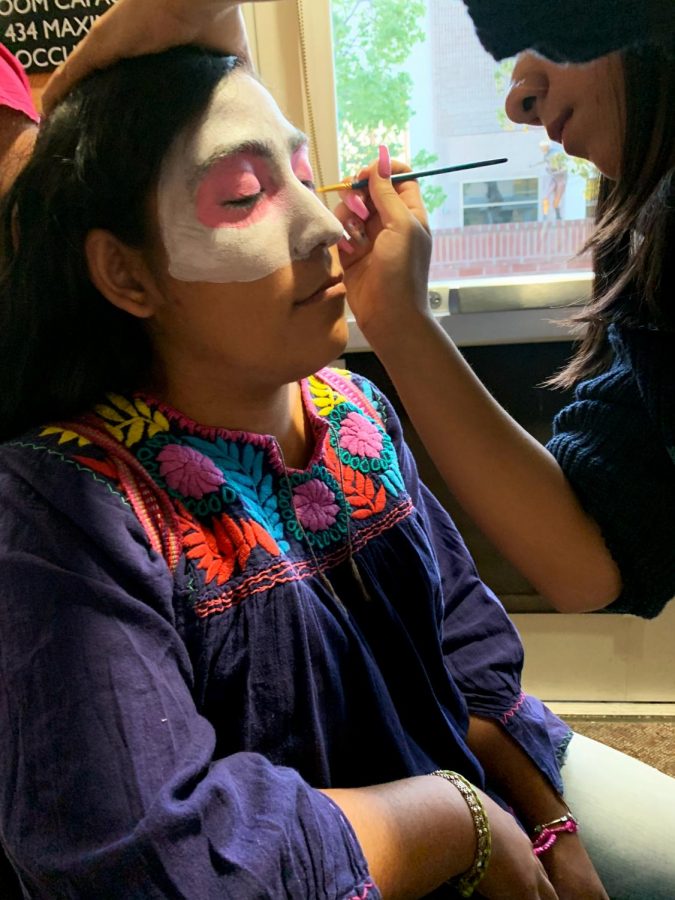 Abigail Espinoza Alfaro, publicist for the Latin American Student Organization, having her face painted at the event.

Dia de los Muertos is an event originating from Mexico that honors loved ones who have passed away. At the event, LASO provided games, crafts, music and a raffle for attendees. LASO also served pan dulce and champurrado for anyone who wanted something to eat.

First-year student and LASO club member Yuliana Montes volunteered as a face painter at the event.

“I enjoyed sitting there, looking around, watching everybody have fun,” Montes said.

Leslie Madrigal, co-president of LASO, said this event was centered around celebrating Dia de los Muertos while also educating and exposing others to Latin American culture.

“We try to bring awareness of our culture and just like educating people on like what our culture means to us while we try to like involve the community in it,” Madrigal said.

The Dia de los Muertos event was planned with the expectation that there would be people from the community of Thousand Oaks as well as students and faculty  in attendance. Madrigal said in the past, community members have shown interest in the holiday and the history behind it. Therefore, the event put an emphasis on cultural learning while still celebrating.

“I know Cal Lutheran itself is considered an [Hispanic Serving Institution], but I feel like if you look around the community within like Thousand Oaks for example, like you’ll obviously [see] a majority of white people,” Madrigal said. “So I feel like the school may be diverse but I know that the community—city as a whole—isn’t.”

Jonathan Gonzales, senior coordinator for cultural engagement and inclusion, said bringing awareness to others about different cultures and perspectives is important to him.

“As a part of student life for me it’s important to meet HSI goals. The work cannot fall on just one person or one organization on campus. It needs to be a collective effort between faculty, staff and students of all different backgrounds and identities,” Gonzales said.

The Dia de los Muertos altars were supported by The Center for Cultural Engagement and Inclusion, the Center for Equality and Justice, the College of Arts and Sciences, Campus Ministry, LASO and Associated Students of California Lutheran University Government.

Student Life helped advertise the event on their social media accounts and provided LASO with other resources.

“Having the resources and the staff that we have now, we don’t want like the burden of all cultural programming to fall on clubs,” Gonzales said. “We want them to carry on the traditions, but we also want to relieve clubs like LASO of some of that burden by letting them know that other entities on campus such as Student Life and Campus Ministry genuinely care about their identities.”

Madrigal said although Dia de los Muertos is typically celebrated by people of Latin American descent, the event was open to everyone who wished to celebrate and learn about the tradition.

“I feel like Dia de los Muertos itself, like although it is historically part of Mexico and such, I feel like it can be celebrated by anyone,” Madrigal said.