‘The strongest oaks have the deepest roots’ 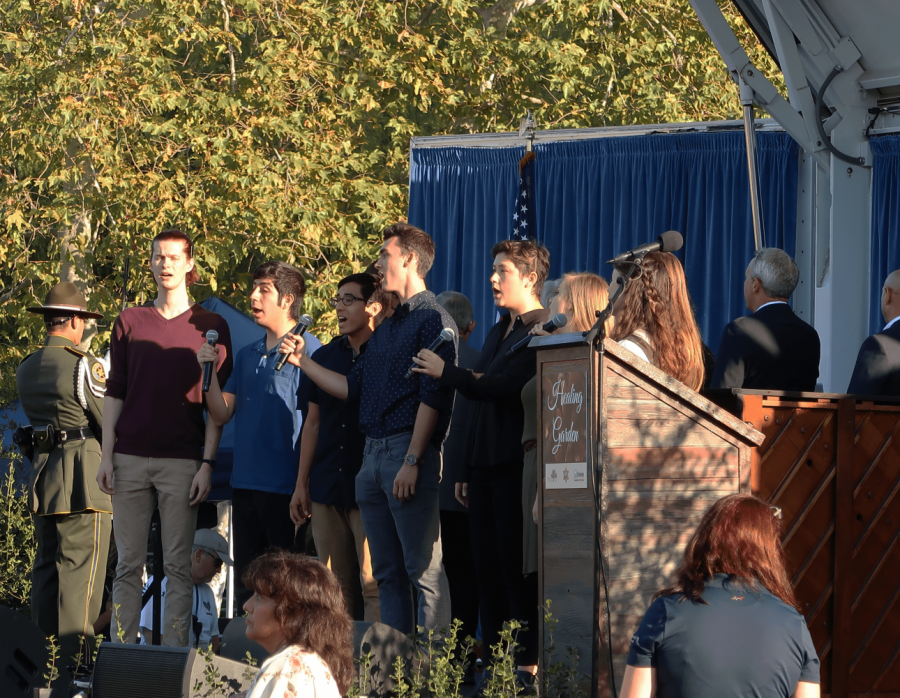 Remembering the victims: The Cal Lutheran Kingsmen and Regals Quartets sang the national anthem at the beginning of the event.

“The strongest oaks have the deepest roots,” a plaque at the entrance to the garden read. “Oaks dig deep roots during times of strife. Thousand Oaks dug deep roots during that heart-breaking November, drawing strength from community and pulling together when tragedy tried to pull it apart. ”

Located in Conejo Creek North Park, features of the garden are symbolic of the lives lost and those who survived, such as 12 fountains in the park’s upper pond and 12 granite benches. The survivors are honored with 248 uniquely colored concrete pavers found around the park. Additionally, the plaque on a large boulder introduces the garden as an “everlasting reminder to meet hate with love and darkness with light,” as well as a listing of the names of the victims.

Before the dedication ceremony began, guests had the opportunity to view the memorial garden and be with members of the community. Two private ceremonies were hosted before the garden opened to the public, one for the families of the victims and one for survivors.

Thousand Oaks resident Sue Hoffman came to show her support for the community she has lived in for more than 25 years.

“I wanted to show my respects [to] the families and the people that died,” Hoffman said. “I think it’s a terrible tragedy and I believe in ‘Thousand Oaks Strong’ and show my support.”

Besides the symbolism the park embodies, Hoffman also believes the Healing Garden is a good addition to the park.

“It’s a beautiful park, we have a dog we walk around here sometimes and we will be back,” she said. “It is a good remembrance of those who passed away.”

The ceremony was scheduled to begin at 3:15 p.m., but because of the amount of people who showed up it was postponed until 3:30 p.m. to allow everyone time to arrive. The dedication began with the Ventura County Sheriff’s Department’s honor guard presenting the American and Californian flags, followed by the California Lutheran University Kingsmen and Regals Quartets singing the national anthem.

During the event, several officials including former Mayor Andy Fox and Mayor Rob McCoy spoke. Between speeches, there were musical performances by Paige Peel, Annie Bosko and John Ondrasik.

Ventura County Patrol Chaplain Ron Matthews led the community in prayer for the lives lost and those still here.

Survivor Michaela Niedermayer said she was not yet ready to visit the garden, and is still struggling to come to terms with the events of last November.

“I feel like I would be overwhelmed going,” Niedermayer said. “I know it’ll bring back memories that I don’t think I’m ready to have. I just feel like it wouldn’t feel right. I felt guilty for a long time after questioning ‘why was it them and not me,’ what was the reason. I just can’t get back into that state of mind and I know going to visit the garden before it’s ready could trigger that for me.”

While Niedermayer did not attend the Healing Garden ceremony, she said she hopes to one day visit the garden on her own terms.

At the end of the dedication, family members of the victims read their loved one’s names from the stage. White doves were then released  into the blue sky, circling around the crowd before disappearing behind the oaks encircling the park.