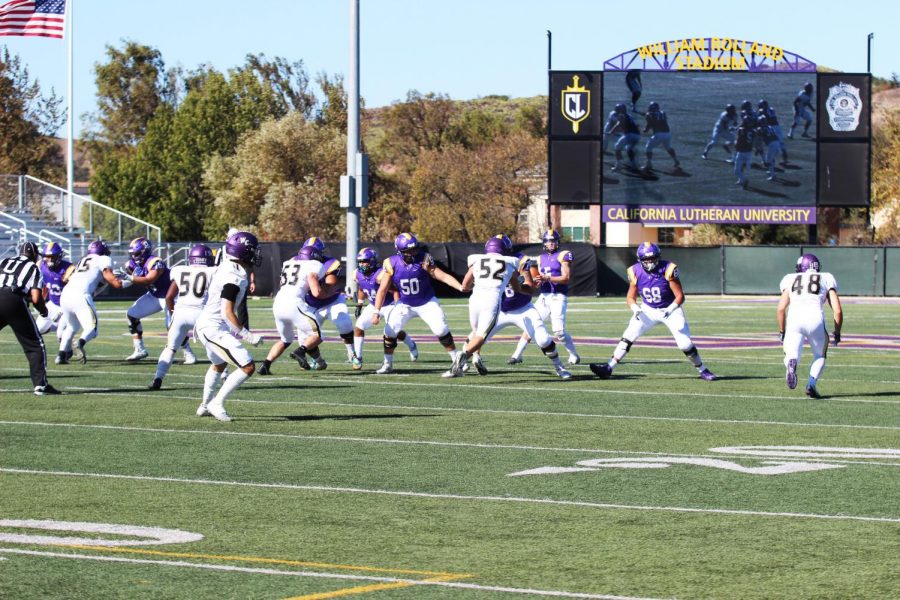 The California Lutheran University Kingsmen football team picked up a win on senior day against the Whittier Poets, 59-20.

Before the game began, the Kingsmen honored senior players. This was the last game the senior class played wearing Cal Lutheran colors.

“The biggest thing we want to do is go out with a W, especially for us seniors. It’s our last game and for a lot of us, this may be the last time we ever touch a football field again,” senior quarterback Cesar De Leon said.

Cal Lutheran got the scoring going right out of the gate. De Leon threw a 12-yard touchdown pass to junior wide receiver Jajuan Thomas in the first five minutes of the first quarter. After the extra point, the Kingsmen led the Poets, 7-0.

De Leon then came back and threw a 23-yard touchdown pass to first-year wide receiver Cameron Jones. This was Jones’ first of three touchdowns on the day  with two receiving, one punt return.

De Leon threw for 150 yards and 4 touchdowns. The Kingsmen offense had 517 total yards of offense and the defense limited the Poets to 282 total yards.

“Our goal for these past two weeks was to go 2-0 and start a streak to end the season. Now we are 2-0 heading into next season and that’s exactly where we want to be,” Jones said.

The Kingsmen rushed for a total of 358 yards. First-year full-back Reid Huseman also had 13 rushes for 70 yards and one touchdown.

“We came out and executed on the  offensive and defensive sides of the ball. We did not want to give in, did not want to stoop to their level. We wanted to set an example for the younger guys for the upcoming season. It’s just been one heck of a ride,” Jackson said.

Senior day brought on a visible sea of emotions for the Kingsmen.

“It’s tough. You know it’s tough when you have such a versatile, good guy, good quarterback like Cesar [De Leon],” Jones said.

The Kingsmen ended up sitting their starters toward the end of the game and gave the fans an opportunity to see what the Kingsmen would look like next year.

When the game was over, a wave of purple and gold was waiting outside the tunnel as the Kingsmen’s families lined up to get pictures.

With 18 Kingsmen graduating, the team has started thinking about steps for the future.

“I want to keep playing, that’s obviously the goal. I think I’m talented enough, but hopefully some opportunities come but if not, I’m more than happy with the way my career ended here,” De Leon said.