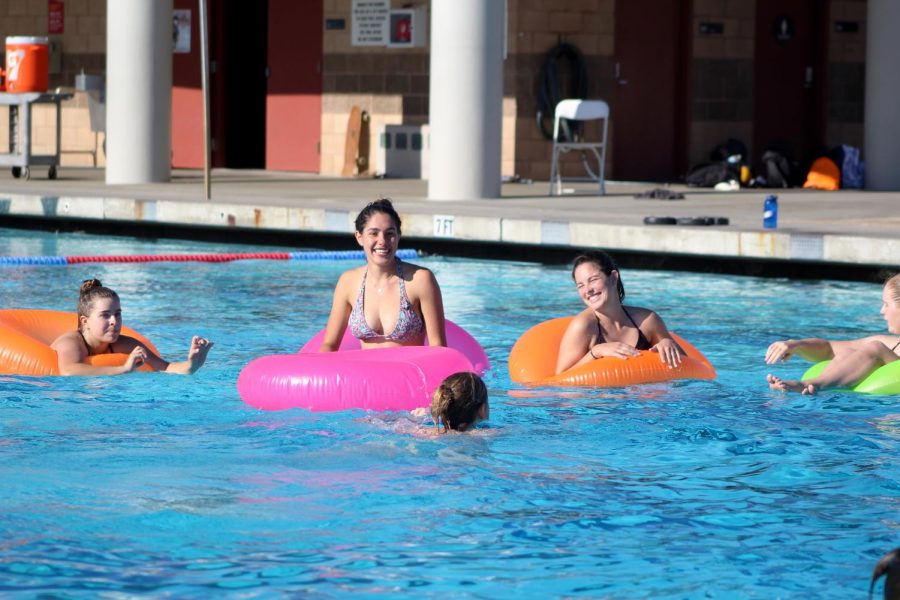 Senior Morgan Snyder (left) laughs with her team as they watch other participants get ready to shoot at intramural sport’s innertube water polo tournament.

Samuelson Aquatic Center pool was reserved from 1-6 p.m. on Nov. 16 for an innertube water polo tournament, but because of the small number of participants the event faced some obstacles.

Ryan Kolter, coordinator of Recreational Sports and Wellness, said in an email statement the event was “a little post-summer splash before the weather gets too cold in the winter months” and hoped “lots of students [came] out.”

“Obviously I think you always hope for more people at events,” May said. “I definitely would have liked to at least have another game or so but I’m happy we were even able to get enough to play this one game.”

May said the idea for this event came from Kolter. She said she researched how the sport was played at other colleges and took rules from Brigham Young University and University of California, Santa Cruz and combined them in a way she “thought was best for Cal Lu’s culture.”

The main difference was the use of innertubes. All students had to sit in their innertube, and if they fell out of their tube while shooting a goal, the goal wouldn’t count. Students could also flip over students in possession of the ball.

Cameron Mendez, another outdoor recreation intern for Student Life, said she came to the event expecting to referee or simply watch the game. Mendez came in a bathing suit and ended up jumping into the game to even out the teams.

“I tried my best,” Mendez said. “I had so much fun. I think I was focusing more on the excitement and the fun aspect than actual skill.”

Mendez said it was a good distraction from “midterm season” and thinks more students should take advantage of these opportunities.

Senior Morgan Snyder has roommates who play water polo, so she decided to try the sport.

“I’ll probably drown if I’m not in an innertube, so it sounded like a fun idea to come out,” Snyder said. “I would definitely do it again.”

Snyder said she was surprised with herself because she “played better than expected.” However, she wished more people had come so the teams wouldn’t have had to be reorganized.

Senior Laura Brasil, one of Snyder’s roommates, said it was really hard to stay on the tube during the game, but she felt her team did well.

“I actually didn’t learn how to swim until the fifth grade,” Brasil said. “My best friend taught me in her backyard.”

Sophomore Riley Mitchell on the other hand, had some swim experience from high school. However, he said he didn’t expect his team to win.

“I could kinda like kick and swim faster but I couldn’t throw the ball that well, so it didn’t matter that much,” Mitchell said.