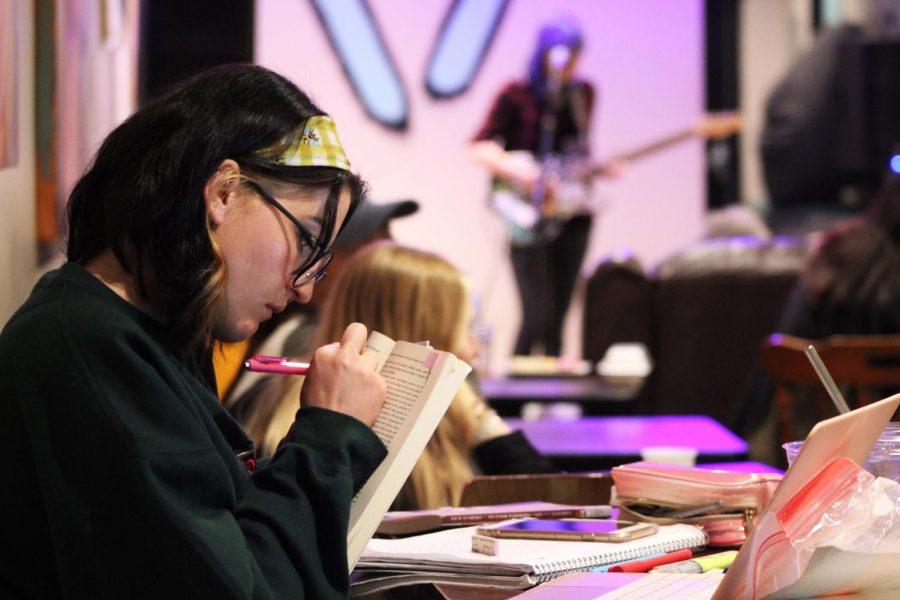 Gretchen Freihon, studying during open mic night at Five07, said she doesn’t mind the music while doing her work and actually enjoys the background noise.

Within the four walls of Five07 Coffee Bar and Eatery, anyone can find something to fit their tastes. There’s local art, board games, colored lights and— of course —coffee. However, it’s Five07’s music that completes the atmosphere of the cafe.

Owner Sean McCarthy, who runs Five07 with his wife Amber McCarthy, said they work to create a welcoming environment in the eatery. Both being California Lutheran University alumni, Sean McCarthy said he wanted to create a “community space that was open past 8 p.m.” since there aren’t many options in the area.

Carefully curated playlists, sought out artists and a welcoming space for “Open Mic Nights” help elevate the eatery to something more than a place for coffee.

Nicknamed the “vibes master,” Sean McCarthy said he is in charge of the Spotify playlists and making sure the music “flows” with the atmosphere of the people in the cafe.

“One of our biggest inspirations for opening the shop in the first place was a place for local musicians to play,” Sean McCarthy said. “Sort of like a middle ground between backyard house shows and the Roxy in LA.”

Five07 gives growing artists  a platform to share their voice. Recently, the eatery has opened up the space to be more of a venue by pulling out couches and taking out some tables.

“There was like a borderline mosh pit two weeks ago,” Sean McCarthy said. “It was like this is a coffee shop in Thousand Oaks, this is kinda sick.”

“It’s really cool seeing the fluctuation of the energy and the vibes depending on who the artist is, and how the community and the space molds to who’s in it,” Sean McCarthy said. “It’s very much a fluid energy.”

Saturday, Dec. 7 was an open mic night combined with an LGBTQ fundraiser. Some of the artists were part of the LGBTQ community, while others just signed up to share their message.

One of the performers, Coraline Francis, shared some original songs, one of which she admitted on stage she had just written the night before. Francis said she was nervous about sharing her songs but had “so much fun.”

“[Five07] gives me a chance to perform and get my music out there because it’s really hard as an artist to find places to perform,” Francis said. “This is like a really good environment.

There’s a lot of cool people here that are open-minded and awesome.”

“It’s really cool to have something in the area that’s so artistic and awesome and open,” Francis said.

Despite it being open mic night, some people still went  to Five07 to study or work while enjoying the live music. Gretchen Freihon, a junior at California State University, Channel Islands, said she can work through the live music and enjoys going to a place where she feels comfortable despite how busy it can get.

“It’s interesting to have a work atmosphere as well as a hang out atmosphere,” Freihon said.

Freihon thinks open mic night is a way to “experience the people around you,” and a way to “share a moment with [the artist] regardless of whether you know them in person.”

On this particular open mic night, employee Mia Perez was up on stage announcing the line up. The night featured guitarists, rappers and even a violinist and pianist playing Christmas songs.

“There are so many different people that come in and you never know what you’re getting into,” Perez said. “One night we just had one guy come in and tell stories about their life.”

Five07’s open mic night is a platform for people to come in and share their creativity. The eatery itself is constantly filled with a diverse group of people and forms of art.

“It’s just very rewarding to be in the community, and a space within the community that people are able to come together and feel like they can express themselves,” Perez said.