‘Bow’ down to the violinist 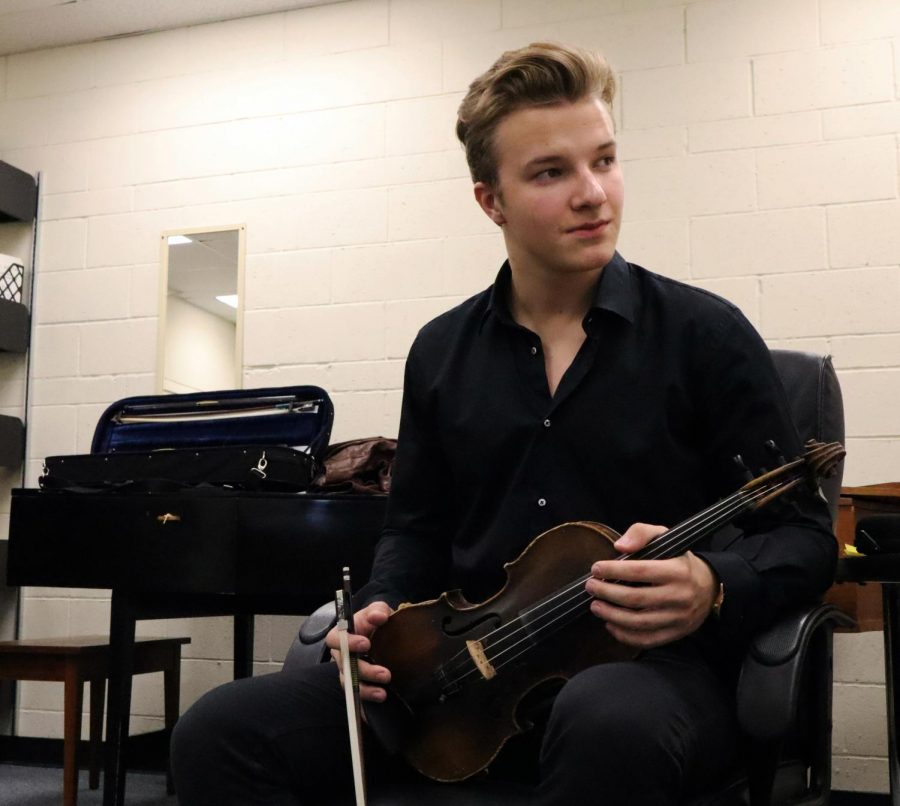 Tabala said his violin is at least 100 years old and was an award for winning an audition in Russia. Tabala is in his first semester at Cal Lutheran and the principal violin of the orchestra.

First-year student Dmitrii Tabala, 18, arrived in the U.S. four and a half years ago from Russia with great musical ambitions. He began high school in America at Idyllwild Arts Academy, a private institution known for specializing in performing arts. Tabala said he has been playing violin since he was 3 and piano since he was 5.

Tabala said his first experience hearing the violin took place when he was an infant. It was the sound of his older sister playing the instrument at one of her lessons that ignited a passion for music in him, Tabala said.

In Russia, Tabala was professionally practicing both piano and violin in prestigious musical institutions, but had to dedicate himself to only one instrument when entering school in the U.S.

“I take it [music] very seriously. I come from very tense schools that were music-oriented and I was always trained hardcore,” Tabala said. “I was locked in practice rooms for hours until my work was perfect.”

One of Tabala’s professors, Yoshika Masuda, assistant professor of music at California Lutheran University, said Tabala is an extraordinary violinist. Although Masuda specializes in cello, Masuda said he acts like a mentor to Tabala.

When Tabala arrived at Cal Lutheran he attended auditions for a Visual and Performing Arts Scholarship where he was a standout, Masuda said. VAPA is a scholarship awarded to students at Cal Lutheran who demonstrate superior levels in music, theatre arts or visual arts.

“He [Tabala] sort of plays at a level that Cal Lu hasn’t really seen before, kind of unprecedented,” Masuda said. “Everyone was blown away really at the [VAPA] audition.”

Although Tabala has received acclaim from his professors, Tabala said his success in the U.S. has come with some downsides.

Tabala said it is Russian culture for people to not be afraid of speaking honestly about other people. This sincere honesty is something Tabala misses. Another aspect of Russia Tabala misses is his family life, especially his parents. Tabala said his parents brought him to the U.S. as a way for him to mature and counted on him to overcome personal adversities.

“I was all by myself. I had to support myself financially, morally and socially,” Tabala said. “I understand that leaving me was very hard for [my parents], but they took it as the way for me to grow up faster.”

Masuda said he believes it is his duty to better prepare Tabala in his musical career, but also help him establish his identity in a new country.

Both Cha and Masuda said becoming a soloist is an immensely ambitious career to strive for. However, Cha said that has not deterred Tabala from his goals.

“If you are not very gifted or a prodigy it is very competitive to be a soloist,” Cha said. “If this was the last piece of advice I could tell Dmitrii, it is to perform more for people and continue to work hard.”

Masuda said he knows of Tabala’s desire to be a professional violinist, but also understands that careers as solo musicians are declining at fast rates.

“A lot of people play [instruments], and a lot of people play their instruments very well, but the jobs are getting scarcer and scarcer,” Masuda said. “So only the best will have a chance… It is important to always strive to never be content because otherwise at some point someone better will come up.”

Tabala said  he is not afraid that becoming a solo violinist may be a difficult career to achieve, but rather frets about how long the process will take.

“I know that getting an office job is much easier, but I’m not here for the easy way,” Tabala said.