‘Let it Snow’ in the rain 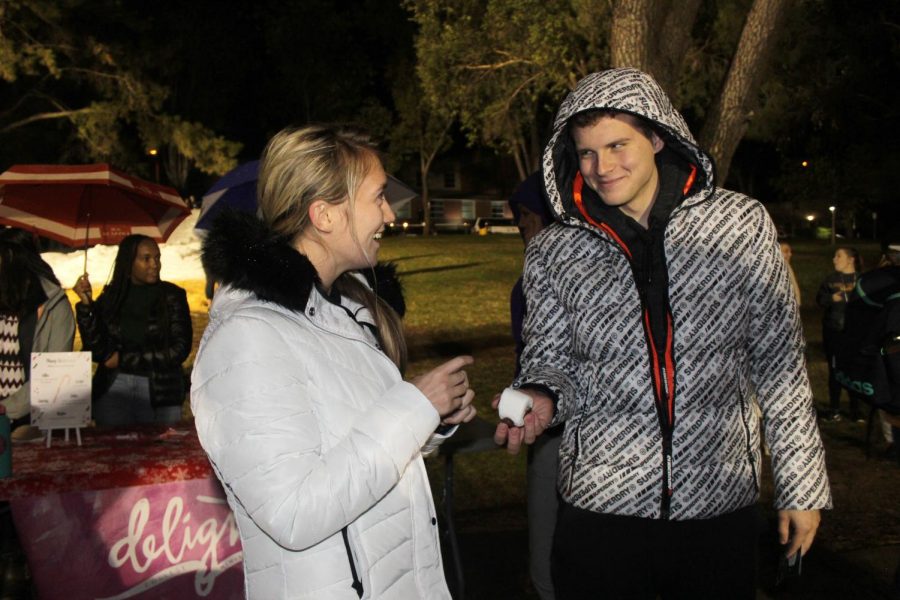 On the rainy night of Friday, Dec. 6, Kingsmen Park was transformed into the snowy celebration of “Let it Snow” for the California Lutheran University community to participate in.

“I’m really impressed because I was worried about the rain, but there are still so many people here. Everyone is still just lasting through the rain,” President of Lord of Life David Hall said.

Let It Snow was planned and coordinated by senior Thomas Little, an Associated Students of California Lutheran University senior representative on Programs Board.

As in previous years, students were able to take photos with Santa Claus and Mrs. Claus in the gazebo and a sled hill made of artifical snow returned for another appearance. New this year was an inflatable snow globe attendees could go inside and take photos in.

“We wanted to be more inclusive and have other photo opportunities than just Santa,” Little said.

Programs Board Senior Representative Kerstin Westerlund dressed up as Disney’s Elsa for the event.

“Since Frozen 2 is just coming out, it is like the perfect time for Elsa,” Westerlund said.

Religious clubs tabled at the event with activities to inform attendees how they celebrate the holidays. Delight Cal Lutheran, Hillel, Latin American Student Organization and Lord of Life were all present at the event.

“They asked some of the faith-based clubs to table, so just representing what this means for us. We are just getting in the Christmas spirit and asking what the birth of Jesus means to them,” Hall said.

Attendees were able to enjoy vegan cinnamon rolls provided by Cinnaholic Bakery as well as gluten free and vegan brownies from Lemonade.

“I knew I wanted to do cinnamon rolls because they would go really well with the hot drinks Kona was serving,” Little said.

Hot drinks were served by a Kona Ice foodtruck including hot chocolate, coffee and tea.

At the event, people sang and danced to karaoke provided by iCLU radio. Performances planned by the dance team were canceled because of the rain.

However, the rain didn’t stop students and the community from having a good time.

“Besides the rain, I think everything is going really well,” senior Phoebe Leon said.

The budget for Let It Snow was $16,000, and approximately $13,000 was spent. Next semester there will be a meeting to go over exact amounts spent on the event.