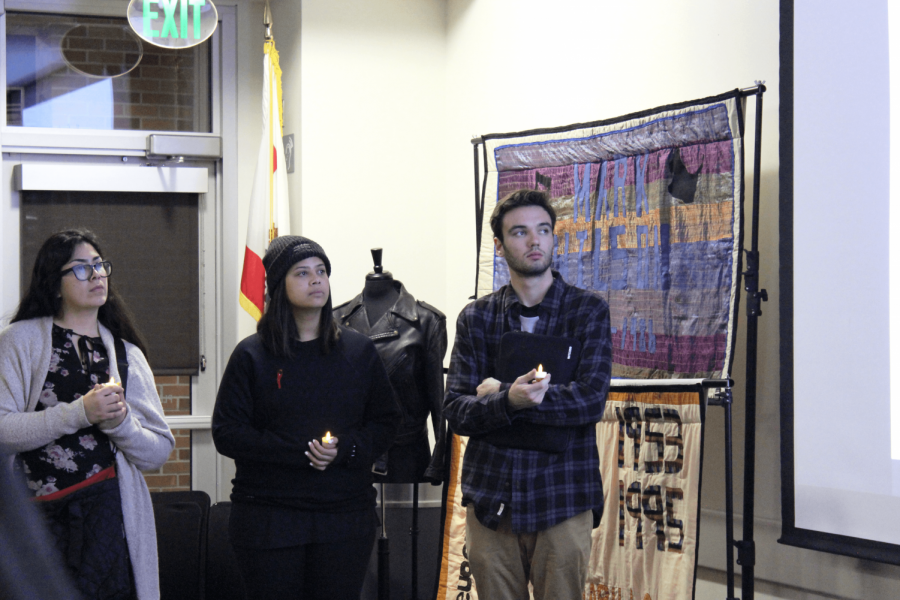 The event began at 4:30 p.m. with HIV and AIDS information shared, such as how the disease is spread, possible treatments and the rise in diagnoses locally and nationally.

The second portion of the series focused on guest speaker Neil Coffman-Grey, public policy coordinator for the HIV Coalition of Ventura County and a member of The NAMES Project Foundation. Coffman-Grey’s husband Keith Grey was present too, to share his experiences and talk about losing someone to AIDS.

“There’s still so much about this that hasn’t changed besides the symptoms. There’s still the stigma and the shame and the fear, for I think a lot of people, that they are gonna lose their sex life,” Coffman-Grey said.  “They don’t want to come out about it because they want the human connection… I understand the hesitancy, it’s a very difficult thing.”

Coffman-Grey also discussed the AIDS Memorial Quilt. This project was conceived by Cleve Jones during a candlelight memorial in 1985 to commemorate the lives of San Francisco Supervisor Harvey Milk and Mayor George Moscone after their assassination in 1978.

Mark Langer, a member of the NAMES Project, said the quilt project helped him reflect on a friend he lost who died from AIDS. Langer said he has read about the project, and saw it displayed at the National Mall in Washington, D. C.

“I can’t advocate for drug prices and stuff like that, but I can do something to show people the enormity of this disease,” Langer said.

“I mean there is never a perfect solution you know, the world keeps turning, we keep populating, you’re never done doing the work,” Aldana said.

The final portion of the series invited individuals to participate in a candlelight vigil, put together by Associate Professor of Religion Colleen Windham-Hughes and her students.

Director of the Sarah W. Heath Center for Equality and Justice and Sociology Professor Cynthia Duarte attended the candlelight vigil, and said these events are important to the Cal Lutheran community. Duarte said she has also lost people to AIDS.

“This is a day to honor them and think about them and sort of remembering the sadness I felt when they weren’t around for me anymore,” Duarte said. “As a child, you assume that the people in your life are going to be with you and they love you and so to have to experience that kind of death as a young girl… Being here and remember them and saying their names in my head I think is a really beautiful, powerful thing to do.”

Duarte said it is important to educate all students at Cal Lutheran on HIV and AIDS.

“We really need to educate, because AIDS is not gone. It doesn’t seem to be going anywhere soon,” Duarte said. “We want to make sure you guys live a safe and healthy and happy sexual life and hopefully this event will make that happen.”