Singing in the holiday season with Cal Lutheran’s Choirs 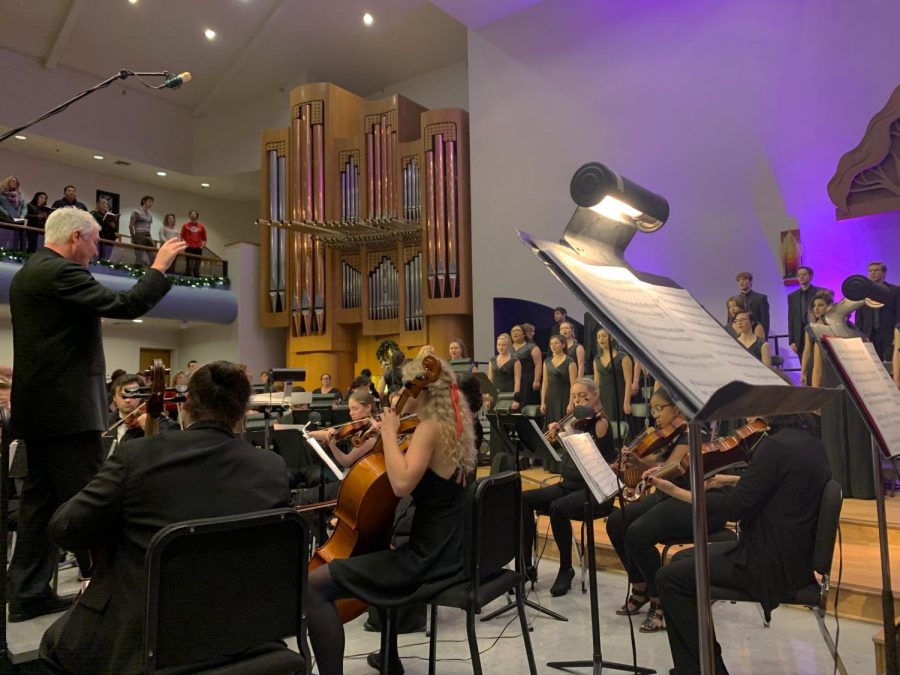 The theme of this year’s Christmas concerts was “Let All The Nations be Gathered Together.” Wyant Morton, a professor of music and director of choral activities, said the theme was intended to represent a variety of Christmas music from other countries and cultures.

“It was just the idea that Christmas isn’t just one thing to one person or one group of people. There’s lots of different expressions of it. So, we have some narrations that kind of tie that idea in,” Morton said.

The concerts featured an array of culturally diverse Christmas songs such as “Pasko Na Naman,” a traditional Filipino Christmas song. The concert also featured Christmas classics such as “You’re A Mean One Mr. Grinch,” performed by the Kingsmen Quartet.

“The goal of the concert is always also to involve the audience in singing familiar carols, you know that are a part of our tradition. So, it’s kind of a mix between sort of having that global perspective, but also celebrating our own traditions,” Morton said.

The Christmas Festival Concerts offered three public events for people to attend. Morton said tickets were made available to the public via an online ticketing system.

“Because of the popularity of these Christmas concerts, a couple years ago we moved to a ticketing system,” Morton said. “So, for years people just came and we tried to put up chairs and we always had this overflow.”

Morton said preparation for the Christmas concerts has been taking place since after homecoming in October.

“We’ve been rehearsing for about seven weeks to learn this music and to memorize the music,” Morton said.

Nissa Rolf, senior and choir club president, said there had been a regular rehearsal time set in place in order to prepare for the event. Rolf also said the concerts are memorized for the most part, so outside practice is necessary.

Xavier Reynoso, sophomore and first tenor on the Kingsmen Quartet, said he also thinks outside rehearsal is an important part of the preparation process.

“We rehearse on our own outside of choir like as a group and then just like individually too,” Reynoso said.

Morton said a sizable amount of people were involved in the production.

“In this concert there’s a lot of logistics also because it involves the CLU Choir, the women’s chorale, the university symphony, and we have a lot of people that are running the lighting and this kind of PowerPoint. So it’s more theatrical and involves a lot of coordination between a lot of different groups and certain people,” Morton said.

The entirety of the production got together on multiple occasions to have a collaborative rehearsal, Rolf said.

The annual Christmas Festival Concerts are free to all Cal Lutheran students, faculty and staff. The concert, which sold out for Sunday’s showing, took an immense amount of hard work to put on, Morton said.

“I think every year it’s just fun to see all the hard work of all these different groups of people,” Morton said.