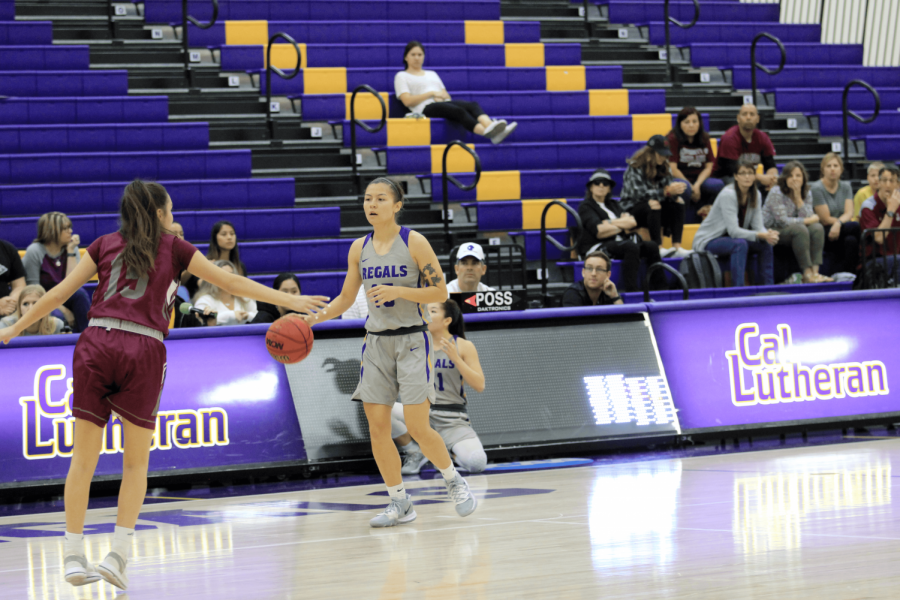 Junior guard Taylor Oshiro scored seven points for the Regals as they faced the Redlands Bulldogs.

The California Lutheran University Regals basketball team handed the Bulldogs their first defeat of the season on Saturday at Gilbert Arena.

The Regals broke their three-game losing streak beating the No. 1 ranked and only undefeated team in the Southern California Intercollegiate Athletic Conference 71-54.

“It feels really good. We really worked hard on defense, and Redlands is a very solid team,” Head Coach Kelli DiMuro said. “They do a lot of good things and we just came out and wanted to kind of make up for our loss at CMS because we lost pretty badly.”

The Regals got a quick jump on Redlands and led 23-8 at the end of the first quarter. At the start of the second half, the Regals led 39-19, but the Bulldogs began to close the gap.

“Defensively we just tried to stop them on their penetrating kick, we kind of took the post player off and sat her in the key instead of kind of denying out,” DiMuro said. “In the second half, we wanted our defense to be better.”

The Regals pulled ahead in the final quarter and were able to get back the lead to finish out the game. Cal Lutheran shot 45% from the field and 23% from 3-point range. Redlands shot just 32% from the field.

The Regals’ junior guard Jozie Tangeman was the leading scorer with 19 points, and sophomore guard Mackenzy Iwahashi had 14 points and four assists. This is Tangeman’s ninth straight game of scoring double digits for the Regals.

“Just having an aggressive mentality. Drive and kicks are open so just my teammates finding me on every play, so it’s good,” Tangeman said.

Sophomore guard Haley Tyrell grabbed eight rebounds and dropped in 10 points, playing an important role in the victory, especially on the defensive end.

This was the Regals’ first win against the Bulldogs since the 2017-18 season, falling to them earlier this season and in both matchups last season.

As for the rest of the season and making the SCIAC tournament, Tyrell said, “I mean, anyone can win any game and I think we’re just coming in thinking we are going to win those next five games. We want to be in the tournament, so just keep working together and finishing out strong.”

With only five games left to qualify for the SCIAC tournament, DiMuro is optimistic and ready to work the team hard, but also ensure that they have fun in the process.

“We’re going to come into these next games with the same kind of effort and love and fun. We want them to have a love for the game, we want to focus on that and finish the season strong,” DiMuro said.

The Regals look to start a winning streak as they face Chapman University at home at 7 p.m. on Wednesday, Feb. 5.