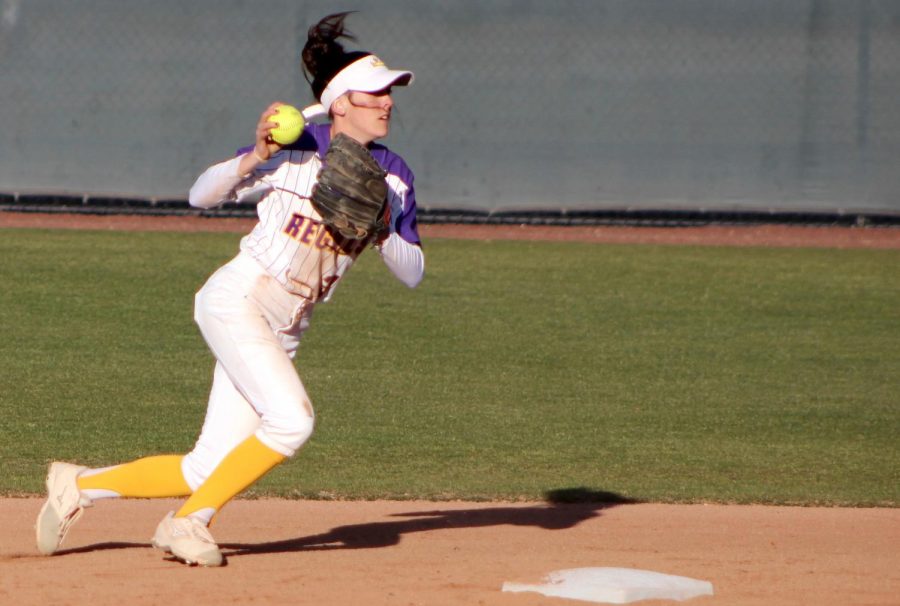 Junior shortstop Natalie Winokur ready to clear the bases with a double to tie the score.

Regals softball had their first home games of the season in a double-header against the University of Antelope Valley Pioneers on Feb. 5.
The first game of the day was a 9-5 win for the Regals.
“The first game is who we are and who we want to be this season,” senior catcher Lexie Findley said.
The Regals came off of a win at the University of Antelope Valley on Tuesday, Jan. 28.
“I was really excited to get out here and show them what we can do again,” junior pitcher Meghan Henry said.
In the first game the Regals and Pioneers were tied with one run and no score in the second inning. Henry came in for sophomore pitcher Sienna Perez in the top of the third inning to shut down the Pioneers hitting streak.
“Today we were working well together, especially me and Meghan [Henry], and just seeing the ball,” Findley said.
The Regals were down 5-1 at the bottom of the third inning. First-year infielder Natalie Luna started off the Regals with a single into right and senior, Kendall Marinesi followed her with a walk. By the end of the third inning the Regals caught up, tying the game 5-5.
“Today felt really good, it was just one of the first real games back on our field and having a great team behind me always helps,” Henry said.
Throughout the rest of the game Henry only allowed 5 hits and no runs.
“We felt good coming into all the games—we played really well, had good pitching and had good hitting in the first game,” Head Coach Debby Day said.
In the second game of the day, the first inning started at 0-0 but into the top of the second inning the Pioneers took a 5-0 lead.
“There was a really big change in how everyone approached the game. So the first one we were excited and the second one we kind of just expected to win again and didn’t have that fire we usually have,” Henry said.
Offensively, in the bottom of the third inning the Regals could not keep up with the Pioneers and entered the third inning with no score on the board.
By the top of the third inning the Pioneers had a 10-0 lead and the Regals were struggling to catch up.
“We didn’t bounce right back and be ready to go in the second game and it showed,” Day said.
In the fifth and final inning the Regals scored two runs but were unable to continue to seven innings.
“It took us a little while to get back into it and really see the ball well, until the last inning,” Findley said.
The second game ended with a score of 10-2. The Regals finished the day with one win and one loss.
“The first game really dictates what we are going to be this season and we are kind of working out the kinks of trying to not be like the second game,” Henry said.