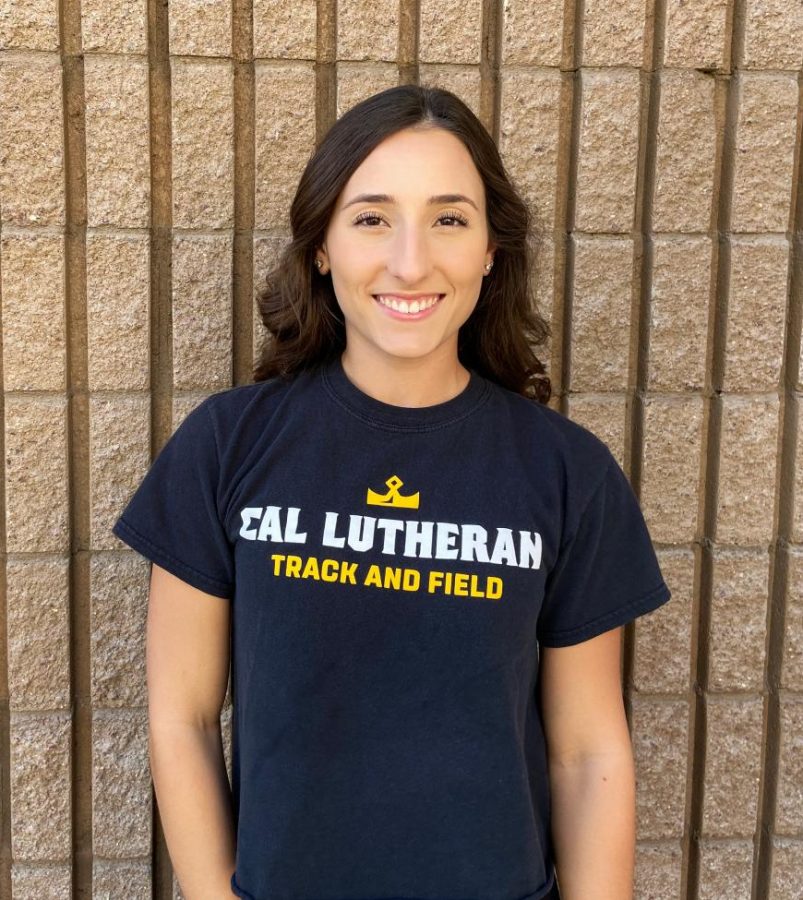 When senior Kendall Guidetti first arrived at California Lutheran University, her achievements and impact on the track and field team were immense and immediate.
Guidetti was the only qualifier for the National Championships from Cal Lutheran in her first year, and since then she has been a Southern California Intercollegiate Athletic Conference champion and again a national qualifier in the long jump. Currently, she is a top 10 long jumper in the nation.
On top of her athletic accomplishments, Guidetti is a three-time inductee into the Cal Lutheran Scholar-Athlete Society. These achievements are just part of the reason why Guidetti regards her last four years at Cal Lutheran, especially on the track team, so highly.
“I’ve had the greatest experience on the track team. I think that’s the best part of my experience in college. I have so many good friends because of the track team,” Guidetti said.
Guidetti began her athletic career as a 5-year-old soccer player and learned of her outstanding speed during her time playing the sport. It wasn’t until her sophomore year of high school that she joined her school’s track and field team and discovered the great passion she had for it.
“Everyone would tell me how fast I was on the soccer field, so finally after a lot of convincing from people, I decided to join the team and I never looked back,” Guidetti said.
As she started to get better and faster, Matthew Lea, head coach of the men’s and women’s track and field team at Cal Lutheran, had Guidetti on his radar during her time at Oak Park High School and soon, began recruiting her to come to Cal Lutheran.
“I saw a lot in her, she was one of the top long jumpers in the state in her senior year, and even her junior year. So, you knew that she had a lot of talent in the way that she carried herself,” Lea said.
Guidetti competes in the 100-meter dash, the 4×100 meter relay, and her favorite, the long jump.
“It’s a lot harder because it’s so much thinking, and you have to sit around and kind of just watch people jump and try to do better than them,” Guidetti said. “I like that it’s challenging in the sense that you have to get out of your own head and just try to compete to the fullest.”
When Coach Lea recruited her, he was enthusiastic about the possibilities for her as an individual, and believed in her ability to boost the team as a whole as well.
“She had a lot of things going for her, and a lot of things that I feel like she could work on as well. Her speed–I mean, she was already pretty fast, but I knew she could get faster,” Lea said. “You knew that she had the great work ethic and that she wanted to get better.”
Guidetti continues to prove she can get better each year, earning her third consecutive conference long jump title and recording the program record of 5.85 meters at the Redlands Final Qualifier during her junior season.
As a marketing communication major with a sports management minor, Guidetti has a part-time marketing job with the Rams and hopes to continue and become full-time with the organization after graduation.
As for the rest of her athletic career at Cal Lutheran, Lea is confident that she will continue to shine.
“I think that she’s going to be an All-American this year and arguably, have a chance to win a national title in the long jump this year,” Lea said.