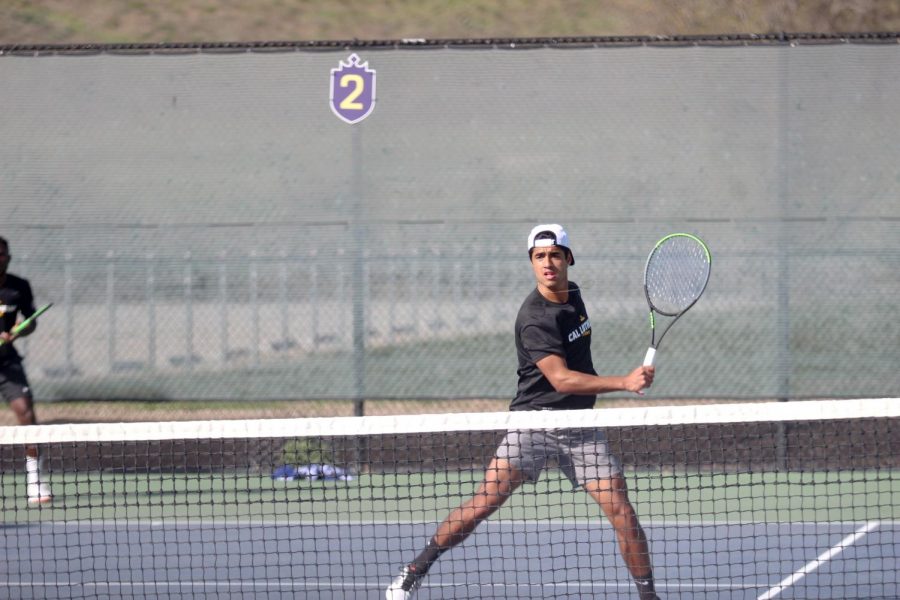 First-year Charlie Spina prepares to stop a short ball hit near the net against Marymount.

In their first game of the season the California Lutheran University Kingsmen tennis team took the overall win against Marymount California University on Wednesday, Feb. 5.
Despite being unfamiliar with their opponent, the Kingsmen handled their nerves and came out on top.
“We have not played them before, I think it’s a new program. Based on what I’m seeing right now they have strong players,” senior Sebastian Ariza said while warming up for his singles match.
The Kingsmen came out strong winning all three doubles matches and six singles matches.
Junior captain Isaiah Volk and senior Jake Haffner won their match with a close 8-7. Junior transfer Darvel Lossangoye and first-year Charlie Spina beat out their competition 8-4. Sophomore Ryan Murphy and first-year Sean Yaghoubi took an 8-1 win over Marymount.
“Usually when you’re trying to close out a game, you get too excited and you tend to rush and I think that’s the mistake that we committed,” Lossangoye said after winning his doubles match.
The team only started their regular season practices Monday, Feb. 3, just two days before the match-up. But the Kingsmen were far from ill-prepared.
“I had a very productive offseason, so I think that helped my conditioning for the match,” Volk said.
Players regularly visited the Cal Lutheran tennis courts to get some serves in and practice their backhands along with their game faces.
Although Wednesday’s match-up was a win, the team made some errors that can be fixed with practice.
“We could have played better but it was the first match of the season and that’s always the toughest mentally. We will have to get the drawing board to see how we can improve,” Volk said.
What the team lacked in time-spent-practicing, they gained in experience.
“We’re an experienced team,” Ariza said.
With only four first-years on the team, most of the players have had collegiate-level tennis experience. Even those that do not have that higher-level experience, gave it their all and played hard.
“I think it’s a good partnership and we communicate well, and we get along well, so it’s going to be possible,” Lossangoye said about his doubles partner Spina.
Although Lossangoye is two grade-levels above Spina, he sees no shortage of heart and skill in him.
“Playing singles can get a little more nerve-racking because you don’t depend on the other person like you do in doubles, where if you make a mistake the other person can fix it for you, in singles it’s just you,” Ariza said.
Players who won their singles matches and partners who won their doubles matches are both responsible for the team’s win.
Last year the Kingsmen had an overall record of 13-7 and finished fifth in the Southern California Intercollegiate Athletic Conference.
“One of our goals this season is to make it to the SCIAC tournament and be a tough opponent,” Ariza said. “CalTech is our rival, and we would love to see a win there.”