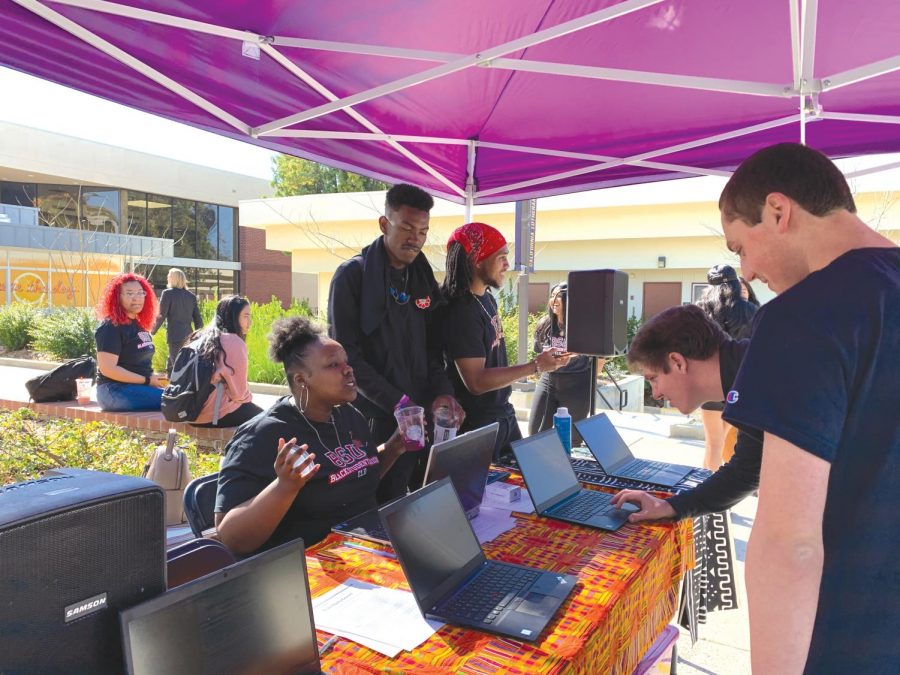 “I don’t want to go home and have people ask: you go to Cal Lu—isn’t that the racist school,” sophomore Mason Brown said. “I am just here to get a degree and having all this is a distraction, it’s just awkward. This is a very different feeling on our campus right now.”

On Friday, BSU and Sisters’ Circle gathered by the flagpoles at the center of campus, playing music, sharing their concerns on the microphones and asking students to take a “How Racist Are You?” survey.

The survey asked students questions about their inherent prejudice, including “have you ever asked a black person to touch or feel their hair,” and “would you be comfortable reprimanding a family member for the use of hate speech?”

The results of the survey were shared during a meeting between BSU leadership and President Chris Kimball to address how to improve the racial climate on campus, on Friday afternoon.

“I think the test is going to be the extent to which we implement those things [suggested in the meeting] and have a positive impact on it,” Kimball said. “This includes calling out people when they do things which are not acceptable.”

Kimball said a video including a screen recording of a Snapchat in which a Cal Lutheran student-athlete says “nah N—,” and Instagram posts including members of a Cal Lutheran sports team in what he said appeared to be blackface all surfaced last week.

“You told the entire school we did blackface and we didn’t,” a student-athlete from the accused team told Kimball in a meeting Saturday, Feb. 8. “Now the entire school thinks we did and now everyone hates us. I would hate us too if we did do that.”

In his email addressing students, faculty and staff at Cal Lutheran, Kimball said “two racist incidents…occurred in the last week,” adding “blackface and the N-word evoke white supremacy, anti-blackness and remind us that a violent, racist past is still with us today.”

While many students have seen the viral video of the student-athlete who said “nah N—,” the social media posts involving alleged blackface are still under investigation, Kimball said.

Another student-athlete at the meeting on Saturday said it was “backward” for Kimball to send an email addressing the entire school prior to conducting a formal investigation.

In the meeting Kimball said his investigation process was “asking what happened.”

When a parent at the meeting asked Kimball what he saw in the images in question he said “I’ve seen a number of photographs and some video and I would say the answer was that [I saw] this was sort of male beard stubble.”

The team alleged of using blackface has hired attorney Michael J. Saltz with Jacobson, Russell, Saltz, Nassim and De La Torre LLP to bring litigation against Kimball and the university.

“It appears in doing what he did, President Kimball unnecessarily fanned the flames of racism, which in turn pitted Cal Lutheran students against one another who would otherwise be natural allies in the fight against racism, sexism, and bigotry in all its forms,” Saltz said.

According to Saltz, no one involved with the team engaged in any activity wherein anyone was in blackface.

Brown and Kimball both said the issue of racism on campus is not a new concern.

“The more general [question] there is, is what can we do to make the campus climate more equal and more equitable,” Kimball said. “And that’s obviously a long-standing issue.”

Brown cited other racist incidents dating back to his freshman year, including a video in which his acquaintance is seen standing on a table and “saying the n-word.” Brown added, “I was actually kind of cordial with her on campus, but ever since [seeing the video] I have looked at her different—like okay you said it, but why did you not come and talk to me and say you didn’t mean it.”

In an email forwarded to the Echo from a representative for the team alleged of using blackface sent at 12:18 p.m. Feb. 10, Deputy Title IX Coordinator Chris Paul, said “based on our review of this situation, we have determined that there will be no individual student conduct process related to the performances.”

At the least, Kimball said Cal Lutheran athletes will be provided with additional discrimination training in the future.

After Kimball leaves the Office of the President at the end of the semester, “hopefully [the racial climate] will be better,” Kimball said. “Obviously I have to take responsibility for not getting us far enough along on that road.”

According to the Campus Diversity Initiative page on the university website, “the Diversity Plan for California Lutheran University follows a Continuous Improvement Model utilizing Key Indicators of our progress.”

In efforts to diversify, Cal Lutheran made its Hispanic Serving Institution status central to it’s identification, but Kimball said that may have unintentionally excluded other groups.

BSU’s press release on Friday said, “we have done the work. Now it is time for California Lutheran University to do theirs.”

The Echo respects BSU leadership’s decline to comment at this time.

“I want people to know that on behalf of all the African American students—yes, we’re angry, but we just want to share that we’re all created the same,” Brown said. “We all bleed the same color.”

An earlier version of this article included a paraphrase of the email sent from Chris Paul to the team alleged of doing blackface, the Echo has added the full quote for additional clarity. This quote is directly from an email that Paul sent on Feb. 10 at 12:18 p.m. to members of the team formerly under investigation.