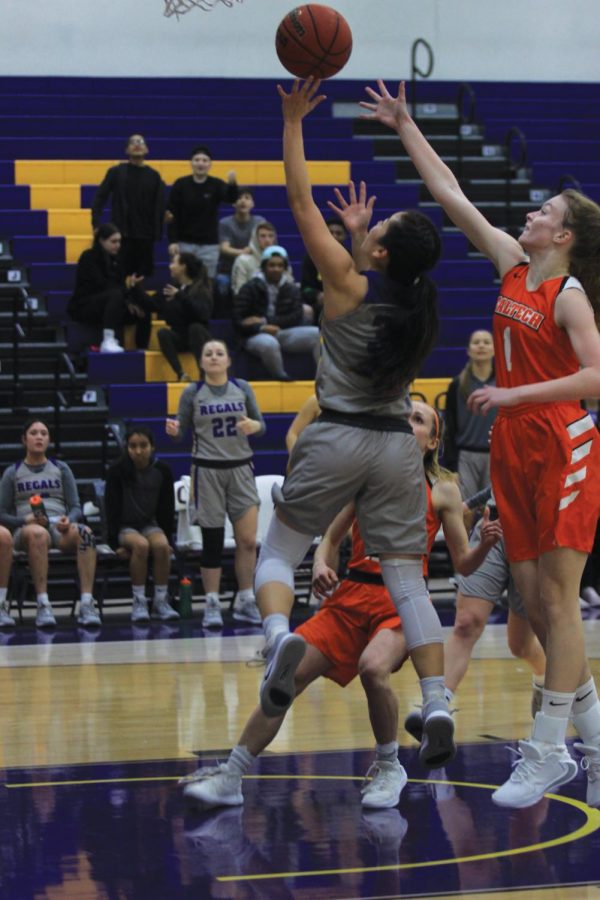 Sophomore guard Mackenzy Iwashi drives at the basket to help the Regals lead over Cal Tech.

The California Lutheran University Regals basketball team concluded their final regular season game against the California Institute of Technology Beavers on Wednesday, Feb. 19 at Gilbert Arena in a double-digit victory, 101-45.
The team shot 54.9% from the field, compared to the Beavers who only shot 25.8% from the field.
On top of having an efficient shooting night, the Regals forced 15 turnovers and recorded 10 steals.
“They’re [Cal Tech] a really strong team. They were missing two or three of their players and so they were kind of down. One girl sprained her ankle the game before so, it was a lot different in that respect,” Head Coach Kelli DiMuro said.
DiMuro also said that there was a “comradery” coming from the team because it was senior night.
“It brought a definite magic to the game, so I think that helped us come out strong and stay focused,” DiMuro said.
The team had 76.9% of their baskets assisted, 30 assists in total, compared to the previous matchup against Cal Tech where the team only had 62.5% of their baskets assisted with 15 assists in total.
“Last time we played Cal Tech we kinda got stuck on trying to get it done, but this one was not individually. It was using every single person on our team,” senior forward Karly Beyers said.
Prior to the game, the Cal Lutheran Regals basketball team honored their two graduating seniors, Beyers and guard Natalie Ruhl, who appeared in their final basketball game as Regals in the annual Senior Night game.
Beyers’ 24-point game highlighted the night and her career as a Regal reaching her career-high in points. Not only was 24 significant because it was a career-high number, but it was also the number of Beyers’ mentor, Kobe Bryant.
“That’s my mentor, that’s my idol, so I couldn’t have asked for a better outcome. When I heard that, that brought tears to my eyes because I don’t know if that was him there helping me or not, but like I said, no better perfect ending,” Beyers said.
Beyers also hit a season-high in three-point attempts and made three-pointers, going six for ten from the field.
“I definitely was feeling it a lot more too coming into this game, not gonna lie. My teammates were looking for me, which was, I mean, they were getting me open so every time I saw an opening, I just let it go,” Beyers said.
During the last minutes of the fourth quarter, Ruhl recorded 3 assists, tallying a season-high of 6 at the end of the game, and hit a three to bring her point total to nine.
“I saw the clock and I saw four minutes and thirty seconds and thought wow this is really it, so I knew that I just had to give it my all,” Ruhl said.
It was clear the two seniors wanted to go out strong together as they combined for 11 of the team’s 22 points in the fourth quarter, as well as Ruhl’s 3 assists coming from Beyers.
“I definitely think going into this of course we were both looking for each other, but we were looking for everyone. It just happened to be she was open at the right time and I was open at the right time,” Beyers said.
Ruhl said they “were both definitely looking for each other,” to really go out there and get one another involved in the game as much as possible.
“I don’t think we could have gone off on a better note. Man, it was a perfect way to end the season,” Ruhl said.
Despite not having a post-season run this year, the Regals were able to give their seniors a memorable last game in the purple and gold with a season-ending victory.