Jozie Tangeman: Successful On and Off the Basketball Court 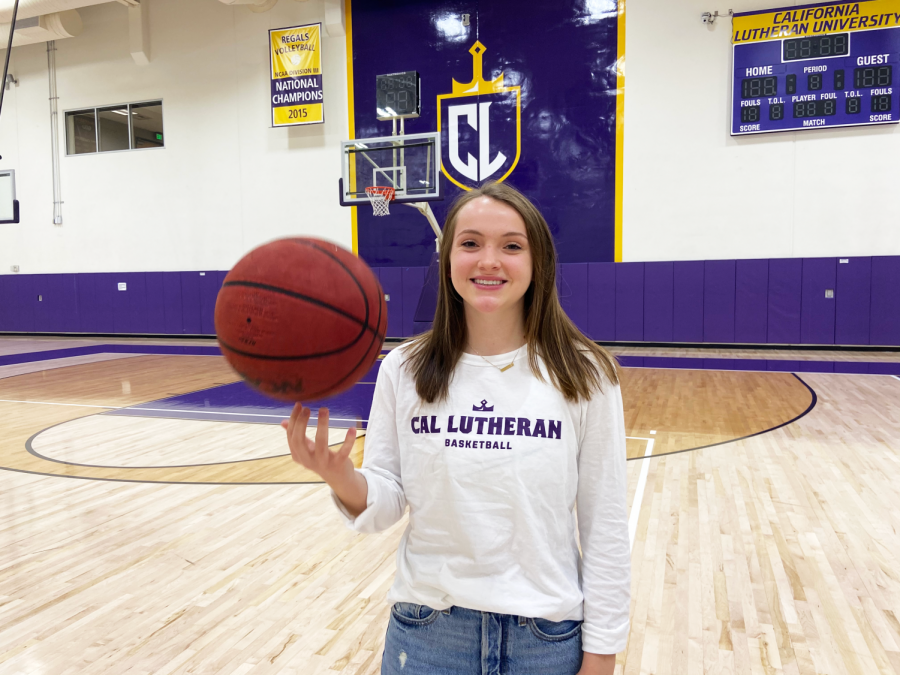 When junior Jozie Tangeman arrived at California Lutheran University, her success on the basketball court and in the classroom were immediate, and she quickly became a leader and friend for her teammates on the Regals basketball team.

As a top-scorer for the Regals, Tangeman has had a strong impact in every game. This season, she had a career high-scoring game against Pomona-Pitzer, dropping 23 points.

Tangeman started in 23 games during the 2019-2020 season. She also had a 10 game streak of scoring in the double digits.

Her competitive spirit and love for the game has been stirring for years, as she started her basketball career at 6 years old. Playing up an age group each year, Tangeman has always had the determination to compete and improve.

As a student athlete, Tangeman has been inducted into the Cal Lutheran Scholar-Athlete Society in both her freshman and sophomore years, a testament to her dedication in the classroom.

“I think all the girls really look up to her, and I think she works so hard on the court and with the grades too,” DiMuro said.

Along with the fun of the game, Tangeman’s favorite part of playing basketball is the relationships that come out of it.

“It’s been a lot of fun every year playing with my teammates and they’re, like, my best friends,” Tangeman said.

Her relationship with her teammates and coaches has stemmed from her charismatic personality, her sense of humor and her ability to connect with them.

“She’s just an all-around fun person to be around, and I think that is a lot of what we want in this program,” DiMuro said.

Even with a change in the coaching staff this year, Tangeman has felt continued feelings of love, support and camaraderie among the team.

As for her future with the Regals, DiMuro is excited to see what comes in her senior year, and is optimistic about what she will continue to bring to the table.

In high school Tangeman played on the varsity team for four years, and during this time, she decided that she wanted to continue her basketball career into the collegiate level. After going through the recruitment process, Tangeman committed to Cal Lutheran during her senior year, citing the location and small size as strong appealing qualities.

“It’s always just felt like a family, like, even when starting school. It’s pretty small here, and the Thousand Oaks community is just so tight-knit, and that always translated to playing basketball here,” Tangeman said.

Tangeman is a business administration major with an emphasis in sports management. While she doesn’t know exactly what her career aspirations are, she knows that she always wants her life to involve sports, in whatever capacity that may be.