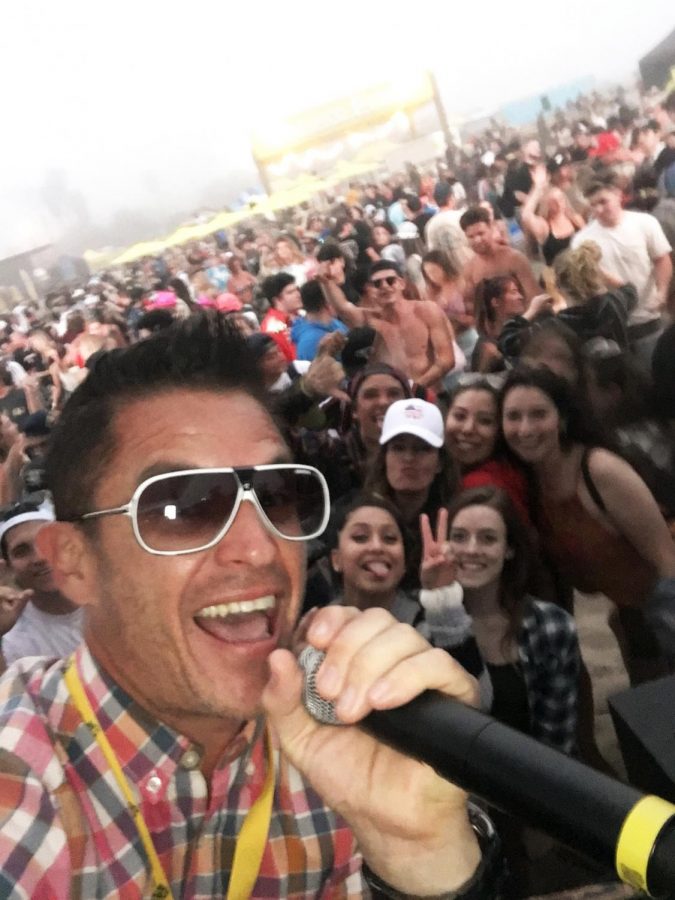 Spencer Fischer, an adjunct communication professor at California Lutheran University, is in his fourth semester teaching the iCLU Radio course which he calls the “Broadcast Gladiator Academy.”

“Radio class is always fun as well as challenging,” senior Antonia Wada, a student in Fischer’s class, said in an email interview. “He’s not your typical professor and never lectures, but creates a discussion effortlessly, which inspires us to be ourselves through the radio medium.”

Fischer incorporates many guest speakers, famous people and personnel from the radio industry including news-casters, comedians and radio personalities.

“Everybody is highly interested in what the future of broadcast has in store, and to be part of it is huge for these people, because we all remember who showed up for us,” Fischer said.

By exposing his students to experts in the field, Fischer hopes to share more about the industry and how students can benefit in their future careers and endeavors.

“He wants us to succeed, not just in his class but in life. He offers himself as a resource for career exploration, and exposes us to people who are living their dream so that we may be motivated to go for our own,” Wada said.

Graduate student Kyle Tam-kin, the president of the radio club on campus and friend of Fischer has also been able to learn and benefit from Fischer’s teachings and experiences.

“He always has really positive energy,” Tamkin said. “He’s also taught me that criticism only makes you better.”

Wada said she also has benefited from Fischer’s teachings in his radio class.

“I’ve also learned some self-love. I’ve learned to be easier on myself and also to give myself some credit,” Wada said.

Fischer credits his students for providing a mutually beneficial relationship.

“I am building entertainers,” Fischer said. “When I get to play with blossoming broadcasters, the purity of the sport is not lost on me, and hopefully it’s not lost on them.”

Through his experiences, Fischer recognizes the important steps and skills it takes to make it into the entertainment and radio industry, which most importantly includes getting experience through internships.

“You have all the power in the world when you’re an intern. You will penetrate offices, doors, executive levels and will cover mass amounts of ground,” Fischer said.

Fischer also teaches  correct microphone techniques, hav-ing overall knowledge of equipment and having the ability to emotionally connect with an audience.

“You have an opportunity when you turn the microphone on, to emotionally connect, and if you do it right, you will never be forgotten,” Fischer said.

Although he is a part-time faculty member at Cal Lutheran, his titles do not stop there. Fischer is a radio personality, DJ, club promoter and musician.

Fischer was born and raised in Simi Valley, California. He lived in Canada for one year, until he moved back and graduated from Simi High School. Fischer went on to attend Moorpark College, and knew he wanted to be involved with music.

“Moving to Canada gave me a chance to overhaul exactly who I wanted to be, I knew music was important to me,” Fischer said.

Fischer credits his career to a career development class he took in Canada. Five of the seven recommended career paths had to do with radio and television, Fischer said.

Throughout his time in high school, Canada and college he was actively involved in music and played in several bands.

One day, Fischer called KROQ, a Los Angeles radio station, from a payphone at his job and talked to a phone screener. To Fischer’s surprise, he got an interview the next day, and was hired the day after to begin his two year job with KROQ.

Fischer worked other radio jobs, including a radio network in Hollywood, 92.9 KJEE in Santa Barbara and 103.3 The Vibe.

“I went from grossing less than $20 per day from my second radio job, to a $60,000 morning show guy two years later because I had created this whole thing, so that was validation I was on the right path,” Fischer said.

Fischer is a comedic personality in his own radio experiences. He accredits Kevin and Bean, Stephen Colbert and Jimmy Kimmel, for inspiring his work.

“I can be inspired by another person’s comedic energy,” Fischer said. “I’m always trying to be funny, there’s power in comedy.”