BSU takes CLU “Back in Black” 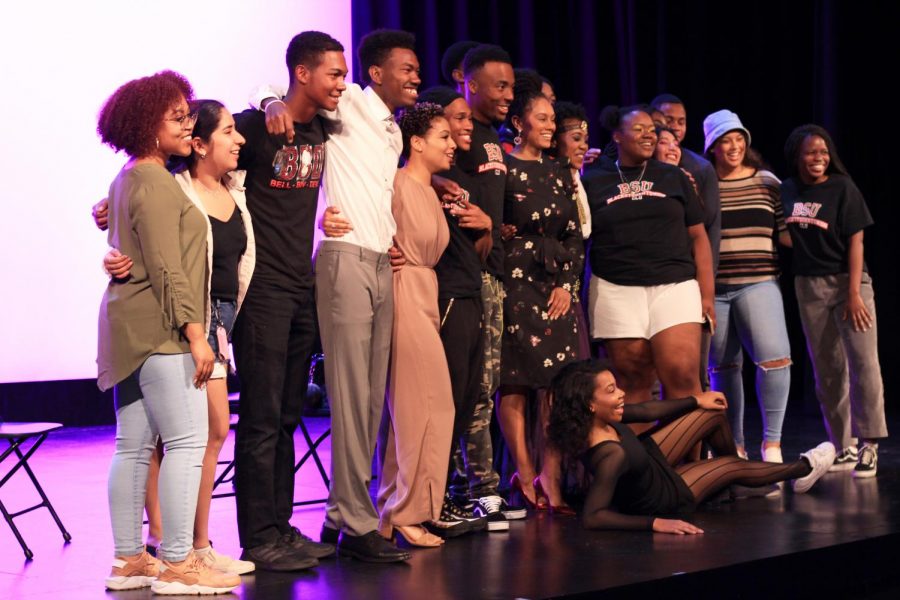 The cast of BSU's original production "Back in Black" pose together after their final showing.

California Lutheran University Black Student Union’s original play “Back in Black” written by Ruby Lee Dove II, an actress and producer best known for her work in “Soft Matter,” “Blood and Matter” and “High Q,” received kudos from Los Angeles-area National Association for the Advancement of Colored People leadership and brought in hundreds of audience members during its three showings over the weekend.

The stage was set with specific lighting to emulate the emotions displayed by the actors onstage as the play walked the audience through different time periods in American history, from the Civil Rights Movement, speeches by Malcom X, to kneeling during the National Anthem in NFL games in present day. The costumes reflected the different eras and allowed the audience members to fully immerse themselves in the production they were watching.

“The play was written in a way where it takes an outsider through a trip in black lives and experiences,” BSU President Urael Blackshear said. “We’re trying to encapsulate a lot of different themes within black culture during our one hour play. It will take the audience and people from the outside perspective and let them step foot and see what it’s like inside the mind of a black person. It definitely is going to be one of those experiences where you learn something from the underlying and explicit messages.”

Blackshear said they began planning the play last semester and brought in Dove to help with the writing and production. “She came back a week later with a script,” he said.

Dove said the play however, was not her own. “This show was very special to me because it wasn’t about me, it was about the students and what they wanted. I felt like it was my responsibility to help them bring their vision to life.”

Following the recent racially-charged incidents on the Cal Lutheran campus, there has been increased discussion regarding situations which people of color have been discriminated against, targeted, and dismissed on campus. “Back in Black” aimed to highlight those experiences and inform those who attend on the experience from targeted individuals. The play used historical accounts to connect present day with past precedent.

Taylor Love, Costume Designer for “Back in Black” said “I think it’s important to the community because this community needs something like this, they don’t realize how bad it truly has been for African Americans. A lot of people just chalk us up to stereotypes and call it a day, when we are so much more than that.”

In 2018, Cal Lutheran put on a play for Black History Month that was not well received by many members of the school community. “The Colored Museum” is a widely known controversial play that portrays American black stereotypes in a “satirical” way.

“The messages and the ideas that were displayed in that play and after that bad experience with the Theatre Department prompted us to create our own production,” Blackshear said.

NAACP Vice President Joe Gatlin also took the opportunity to commend BSU and Dove for their work. “I was proud enough and old enough to be a part of the Civil Rights Movement in the 60s. I had the privilege of working with Rosa Parks, when I heard you guys doing Maya Angelou and Nikki Giovanni, I thought: wow this is so special.”

“This play has always been important to us because as a community, throughout history and time, especially in theatre we’ve been put in spaces where we can’t be ourselves or act like ourselves,” Blackshear said.  “We’ve been put into a box where we can’t express our art in it’s true form without someone else coming along and being a caricature of who we are. There’ve been a lot of times and occurrences where we’ve either felt powerful and god-like or on the complete opposite side of the spectrum, where we feel down, under the dirt and beneath the earth.”